Air New Zealand’s shares were down 0.8% yesterday. CEO, Rob Fyfe, told The Australian that he expects it will take up to three years for the carrier to fully recover from the global economic crisis, adding that although demand is now improving, the carrier is yet to see a significant improvement in yields.

Mr Fyfe added, “I'd say at the moment we're in the early stages of fragile recovery but we are far from out of the woods”.

“The industry has taken a turn for the better”: SpiceJet

SpiceJet’s shares gained 1.0%, as the carrier’s CEO, Sanjay Aggarwal, commented that the aviation industry has "taken a turn for the better…we are looking forward to a good quarter ahead”. This reflects similar comments made the day earlier by Kingfisher Airlines, which expects “buoyant” demand to continue, seeing improvements in premium and economy yields.

Also in the Asia Pacific region, Air China’s shares gained 5.6%, while shares in Qantas and Cathay Pacific also improved (up 2.1% and 0.4%, respectively). Singapore Airlines’ shares were down 0.7% yesterday. 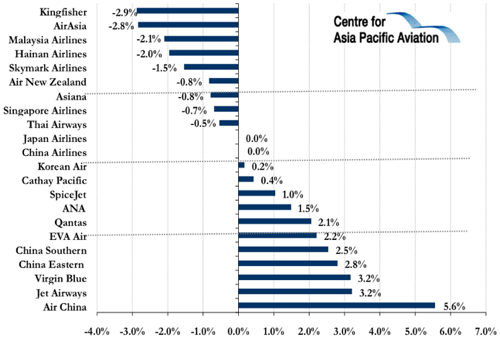