No easy answers for US airlines as staff furloughs loom large

In order to avoid massive industry furloughs on 01-Oct-20, US airlines and labour groups have been engaged in an intense lobbying effort to expand payroll support, and the likelihood of the country’s Congress actually passing the necessary legislation for more funding is fading fast.

There are arguments for and against an extension of the support – delaying the inevitable, versus swelling the ranks of US employment numbers, which will further create a drag on the country’s economy.

But the debate over the pros and cons of additional payroll support is likely to be over soon as inaction by the Congress renders the discussion irrelevant.

And if even if airlines can buy more time with additional payroll support, no one can predict how the industry will look in Mar-2021 when the proposed funding would expire.

The USD25 billion that US airlines received in Apr-2020 from the US government helped preserve jobs, since the industry was forced to shrink quickly as demand dried up due to the rapid spread of COVID-19, and because of the lockdowns and border closures that ensued.

The virus is now undergoing a resurgence in Europe, and case counts in the US are also rising again. A movement off the bottom in US demand from May-2020 to Jul-2020 was short-lived as US cases spiked.

As the reality set in that the COVID-19 crisis would linger well into 2021, the general consensus emerged that demand would not fully recover until a reliable vaccine was widely available. IATA is now calling for rapid testing for travellers before departure, but it will be challenging to unite governments to institute testing policies in the short term.

In the meantime, while some US airlines have cited slightly positive trends in leisure bookings, the reality is that capacity cuts are still not equal to the severe decrease in traffic, according to data from the US trade group Airlines For America. 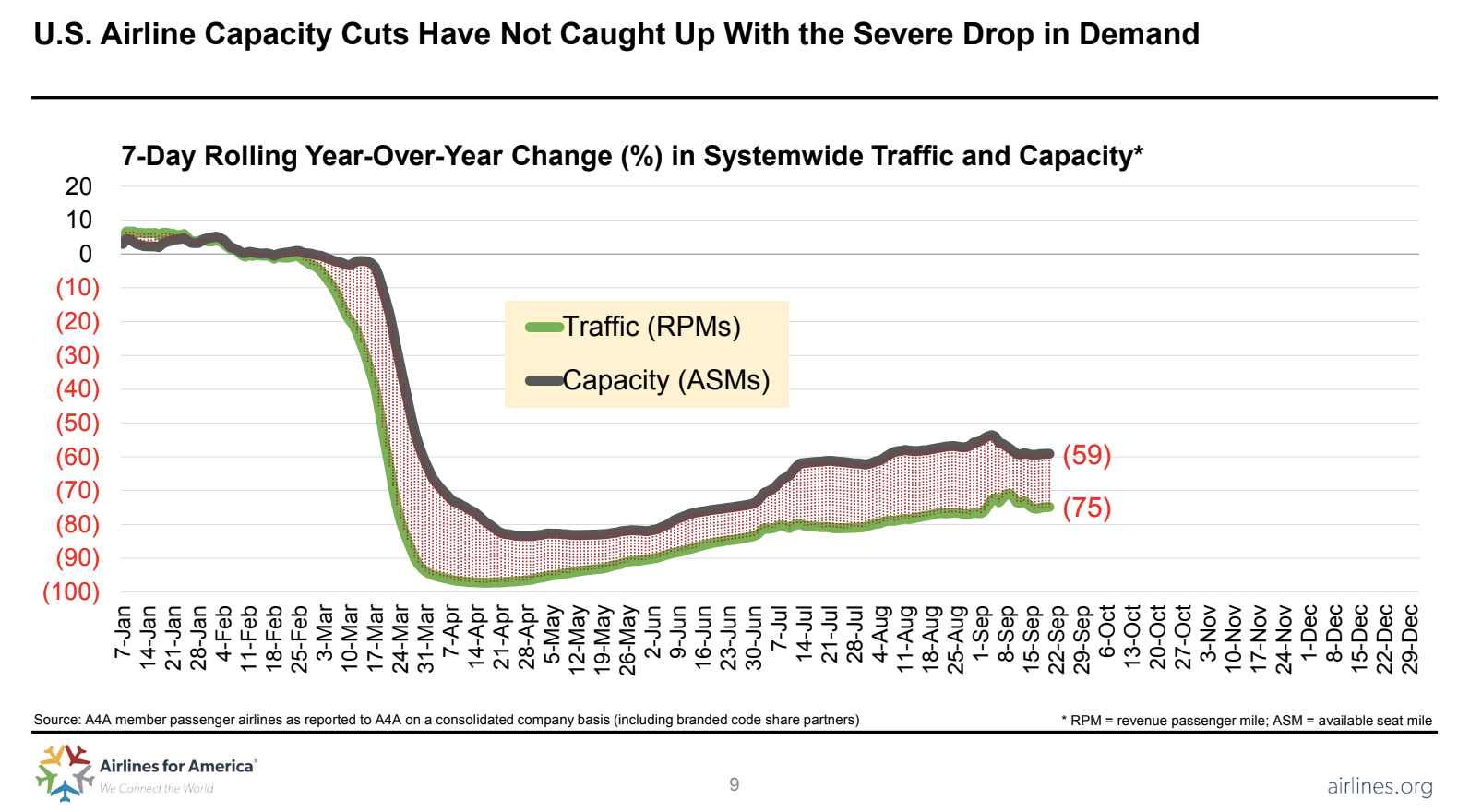 CAPA’s fleet database shows that 2,794 aircraft in the US remain inactive, and it is unlikely that a significant amount will return to service during the next couple of years. 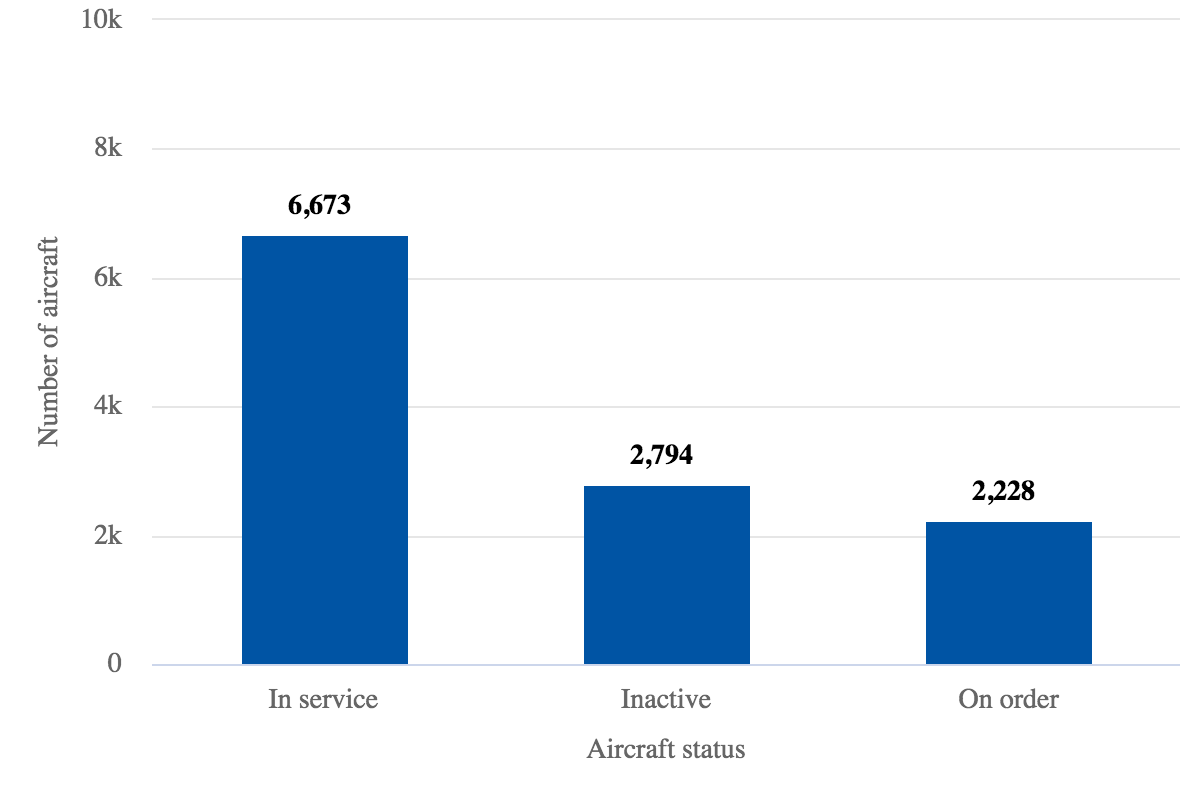 Tough to determine which argument about airline furloughs is correct

As the recovery forecast has increasingly turned bleaker, US airline executives and unions have joined together to lobby Congress for an extension of the payroll support programme to Mar-2021, in order to avoid involuntary furloughs of thousands of employees.

One argument against the extension is that the US airline industry will be considerably smaller for years to come, and airlines will essentially be overstaffed.

But American Airlines CEO Doug Parker recently told MSNBC that the aid would keep those employees off the unemployment rosters, and allow those individuals to maintain benefits.

For the week of 14-Sep-2020, more than 824,000 people filed for unemployment insurance. The country’s unemployment rate stands at more than 8%, and will no doubt rise if thousands of airline employees are abruptly laid off. More than 70,000 employees have received furlough notices, and while the number of actual furloughs will be lower, they will be significant.

Those furloughs could also have trickle-down effects on the US economy in key metrics, including consumer spending.

So, the quandary is what is the best use of American taxpayer money — a payroll extension that could avert further economic decline, or the payout of unemployment benefits to up to 40,000 furloughed airline employees.

Even with the stepped-up efforts by the US airline industry lobbying Congress for an extension of payroll support, legislators are distracted by bigger political issues at play.

The US Congress has remain deadlocked in broader COVID-19 relief for the country. Two legislators have introduced a separate stand-alone bill for aid to airlines, but that specific piece of legislation may not have enough traction to clear legislative approval before the 1-Oct-2020 deadline.

As Cowen & Co analyst Helane Becker points out, some airlines have reached agreements with unions to push furlough dates out in hopes that some type of aid agreement will materialise. United has reached a deal with its pilots to avert layoffs until Jun-2021 in exchange for the pilots spreading out its current reduced schedule among the ranks.

“But ultimately a fleet and headcount reset is probably needed until traffic comes back”, Ms Becker said.

There is a growing consensus that traffic will not return to 2019 levels until 2024, which means that airlines could be significantly smaller for quite some time.

If widespread programmes of testing and contact tracing could be implemented more rapidly, some of the pent-up demand could be unleashed as travellers adjust to a new reality and accept that protocols for air travel will change significantly for the foreseeable future.

But those are big “what ifs”, and even with the breathing room new financial support would bring, the reality is that airlines worldwide are still navigating unprecedented territory, which will be the case for some time to come.

There are no easy answers as airlines worldwide try to determine the right size of their businesses as COVID-19 remains a reality for the foreseeable future.

In the US an unfortunate day of reckoning is approaching, and the pain will be felt far and wide, as no one could have predicted six months ago the dramatic upheaval occurring in the global aviation industry.