Cambodia was building its tourist industry before the coronavirus pandemic while never seriously challenging neighbouring Thailand.

More than five years ago two new international airports were authorised, of which one is the New Siem Reap International Airport, which will serve the country’s main tourist attraction – Angkor Wat. The existing airport does that but it is so close to the World Heritage Site that emissions and noise are having an impact on the Buddhist temples there.

Cambodia is now attempting to get back on track, with this and another new international airport for the capital, Phnom Penh, neither of which involves the existing operator, the French company VINCI. Instead, a Chinese investment house has been selected for the Siem Reap development.

The question is: can tourism be revived (COVID is still a major problem here); how soon; and can western tourists be attracted to Cambodia in greater numbers?

The largest airport in Cambodia, physically

Cambodia's Prime Minister Hun Sen stated recently that Siem Reap New International Airport (SRNIA) would play a major role in increasing the country's economy and tourism when it opens in late 2023. Mr Sen said, "This large scale international airport will bring a boost to the economic development in our northern region, including the provinces of Siem Reap, Oddar Meanchey, Kampong Thom and Preah Vihear".

The USD880 million project, which began in Mar-2020, will span 700 hectares and is set to be the largest airport in Cambodia, in a 750-hectare space. It will be operated by Angkor International Airport Investment, which is a JV between three Yunnan companies, including Yunnan Investment Holdings, which signed a 55-year concession with Cambodia's government in 2017.

When the project was first conceived a figure of USD1 billion was considered accurate, and it has since risen back towards that level (allowing for currency fluctuations).

Siem Reap is the fifth largest city in Cambodia as well as the capital and largest city of the Siem Reap Province, which is in northwestern Cambodia.

Siem Reap is probably the most tourist-oriented city in Cambodia and was selected as the ASEAN City of Culture for the period 2021–2022.

Apart from traditional Southeast Asian attractions based around regional culture and heritage, Siem Reap has a cosmopolitan nightlife scene.

More significant though is its proximity to the Angkor Wat Buddhist temple complex, which is the largest religious complex in the world by land area, is Cambodia's most popular tourist attraction, and is a UNESCO World Heritage Site.

Angkor Wat is a significant tourist destination but although it ranks in the Top 10 of World Heritage sites, it does not feature in the Top 50 of most visited tourist attractions. Angkor Wat features highly in the raison d’être for the new airport, which has been a subject of discussion since 2010, the Cambodian government seeking to “protect” the World Heritage Site.

The existing airport is situated only two kilometres away and any expansion would inevitably have an impact on the temple complex, including its foundations, and on other religious buildings nearby. Indeed, even now aircraft noise is believed to play a part in the deterioration of the complex.

The original price estimate for the project, in 2016, was USD88 million.

A doubling of international tourists was predicted before the pandemic; ‘the new Thailand’ is the vision

But tourism is a factor in another way.

Two years later Prime Minister Sen said new airports in Siem Reap and Phnom Penh needed to be built to handle a projected doubling of international tourists, adding that there was an additional need to improve Sihanoukville International Airport to handle more traffic. He argues that Cambodia's existing three international airports were not expected to be able to accommodate traffic demand by 2025, with international passengers forecast to increase from six million to 12 million per annum.

Of course, that did not happen on account of the COVID-19 pandemic, but the projects have continued anyway as the Cambodian government is keen that the country should be the ‘new Thailand’ for tourists.

A CAPA article in Jan-2022 reported on the progress of the USD1.5 billion new Phnom Penh International Airport.

See related CAPA report: New Phnom Penh Airport: to be one of the world’s largest by land area

Strong tourism growth over a decade but not from the west 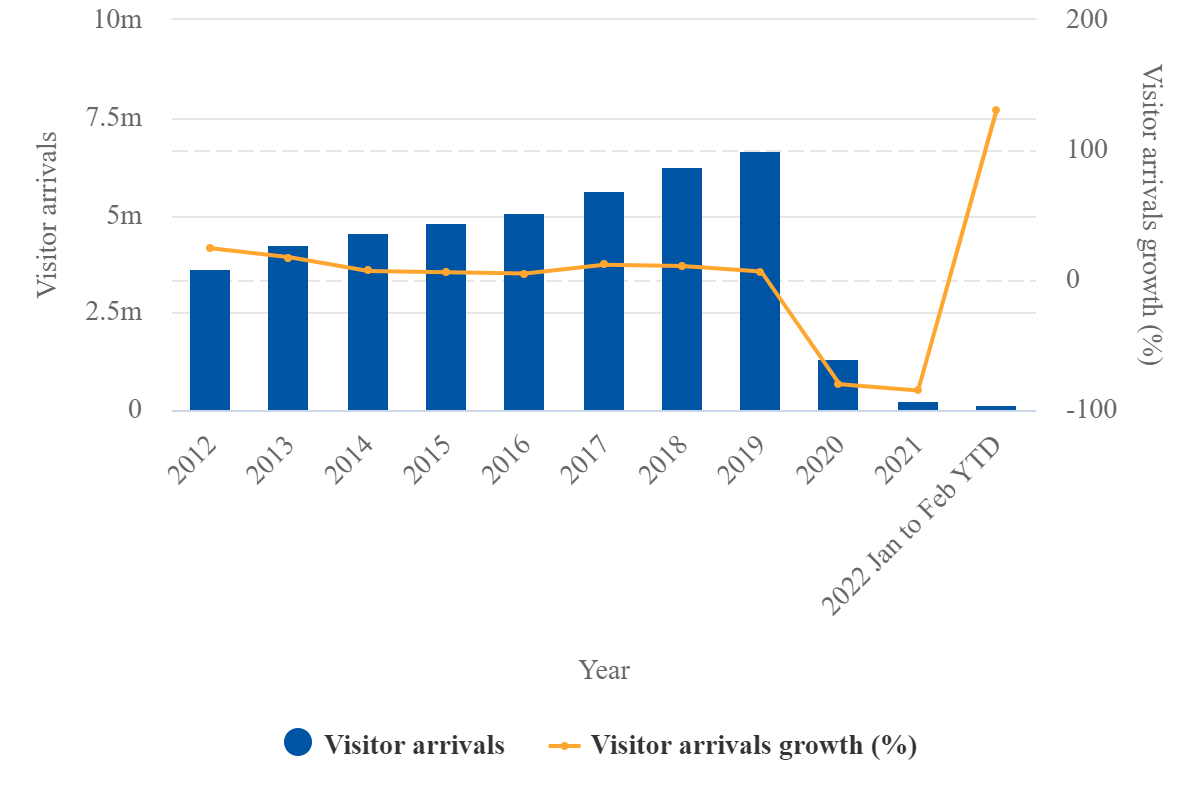 Source: CAPA - Centre for Aviation and Ministry of Tourism Cambodia.

With China likely to remain in a period of flux for some time it is incumbent on the tourism authority to market the country harder outside Asia, and a new airport will invariably help to do that.

There has been a degree of controversy about the contract to construct and operate the airport.

In Dec-2016 the Cambodian government decided to reassign the contract from Cambodia Airports, in which VINCI Airports is a 70% shareholder, to Yunnan Investment Holdings Ltd (YIHL). The government was required to compensate Cambodia Airports for ending its concession prematurely, although it will not be disbursed until the new airport starts operations.

The contract brought to an end – at least for the moment – VINCI’s ambitions for its further integration into the fabric of Cambodia’s airport network by way of BOT deals. The company had faced some criticism from the government about a perceived lack of investment at the Phnom Penh and existing Siem Reap airports.

The airport will be operated by Angkor International Airport Investment, which is a joint venture between three Yunnan companies, including Yunnan Investment Holdings. Shanxi Mechanisation Construction Group also won a bid to build two sections of the new airport for USD42.2 million in 2018.

Yunnan Investment Group is an investment holding company with 18,000 employees. It is engaged in the fields of finance, information, major scale healthcare, energy, railway, poverty reduction, cultural tourism and modern agriculture and forestry.

Prime Minister Sen is believed to have invited Yunnan Investment Group to launch more tourism, agricultural and railway investment projects in Cambodia, in order to maximise the impact of the airport when it is built and to promote local economic development.

An ‘agricultural’ airport city development is part of the deal

In the meantime, Yunnan Investment Group will make use of the comprehensive development land around the airport to establish an airport industrial park, so as “to create an ecological agricultural product processing base and high-end production and manufacture base, and promote the economic development of Cambodia”.

The operating concession on the airport will last for 55 years. The airport will have a maximum handling capacity of 10 million passengers per annum and will be developed in three stages, having the capability to handle Boeing 737 and Airbus A320 aircraft after completion of the second stage.

It is understood that concessional loans were made available by the Chinese government to assist in the project’s development and with the rehabilitation of existing railways, and also for the study and development of new railroads from Poipet City to Siem Reap province and from Siem Reap province to Phnom Penh.

Once completed, the airport is intended to solve overcrowding issues at Siem Reap Airport and therefore should not be considered as a ‘replacement’ airport, for the moment at least.

Strong passenger growth at the existing airport; but for now, with COVID still rife, utilisation is very low

The existing Siem Reap airport, which is also known as ‘Angkor Wat,’ is the second busiest in the country after Phnom Penh International.

The passenger traffic at the airport, over the same timescale as for national tourism, displays a similar trend, with average growth of 10.6%. 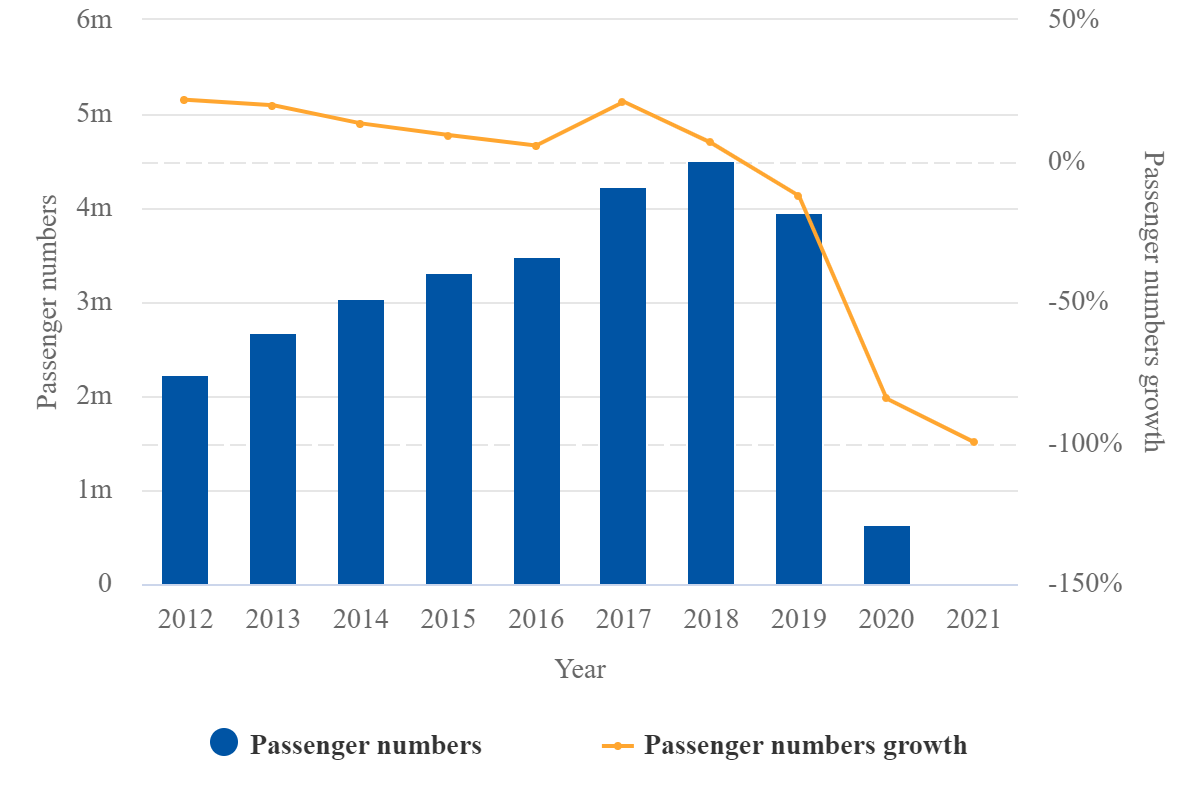 Source: CAPA - Centre for Aviation and Cambodia Airports and VINCI.

As in many other countries in Southeast Asia, COVID recovery has been slow, and in Siem Reap’s case its seat capacity continues to bounce along at marginally above what it has been for the last two years, with a total of just 3,800 seats in the week commencing 11-Apr-2022. 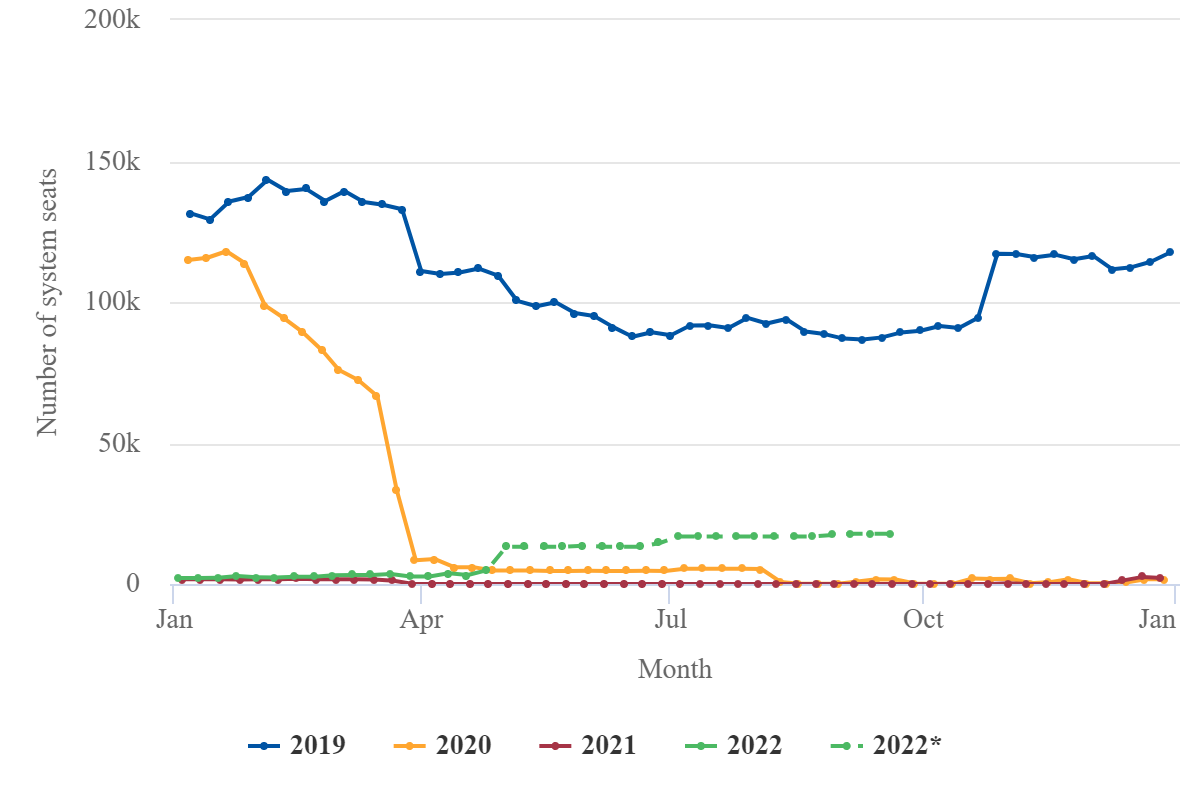 One benefit accruing to the airport is that 67% of that capacity at least is on Singapore Airlines, which is currently one of the more active of Southeast Asian airlines, thus ensuring a continuing global connection through Changi International Airport. That will offer a base starting point to rebuild traffic in anticipation of the opening of the new airport.

On the other hand, substantial recovery needs to start soon.

As of the date this article was written, only three of the 24 hour blocks had any arriving or departing activity. 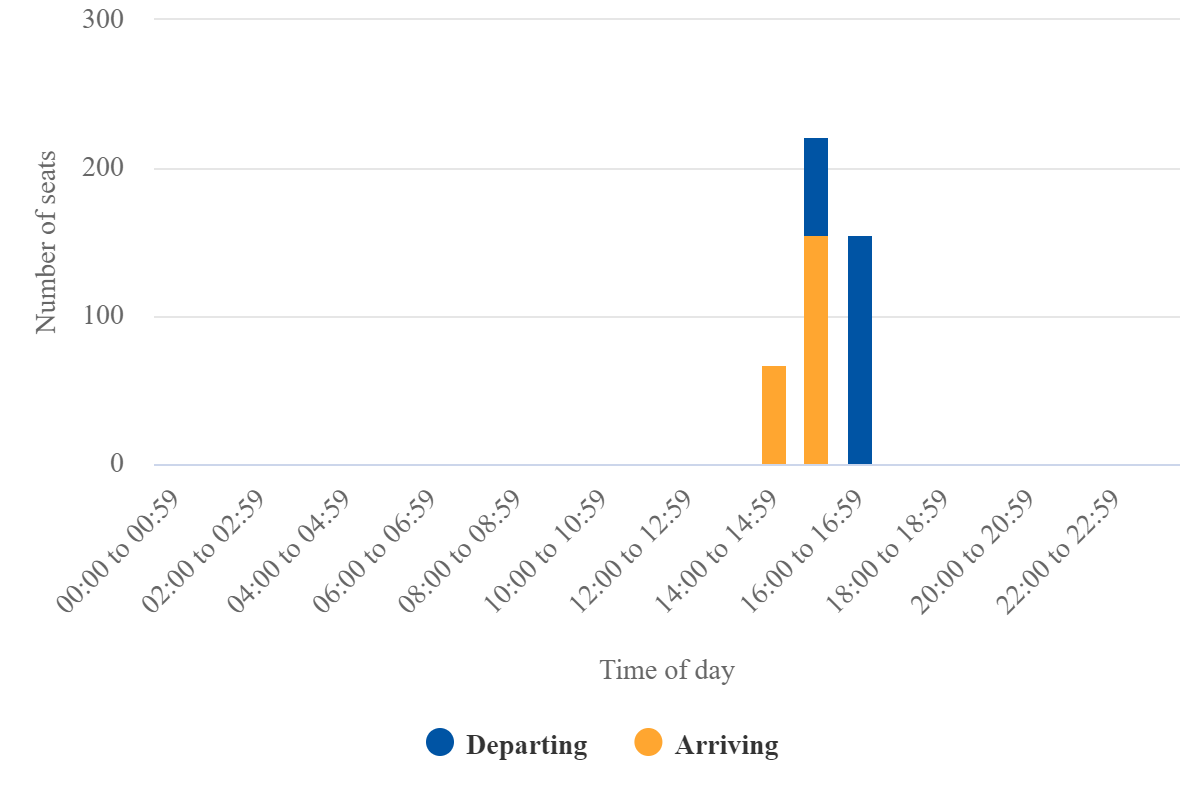