New Orleans Louis Armstrong International airport posted record passenger levels for the fourth consecutive year in a row for 2018, which cements the airport’s status as one of the fastest growing medium sized airports in the US.

Although Southwest remains the airport’s largest airline, the ULCC Spirit is New Orleans’ fastest growing operator, offering service to 20 destinations from Louis Armstrong International. New Orleans is one of the key leisure destinations that Spirit has selected for expansion, and it has achieved a double digit share of enplaned passengers.

The airport marks a major milestone in 2019 with the opening of a new terminal that will support continued growth. The project has had its fits and starts, but ultimately should create new levels of efficiency for both airlines and passengers, compared with the airport’s current 60 year old terminal.

Another record year in 2018 for New Orleans International's passenger growth

New Orleans International airport handled 13.1 million passengers in 2018, which was the fourth year in a row of record passenger totals. Passenger levels at the airport have jumped 60% since 2010. 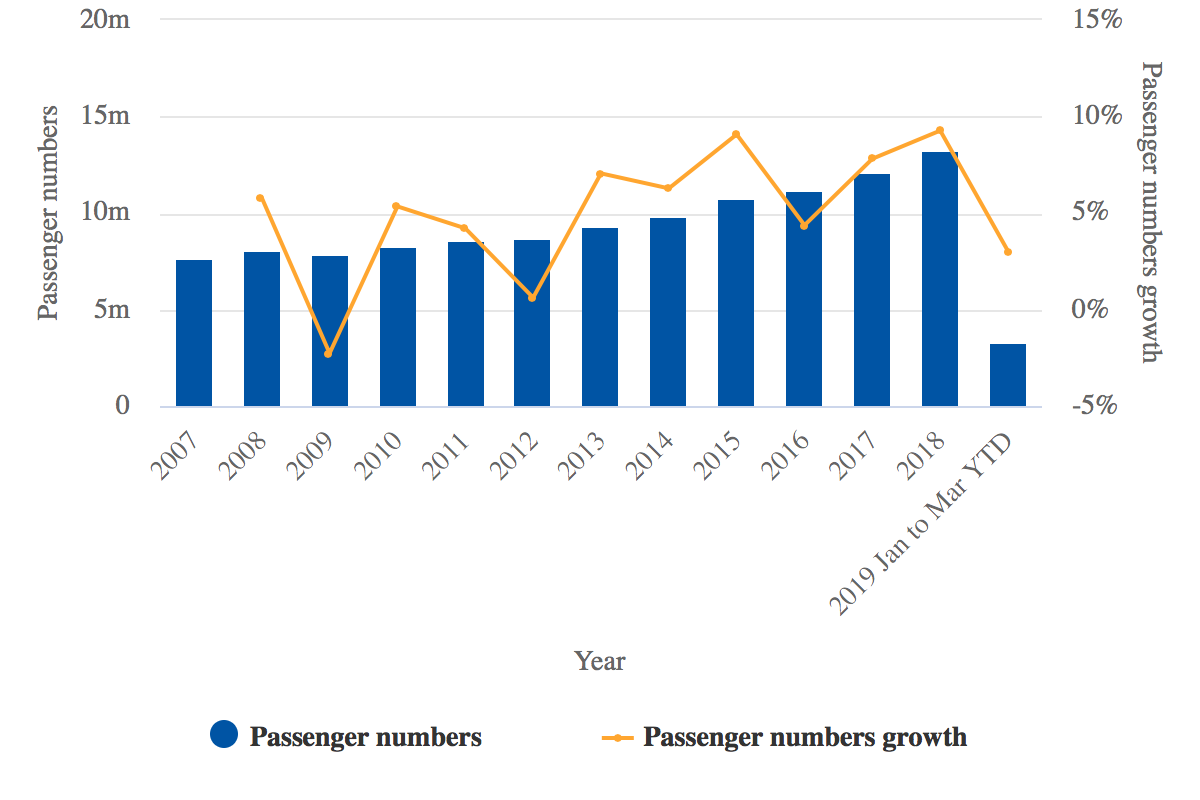 The city is a big tourist and convention destination, with nearly 18 million visitors arriving in New Orleans in 2017. The region is also working to diversify its economy, courting tech companies and other enterprises to leverage opportunities in the medical and research sectors.

Southwest remains New Orleans’ largest airline. The latest data released by the airport show Southwest had a 35% share of enplaned passengers as of Mar-2019, followed by American, Delta, United and Spirit.

Spirit has been rapidly expanding from New Orleans during the past year.

Data from CAPA and OAG show that Spirit is the airport’s third largest airline measured by seat deployment, with an approximately 14% share as of late Jun-2019.

New Orleans International percent of seats by airline, as of late Jun-2019 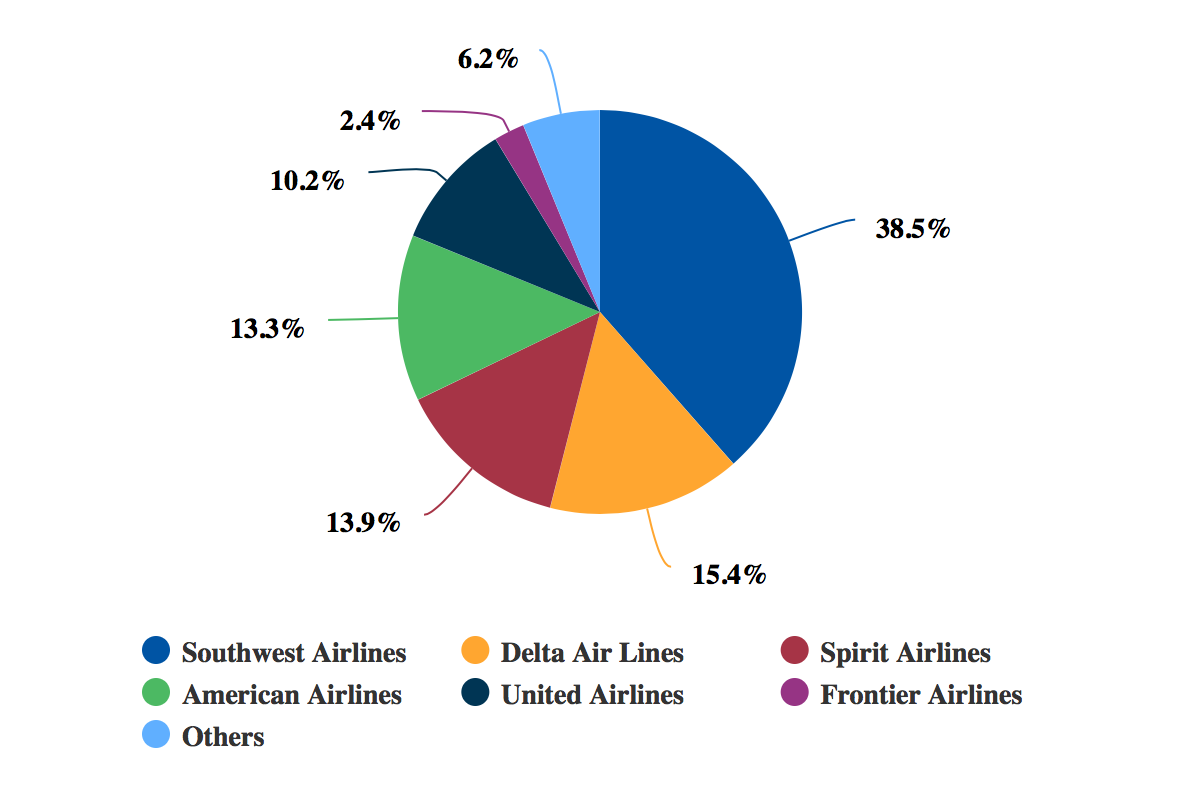 Spirit operates flights to 20 destinations from New Orleans and airport officials have said that the ULCC’s “price point makes air travel a viable option to more people in our area, and travelers are taking advantage of that”.

Southwest often refers to itself as the low fare leader, but Spirit’s cost base (USD5.46 cents in 1Q209 excluding fuel and special items) allows for its fares to fall far below Southwest’s and to attract more cost conscious consumers.

New service deployments from New Orleans by other airlines during 2019 include Allegiant’s seasonal service to Louisville and seasonal flights by Vacation Express to Montego Bay.

New Orleans secured a key victory in late 2017 when British Airways launched lights to London Heathrow, which is the airport’s only trans Atlantic service.

During 2019 New Orleans International will be opening a new terminal to replace the existing space, which opened in 1959. The USD1.3 billion project has encountered its share of setbacks. The opening has been pushed from May-2019 to 4Q2019, which is the fourth time the opening has been delayed, according to the local news outlet The New Orleans Advocate.

Once the 35-gate terminal does open, it will feature a consolidated checkpoint with 17 lanes for greater efficiency in security screening and an inline baggage system allowing passengers to drop off checked bags at ticket counters.

The Advocate has reported that the cost of the terminal project has grown from an original USD650 million to approximately USD1.3 billion, driven in part by the original estimate not including the cost of roadwork needed to access the terminal.

Similarly to so many other US airports in the midst of major construction projects, there is little doubt that New Orleans is working to keep its cost per emplanement (CPE) reasonable.

Both Austin and Nashville International airports are in the middle of expansion projects and according to an airport sustainability report, Austin’s cost per enplaned passenger in 2016 was USD8.38.

In 2018 Nashville had a blended cost per enplaned passenger (which combines charges for signatory and non-signatory airlines) of USD6.75. During 2015 Nashville executed a new lease agreement with American, Delta, Southwest and United, which are the signatory airlines to the deal.

A chart published by The Advocate shows that New Orleans’ CPE was as high as USD10.20 in 2009, before falling to a low of USD5.32 in 2017. The terminal project will drive some costs increases; The Advocate’s chart shows the budgeted CPE for the airport in 2019 is USD8.02.

nola.com has previously reported that the terminal project was being funded by general airport revenue bonds that are essentially paid for by the airlines operating at the airport. Federal and state grants have also been used for the project.

Balancing the expense of a new terminal with remaining cost competitive

New Orleans is enjoying a renaissance as it readies to open a new terminal. It is one of several US mid-sized airports that are in various phases of necessary facility upgrades to provide better service for both airlines and customers.

But New Orleans and all of those airports are also balancing the expense of those projects while ensuring the cost to airlines operating at their facilities remains reasonable – something that requires laser focus in order for medium sized US airports to keep enjoying sustained passenger growth.