ACI EUROPE has released its "Economics Report 2009", its first annual survey on the key financial and economic characteristics of the airport industry in Europe. The aim of the report is "to provide policymakers with an overview of the economic environment airports operate in, present detailed information on the costs and revenues of European airports while underlining the strong contribution of the airport industry to growth and employment in Europe".

Reflecting the economic and financial results for the reporting year 2008, 219 European airports contributed to the data collection, representing 1.223 billion passengers, or 82% of total European passenger traffic. In addition, aggregated data from the ACI EUROPE 2008 Key Performance Indicator Database and recent ACI EUROPE surveys have been used to complement the reported data.

The report commences by identifying that the European aviation sector has been badly hit by the economic and financial crisis, starting in mid-2008. Passenger and freight traffic collapsed at most European airports. While major hubs tended to show more resilience during the crisis, secondary hubs and smaller regional airports were particularly hit, and remain largely exposed to structural changes in the market place. This increasingly involves airline network concentration as a result of consolidation of legacy carriers and flexible redeployment of aircraft and crews by low-cost carriers (LCCs) – both factors leading to heightened competition between airports.

Table 1 – Distribution of revenues at all European airports in 2008

By analysing the total revenues of airports, excluding ground handling revenues, it is interesting to note that non-aeronautical revenues accounted for 47% of the total in 2008, including revenues stemming from airport retail, car parking or property income. This confirms the trend that airports are largely dependent on non-aeronautical revenues to finance their operations and invest in much-needed infrastructure modernisation and development – a key factor for offering competitive airport charges to their customers. Of course, all airlines (and particularly LCCs) now view "ancillary" revenues in much the same way (see below).

Furthermore, when looking at the total income of airports, it is interesting to note that only 21% of total airport revenues were aircraft/airline-related in 2008, ie those stemming from aircraft-related charges paid by airlines. Consequently, the financial burden for airlines in relation to airport charges is limited. According to the Association of European Airlines, representing major European network carriers, airport charges accounted for around 3.5% of total operating costs in 2008. However, given that low-cost carriers have a different cost structure, airport charges tend to represent a significantly higher proportion of costs for these carriers.

Chart 1: Non-aeronautical Revenues at European Airports by source 2008 in % 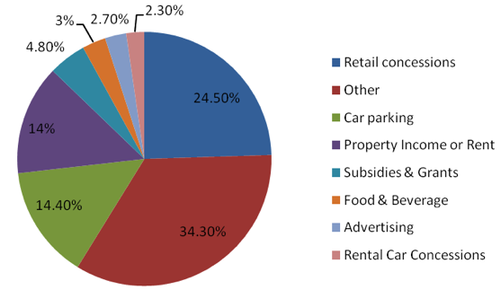 ACI EUROPE stresses “it is important to recall that without the contribution of non-aeronautical revenues, many European airports would not be in a position to offer a competitive level of airport charges to their customers. Commercial practices by some low-cost carriers that strictly limit the number of carry-on bags that passengers can take onboard, thus preventing them to carry separately, goods purchased at the airport, are therefore directly affecting retailing activities. As such, they are threatening the commercial viability of agreements with these carriers on low airport charges.”

Security costs constituted the single largest item of operating expenses. The security measures introduced both at EU and national level since the terrorist attacks in Sep-2001 required airports to make large investments in new security equipment and qualified staff at airports. It should be noted that the distribution of responsibilities in the area of aviation security and the respective cost recovery varies considerably within the European Union. In total, security staff and equipment represented 32% of total airport operating costs. Personnel (excluding security staff) is the second largest cost item, representing 24.5% of operating expenses. This relatively low proportion also reflects the fact that airports are less labour intensive but more capital-intensive: runways and terminals are large infrastructure projects requiring substantial investments. Other costs include items such as rental or concession fees to the government as well as administration, consulting and legal costs.

(Editor’s note). A sales and marketing expenditure proportion of only 2% may surprise some and may be representative of how some airports now allow airlines (especially LCCs) do their marketing for them, restricting their promotional efforts to contacts made at B2B trade events.

To put these results in perspective, aircraft/airline-related revenues only covered 31% of total operating costs in 2008. Hence, airports largely finance their operations through passenger-related charges and revenues from commercial activities. Even if all aeronautical revenues (passenger and aircraft/airlines-related charges) are factored in, airports had an under-recovery of EUR4.9 billion of operating expenses in 2008.

Due to the economic crisis and the turmoil on financial markets, capital costs increased at many European airports in 2008/09. While airports were generally still considered sound assets by investors, credit ratings for several airports were downgraded in the course of the crisis. In addition, some airports faced increasing difficulties to get the necessary funds to finance/refinance already committed infrastructure projects.

Capital expenditure at European airports totalled EUR11 billion in 2008. According to a survey conducted by ACI WORLD in mid-2009, these investments were expected to further rise in 2009 and to slightly decrease in 2010. Capital expenditure was expected to amount to EUR12 billion in 2009 and is forecast to reach EUR10 billion in 2010. It should be noted that these figures do not include new (greenfield) airports, only the modernisation and expansion of existing infrastructure.

The economic and financial crisis in 2008/2009 also affected capital expenditure projects at European airports. In 2009, airports reduced their planned CAPEX projects by EUR2.8 billion but confirmed most of their committed projects. Given that infrastructure programmes usually involve a long lead time and air traffic is expected to double by 2030, according to EUROCONTROL, airports need to invest in new infrastructure in a timely manner. At the same time, these large investment programs have acted as an economic stimulus programme in the current economic downturn.

In the area of employment, in reaction to the financial crisis many European airports have engaged in corporate restructuring programmes, often involving a substantial reduction of staff (up to -30% at individual airports). Therefore, staff figures are lower than in previous years. On a general note, however, one should keep in mind that airports have a limited leeway to reduce staff, as many functions at an airport need to be performed independently of actual passenger traffic – terminal maintenance, security etc – and as staff levels tend to be regulatory driven (in particular by security and safety).

Looking forward, ACI EUROPE reiterates that 2009 was a difficult year for the entire aviation industry. The reported data from 2008 already reflects partially the strong impact of the crisis. Given the decline of traffic in 2009 (-5.9% on average), ACI EUROPE expects a significant impact on revenues and costs for the reporting year 2009. The employment figures in the report hint at a major affect of the financial crisis on European airports in 2009. With regard to the economic environment in 2010, European airports expect a modest traffic recovery in the course of the year. Many airports have already announced positive traffic figures in the first months of the year, however, the volcanic ash crisis has seriously affected air traffic in Apr-2010 and to a lesser extent, May. Moreover, there is still significant uncertainty as to whether the expected economic recovery in Europe will directly translate into a sustainable rebound for the aviation sector in 2010.

A new aviation market structure is emerging in Europe, as network carriers remain under pressure to review their business models and low-cost carriers continue to grow. Airports will need to adapt to this new market structure and face increasingly powerful customers. This will result in increased pressure on airport charges, with airlines increasingly able to flexibly deploy and relocate their aircraft and crews at the most competitive location. At the same time, airports need to focus on the long term and invest in new infrastructure in order to accommodate the expected traffic growth in coming years. Access to finance, a supportive regulatory environment and a constructive collaboration with the airlines are therefore fundamental to tackle the challenges of the years ahead and to contribute to a sustainable growth of the aviation sector in Europe.