IATA expects that by the end of this year airlines certified to its New Distribution Capability (NDC) will account for 59% of global passenger traffic. However, while NDC has become mainstream in some regions such as Europe, it has so far struggled to catch on in Asia. Several major Asian markets still do not yet have any NDC-compliant airlines.

There are now close to 50 airlines globally that are compliant with IATA NDC Level 3 standards.

Only five of these airlines are from Asia Pacific excluding China: Qantas, Singapore Airlines, SIA's regional subsidiary SilkAir, South Korea-based T’Way and Taiwan-based China Airlines. (There are another 11 airlines from mainland China and Hong Kong that are compliant.)

Major commitments to NDC made by Qantas and SIA over the past year should push several of their peers to make similar commitments. Qantas and SIA are widely viewed as innovators and trendsetters in the Asia Pacific airline sector.

In May-2018 Qantas announced the launch of the Qantas Distribution Platform (QDP), which uses NDC and is aimed at enhancing the capabilities of its agent partners in airline retailing, booking and service.

Qantas is making “a very big investment” in NDC and is 100% confident it can meet a target of pushing 20% of its third-party (agent) transactions via NDC by the end of 2020, according to its senior manager distribution operations, Nathan Smeulders.

“We are very committed to our 20% target by 2020”, Mr Smeulders said at the Travelport Live conference in Jul-2018. “In fact, we would love to exceed that target. We think the way forward to do that is by working with technology providers like Travelport to bring the capability to our agency partners as quickly as we can.”

An increased sales capability and the ability to offer agents a full range of ancillaries are two main benefits of NDC. For Qantas, Mr Smeulders explained that NDC gives the airline the ability to control its offering and create an appropriate offering to potential customers, including more fare options and products.

Agents should benefit as they will have a more comprehensive offering than what they currently are able to provide. “This is actually quite game changing…. It is very exciting when you think about the sort of things an airline can provide back to the agent as part of an offer”, Mr Smeulders said.

In May-2018 SIA announced its first NDC connection, with Skyscanner. SIA sat on the fence with NDC for several years but within the past year or two has recognised the importance of making a commitment, according to SIA vice president ecommerce Bryan Koh.

“Singapore Airlines is a late starter to the NDC game but we are fully committed and we are building our merchandising engines and NDC capabilities”, Koh said at the Travelport Live event. “We want to play a leadership role and to help bring the entire industry forward.”

SIA is 80% confident that it can push 20% of third-party transactions through NDC by the end of 2020. The airline plans to spend the next two years building its NDC capability and having conversations with agents and technology companies to make sure that its new merchandising capability can create value for its customers in ways previously not realised.

Mr Koh pointed out that agents have talked for several years about how airline websites and other direct distribution options have taken away business, but NDC offers a way for agents to “join the party” and “be part of the new norm”.

Smaller airlines and LCCs in Asia have not yet committed

While most major network airlines in the Asia Pacific region will likely join SIA and Qantas in committing to NDC, there are bigger question marks on the participation of smaller flag carriers and LCCs – particularly independent LCCs. Some CEOs of large Asian LCCs are not even aware of NDC, even though they are IATA members.

Speaking at Travelport Live, CAPA's chief analyst, Brendan Sobie, said the lack of Asian LCC participation is a “major concern”. Some LCCs are searching for alternatives and several smaller FSCs are reluctant to make the investment NDC requires.

“There are a lot of smaller airlines out there that are waiting-and-seeing”, Mr Sobie said. “A lot barely know what NDC is.”

Agents attending the Travelport Live event asked (unanimously) if Qantas and SIA were using NDC as an opportunity to gain a competitive advantage over smaller airlines and raise fares. However, Qantas and SIA argue they are genuinely striving to advance NDC for the wider benefit of the industry.

“We definitely think it’s great for Qantas as it enables us to do things better and differently, but I don’t think there’s anything sinister in it”, Mr Smeulders said.

“We just want to be a leader and drive this forward. We are hopeful other carriers will come along. The more carriers that do this the better we are as an industry. That is our hope.”

Travelport global head of product and marketing Ian Heywood pointed out that IATA’s initial approach, after the NDC project was launched in 2012, had been “very poor” as it lacked collaboration and this partially explained why it has taken so long.

However, he said, at Travelport’s urging IATA has set up an agency council and is now talking to agents and working with corporates.

“We have been very proactive right from the beginning”, Mr Heywood said. “We believe we have a pivotal role in the industry making sure this works for everybody.”

He added: “It isn’t a question now of is NDC going to happen. It is happening. It’s more a question of how, what and why.”

Collaboration was the key takeaway message to airlines and agents attending the Travelport Live event. Airlines and agents can either join the programme and improve their customer offering or risk sitting on the sidelines and being exposed. 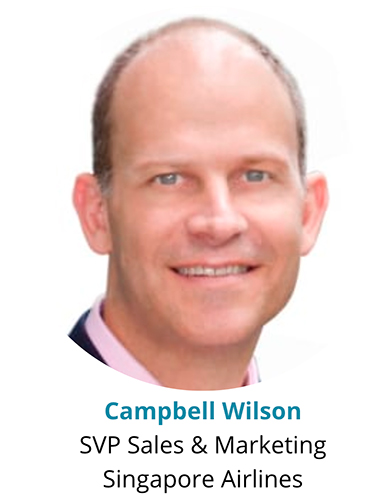 Similar questions and issues will be examined at the CAPA Asia Aviation Summit on 8-Nov-2018 in Singapore.
Singapore Airlines' SVP Sales & Marketing, Campbell Wilson will join Executives from Travelport, Amadeus and Skyscanner to participate in an NDC discussion at the CAPA Summit.