Air Canada followed its US legacy counterparts in posting a loss on rising revenues. Air Canada reported a net loss of CAD19 million in the first quarter, a huge positive swing from the CAD112 net loss posted in 1Q-2010. The company said the loss was softened by CAD104 in forex gains, down from the CAD123 in forex gains in the year-ago quarter.

The company also narrowed its operating loss CAD70 million during the first quarter when it posted an operating loss of CAD136 million. At the same time, it posted EBITDAR of CAD207 million, up CAD57 million over 1Q2010. The progress was made against a backdrop in which overall expense rose CAD164 million or 6% as its rise in operating revenues rose at a faster rate - 9% - or CAD234 million.

It, of course, cited rising fuel saying it was up CAD120 million over a year ago. The company added, for the year, the rising fuel would add an additional CAD800 million to operating costs. The company said while fully offsetting the fuel increase constitutes a challenge, it is pursuing capacity adjustments and other revenue initiatives such as fare and fuel surcharge increases.

While imposed during the first quarter, the full effectiveness of these revenue efforts will be seen in the second quarter. It is also pursuing incremental cost reductions beyond its Cost Transformation Program (CTP) programme - to identify and execute revenue and cost savings initiatives - which is expected to bring in CAD530 million in annualised savings this year. Such initiatives realised CAD330 million last year and, to date, the company has already achieved CAD440 million of this year’s target.

As with its US counterparts, it is tempering its capacity outlook shaving two points off its original projections of up 4.5%-5.5% systemwide for the year in response to fuel. Having previously announced it would cut capacity this year by 1%, it added another 1% yesterday for an overall cut for the year, thus far, of 2%. Consequently, system capacity will rise by 3.5%-4.5% on rising utilisation and Air Canada now expects to decrease its full year 2011 domestic capacity by up to 0.5% from the full-year 2010 levels. The system capacity increase is expected to be achieved primarily through the use of aircraft in Air Canada's current fleet. 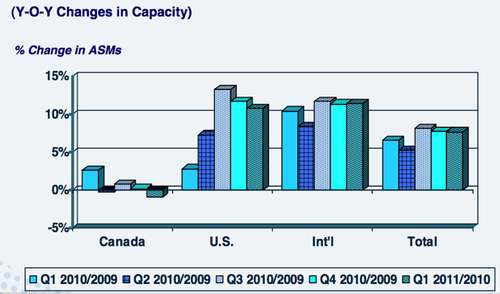 EBITDAR expectations for the first half - pegged at flat from 2010 earlier this month - will rise by up to 5% over 2H2010 levels.

Air Canada's outlook assumes that the North American economy will continue to recover in 2011. In addition, Air Canada expects that the Canadian dollar will trade, on average, at CAD0.97 per US dollar in the second quarter of 2011 and CAD0.98 per US dollar for the full year 2011 and that the price of fuel will average CAD90 cents per litre for the second quarter of 2011 and 88 cents per litre for the full year 2011.

CFO Mike Rousseau noted the carrier’s progress in raising revenues was despite the fact the year-ago period included a boost from the Vancouver Olympics and British Airway’s labor disruptions, making this 1Q-2011 even more impressive.

He reported that system passenger revenues grew CAD216 million or 10.3% on a 5.7% traffic growth and a 4.2% yield improvement, largely from fare increases and fuel surcharges. The 7.7% capacity growth came largely as a result of a 7.3% increase in aircraft utilisation.  He also said that premium-cabin revenues rose CAD 57 million or 13%, on a 12% jump in traffic. RASM increased 2.2% from the first quarter of 2010 on its yield improvement. Excluding the unfavourable impact of foreign exchange on foreign currency denominated revenues, RASM increased 3.3% in the first quarter of 2011. He also said fare and surcharges fully recovered the increase on domestic and other markets. 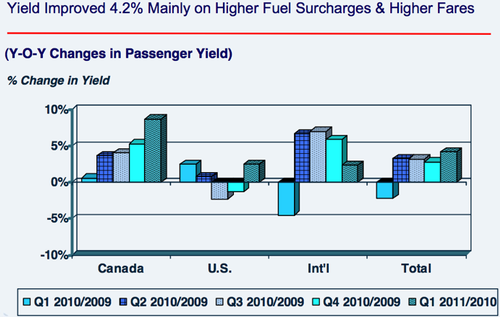 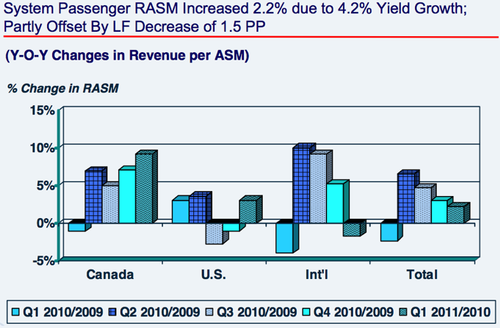 Other revenues rose CAD6 million to 336 million in the quarter for a 20% year-on-year increase in ancillary revenue per passenger.

System Revenues Increased 10.3% due to 5.7% Traffic Growth and 4.2% Yield Improvement 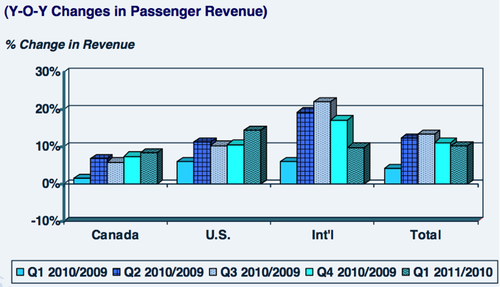 Interestingly, CEO Calin Rovinescu cited the addition of Virgin America into the Toronto market for the fact trans-border yield was weaker than his US counterparts. But not for long. He added the San Francisco-based carrier was now exiting the market. He expects yields to improve once that happens. 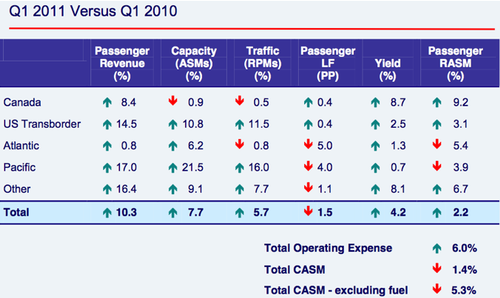 Mr Rousseau emphasised the importance of China to achieving Air Canada’s sustainable profitability targets, noting that while traffic to China was up 40%, capacity growth in the industry exceed traffic growth as North American carriers laid on a 30% jump in capacity.

As with its US counterparts, he reported that the Japanese disasters cost the company CAD3 million in revenue during March and projected they would add another CAD20-25 million on top of that in the second quarter.

The increased competition in the trans-Atlantic market, which all legacies cited, drove a .08% decline in travel.

Operating expenses increased CAD164 million or 6% from the first quarter of 2010, as system capacity grew 7.7%, coupled with a CAD123 million, or 20%, rise in fuel year on year. Offsetting the rising costs was the was the favourable impact of a stronger Canadian dollar on foreign currency denominated expenses -- reducing  operating expenses by approximately CAD63 million. Mr Rousseau described its forex gains as a natural hedge against fuel.

At the end of the first quarter, Air Canada's cash, cash equivalents and short-term investments amounted to CAD2.114 billion which represented 19% of 12-month trailing operating revenues. 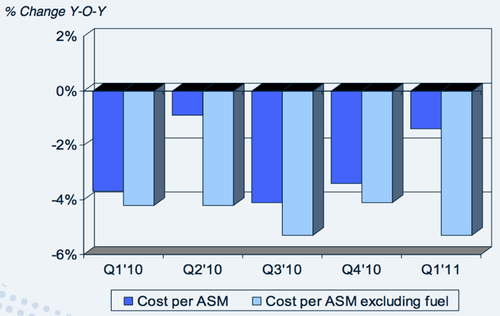 Passenger RASM Increased 9.2% Mainly Due to Yield Growth of 8.7% 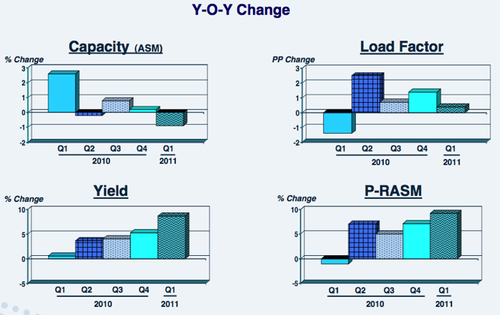 Passenger RASM Increased 3.1% Mainly Due to a 2.5% Growth in Yield 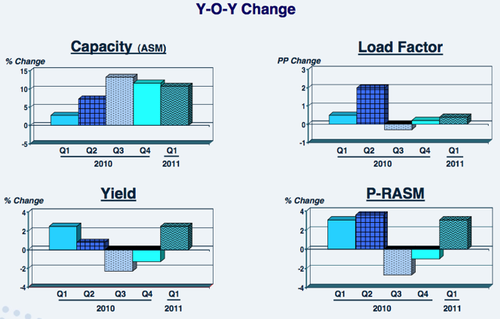 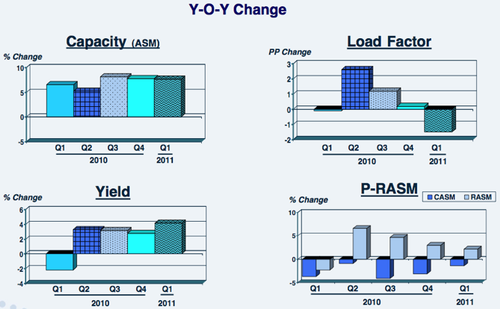 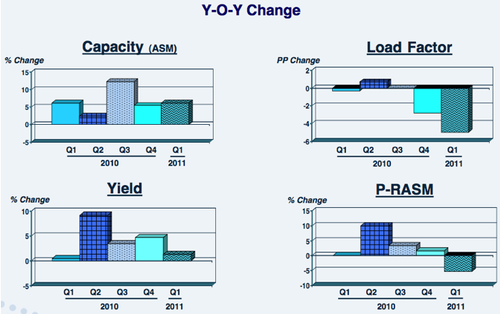 Passenger RASM Decreased 3.9% Mainly Due to 4.0 PP Decrease In LF 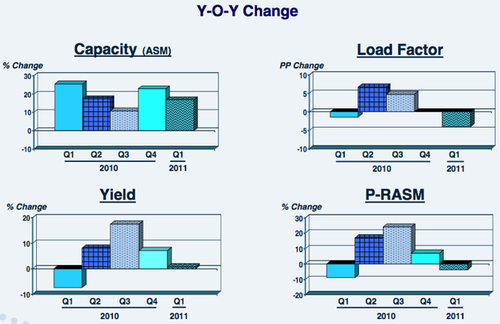