Shares in Tokyo Haneda Airport terminal operator, Japan Air Terminal, rose 3% yesterday, as Japan Airlines announced plans to slash an unprecedented 31 domestic routes (or 20% of its domestic network) by the end of fiscal 2010, as part of its corporate rehabilitation programme.

Expansion is already occurring in short-haul markets. Both Korean Air and Asiana Airlines will operate weekend red-eye charter flights between Korea's Busan and Haneda. Korean Air will operate its twice weekly flights to Haneda using a B737-900 from 16-Apr-2010 until 25-Oct-2010. Asiana will use an A320 to operate the new service from 30-Apr-2010 to 25-Oct-2010, according to Korea Airports Corp's 2010 Summer Schedule. These flights will utilise Haneda's overnight slots and beats Busan's 11 pm - 6 am curfew time. Busan is likely to get two pairs of daytime slots at Haneda, which were allocated to Korea recently. 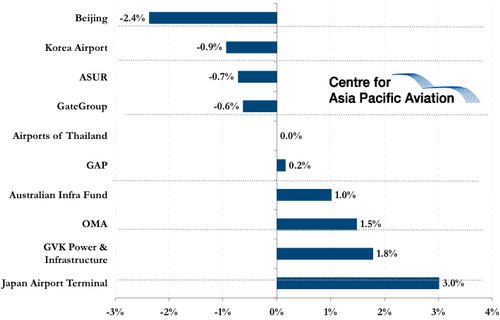