Muscat Int'l Airport: new facilities and all set to grow in the Gulf

The opening of Muscat International Airport’s new international terminal earlier this year, which effectively made it a new airport, throws it in competition with some of its peer airports, not only for hub traffic but as a catalyst to increasing tourism.

Although taking on the big hubs in the region is a huge challenge, the support of the national airline – which has now been bundled with the airport authority as the same organisation – will be crucial, both in doing that and in attracting more visitors to Oman, which has a more diverse tourist offering than the UAE and Qatar.

There is also the prospect of some form of privatisation on the horizon, possibly including an IPO, with foreign investors and perhaps operators also gaining a stake.

With the formal opening of its new terminal on 11-Nov-2018 (it received its first passengers on 20-Mar-2018) the renamed Muscat International Airport and Oman’s flag carrier Oman Air are poised to play a much greater role in Middle Eastern aviation than they have done previously. In a region that is dominated by the three big airlines – Emirates, Qatar Airways and Etihad Airlines – and by the airports at which they operate.

The previous terminal had not been fit for that purpose but the construction of the new one, side-by-side with it, had taken longer than expected.

It was originally intended to open in 2014 and the final works were the most prolonged. In Jan-2016 Oman’s Minister of Transport and Communications had reported that construction work was 86% complete and that it would be finalised by the end of 2016.

New terminal’s capacity is adequate until 2028, at present growth levels

The new terminal is designed to accommodate up to 56 million passengers per annum to meet "future demands". Reaching that level of demand will take some time.

The chart below shows that passenger numbers at the airport have been growing consistently since 2012 at an average rate of 13.3% per annum, including the first nine months of 2018. At that rate, if it is sustained, the new terminal will reach capacity in 2028. 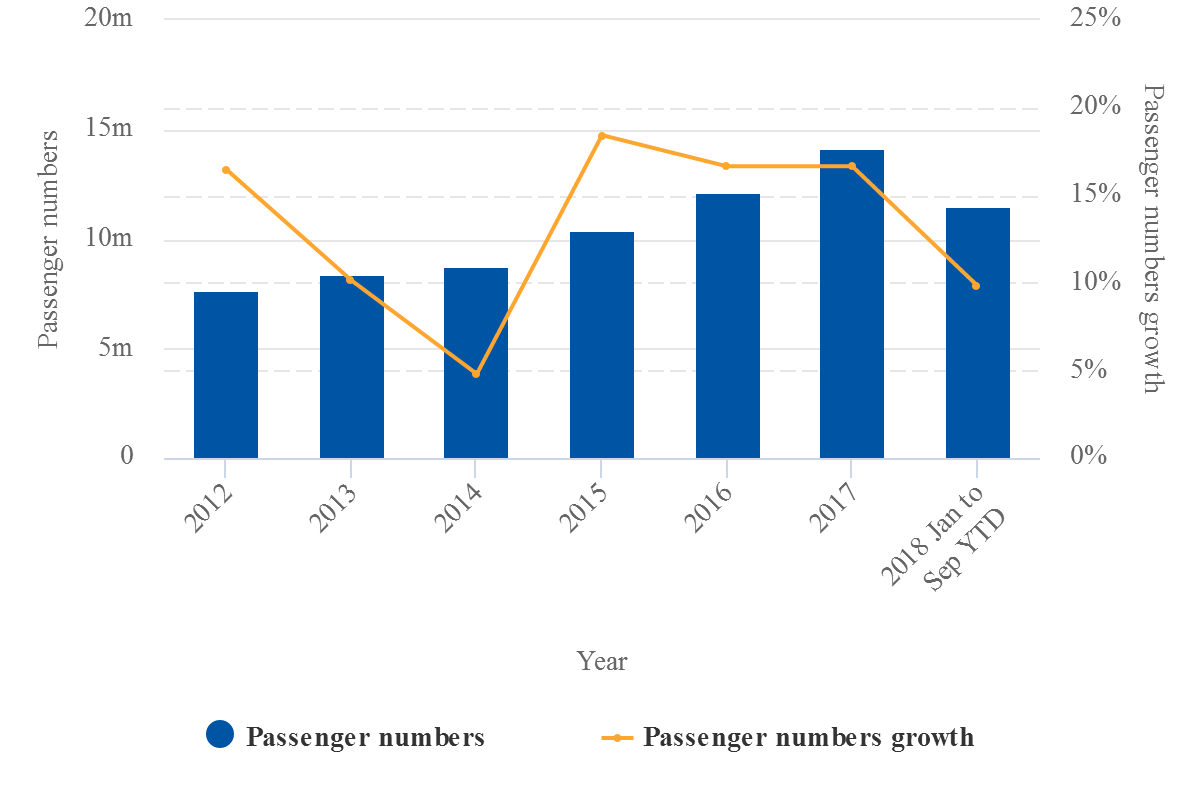 Source: CAPA - Centre for Aviation and National Center for Statistics and Information. Sultanate of Oman.

On the other hand, taking into account the delays to this terminal, it might be wise to start thinking about its extension, or another one, even now.

The table below compares the size and growth of the Muscat airport with the ‘Big Three’ Gulf airports, where the ‘Middle East Big Three’ (MEB3) airlines have their bases, and with Sharjah, Bahrain and Kuwait airports, measured by passenger numbers, growth and cargo volume/increase.

There is a wide span of airports contrasted here, but it is evident that overall the Muscat airport is faring better than most, in both the passenger and cargo segments.

As one might expect, Oman Air is the dominant airline, with over 70% of all movements and 61.7% of seat capacity. No other airline has as much as 6% of seats. 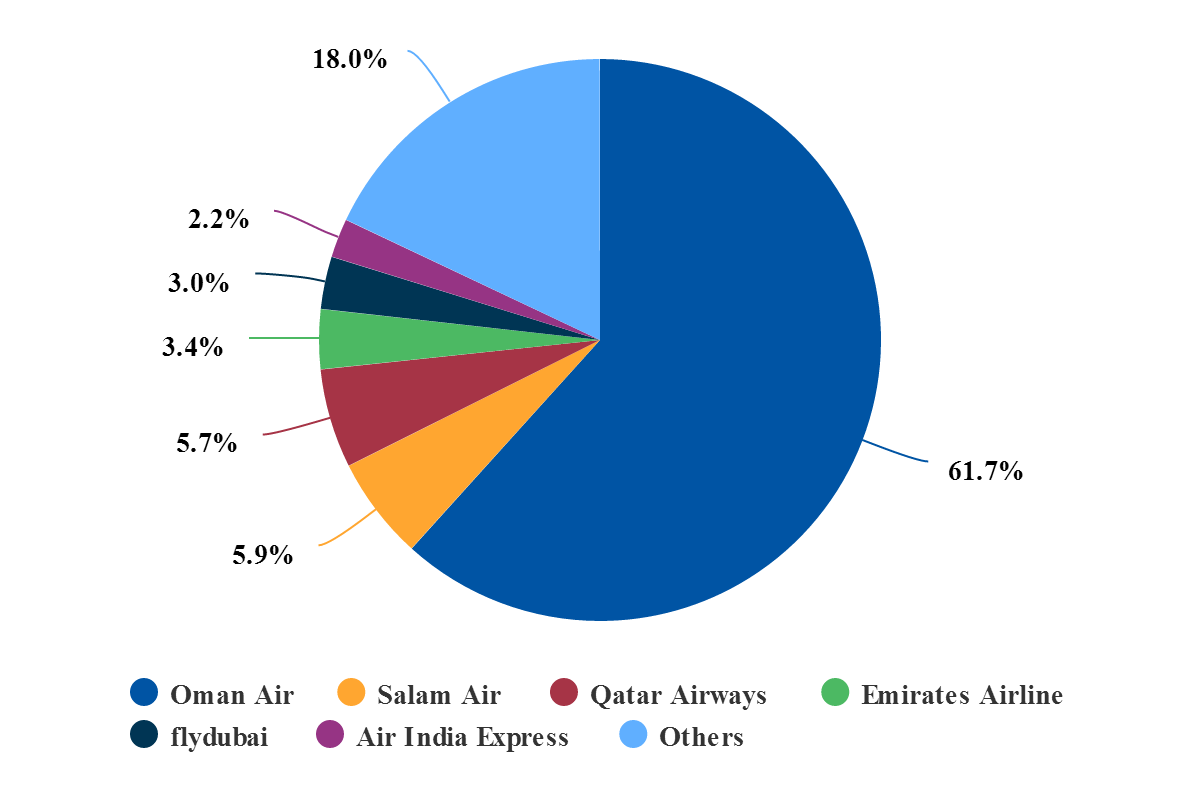 Oman Air is beginning flights to Russia, Morocco and China this year. Apart from boosting visitor numbers, those services will add to the airline’s and airport’s hub credentials.

Meanwhile, the country’s low cost airline Salam Air will move to the new terminal by the end of 2018 and is expected to boost growth at the hub. It hopes to replicate the success of budget airlines in Europe and Asia.

It is interesting to compare the ‘dominance factor’ of the flag carrier or otherwise home-based airline at each airport.

Apart from Kuwait and Bahrain, Muscat has the lowest ratio of dominance by a single airline.

For passenger connectivity that could be a bad thing, but for competition purposes it is usually a positive one, encouraging other airlines to introduce new services and/or to increase frequencies, possibly at the expense of ‘fortress hubs’.

There are few ‘low cost’ airports in the Middle East, a region that has its own comprehensive share of full service carriers, although Air Arabia's base of Sharjah is an example of one that does cater primarily to LCCs.

In Muscat’s case, the ratio of LCC capacity is 15.8% of seats right now. The table below details the peer airports’ low cost contribution.

There is no clear-cut answer as to what benefits Muscat’s fairly high low cost airline patronage has, if any.

In the event of growth in long haul low cost activity in the region, and especially in relation to Oman’s tourist appeal, which is different from that of the UAE, airlines could find it to be an appealing alternative destination, but Oman Air would not relish such competition.

Unaligned Oman Air might see benefits from joining an alliance

Another important factor in assessing Muscat International Airport’s strength in comparison to peer airports is the seat capacity that is allocated to alliance member airlines. Oman Air itself is unaligned, but does have codeshare agreements with 15 airlines.

Partly as a consequence, 88.4% of the airport’s seats are on unaligned airlines. 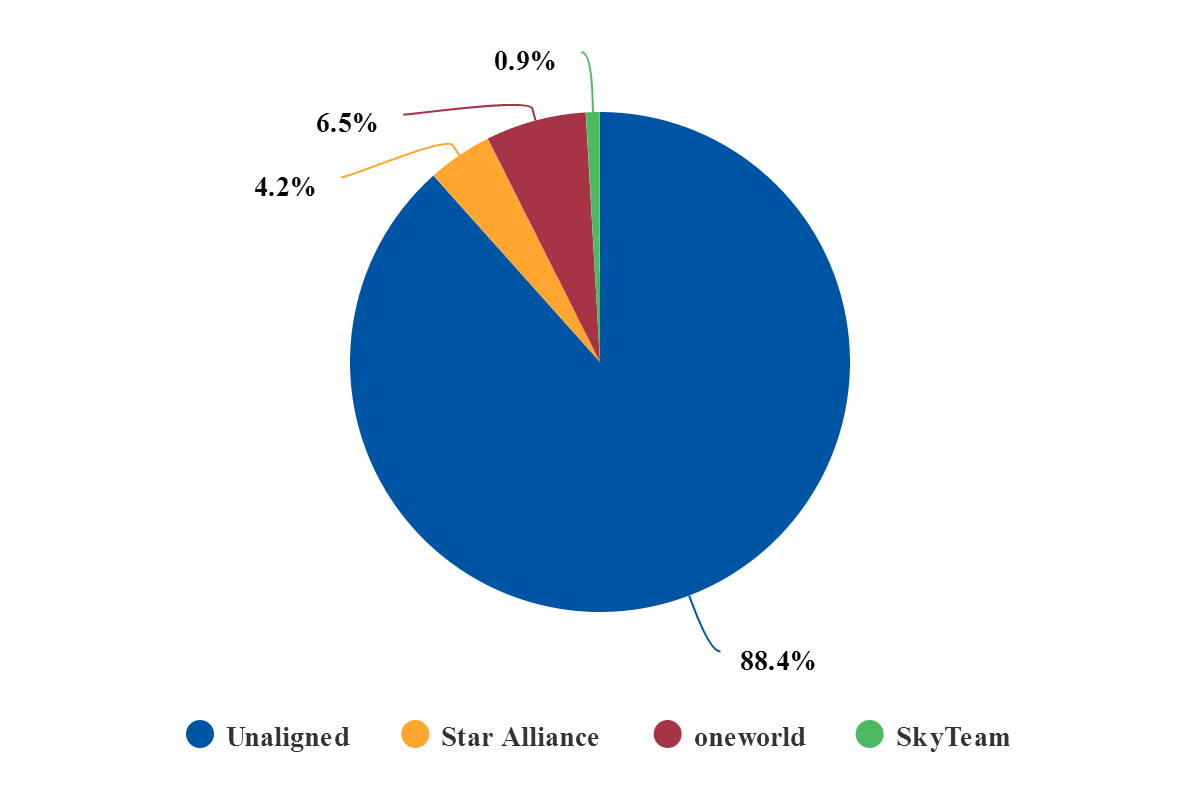 Again, a comparison with the peer group is made.

Muscat is slightly better placed than some of its rivals in this respect. The leading regional airport in this respect is Doha, which has 90.7% of its seats on aligned airlines and principally on oneworld airlines, which has the strongest position in the region, although it is not as strong as it is in other regions, by any measure.

Taking into account the fairly high level of unaligned seats at Muscat: although there is a oneworld presence there already, there is a suggestion that Oman Air might benefit from joining one of the other two alliances, but there are many other factors to take into account of course.

Muscat Airport’s route map shows a concentration of direct services on the Middle East, East Africa and the Indian Subcontinent, with selected services to Europe and Southeast Asia.

There are no direct services to the Americas, Australasia or West/South Africa. This sets the airport apart from the ‘Big 3’ airports, which have a broader network, and a more specialised one for marketing purposes. 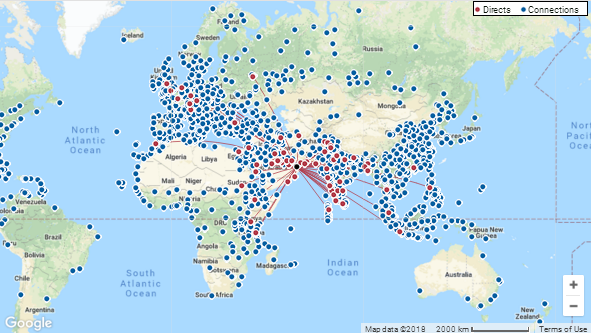 The next development is freight-related

With the opening of the terminal all passenger-related works have been concluded for the moment; nevertheless, as mentioned earlier, advance planning will be required for an extension, at least, if the current rate of passenger growth is sustained.

A cargo village is being planned, however, to increase the airport's airfreight and logistics revenue by OMR30 million (USD77.9 million) from 2020. The proposed site will house storage, warehousing, freight handling, forwarding, customs, inspection services, shipping, repackaging and distribution facilities, and will feature multi-modal transport infrastructure. It will have the capacity for 250,000 tonnes of cargo per annum.

The airport is operated by Oman Airports Management Company S.A.O.C (OAMC), now part of Oman Aviation Group, which also includes Oman Air, and owned by the Government of the Sultanate of Oman. OAMC is responsible for the management and operation of Muscat International and Salalah Airports and for the new airports of Duqm, Sohar and Ras Al Hadd.

There has been some talk in recent years both of attracting inward foreign investment to the airport and of the management company seeking foreign projects in which to invest.

This move seems to be wrapped up in a wider Gulf region drive towards privatisation and fiscal consolidation in the wake of lower oil prices (70% of the Omani government’s revenues come from oil), together with the local aim of boosting Oman visitor numbers from 3.3 million to 11.7 million and creating 0.5 million tourism-related jobs.

As the government does not have the cash reserves enjoyed by some of its neighbouring rivals, it is more heavily reliant on capital markets to shore up fiscal deficits.

Then, in May-2018, it emerged that the government was considering the sale of a partial stake in the airports management company by 2020, linked to an IPO.

But it will always be wary of foreign investment and management participation after a failed privatisation exercise in 2002 in which the management of Muscat and Salalah airports was handed over to a British Airport Authority-led consortium.

Huge tourism facility to be developed at Salalah

Other Omani airports have not had the same publicity but at Salalah, where passenger traffic was expected to be close to two million by the end of 2018 (though it has stalled in the first nine months), a mixed-use tourism facility valued at USD5 billion is planned.

Duqm Airport opened a new Terminal in Sep-2018 and may be developed as a logistics hub.