Mumbai terminal reopens as India ponders the spread of COVID-19

The degree of ‘recovery’ from the effect of the pandemic on aviation varies from country to country. Some are still a long way off resuming any sort of cohesive air service, whereas others are close to it.

India potentially lies in the latter category, and as Mumbai’s airport reopens its domestic terminal to provide more space for latent international operations at the other terminal, this report looks at the relatively low infection rate in India and at what the reasons might be.

It poses by consequence the question of whether India could benefit from a commercial advantage, at least for a short while, as air transport aspires to return to normality.

Mumbai Chhatrapati Shivaji Maharaj International Airport (MCSMIA) announced on 26-Feb-2021 that it was planning to reopen and resume operations at Terminal 1 on 10-Mar-2021, following the temporary closure of T1 since early 2020 due to the impact of coronavirus.

GoAir, Star Air India, AirAsia India and TruJet plan to transfer all their domestic services from terminal 2 to T1 from 10-Mar-2021, while IndiGo will transfer select domestic services to T1. The terminal, originally known as Santacruz Airport, is home mainly to domestic low cost services.

Of the seat capacity, 72% currently is ‘low cost’ and 87% is domestic, so it is clear to see why the airport management wants to reopen the dedicated terminal quickly and fully, to prepare the way for the resumption of international flights.

MCSMIA is the main gateway to the city of Mumbai and is the second busiest airport in India.

Now majority-owned by the Adani Group, it recently featured in the CAPA report indicated below.

Passenger traffic growth at MCSMIA has been decreasing since 2015, and even went into arrears by -6% in 2019 before the impact of the virus was felt. 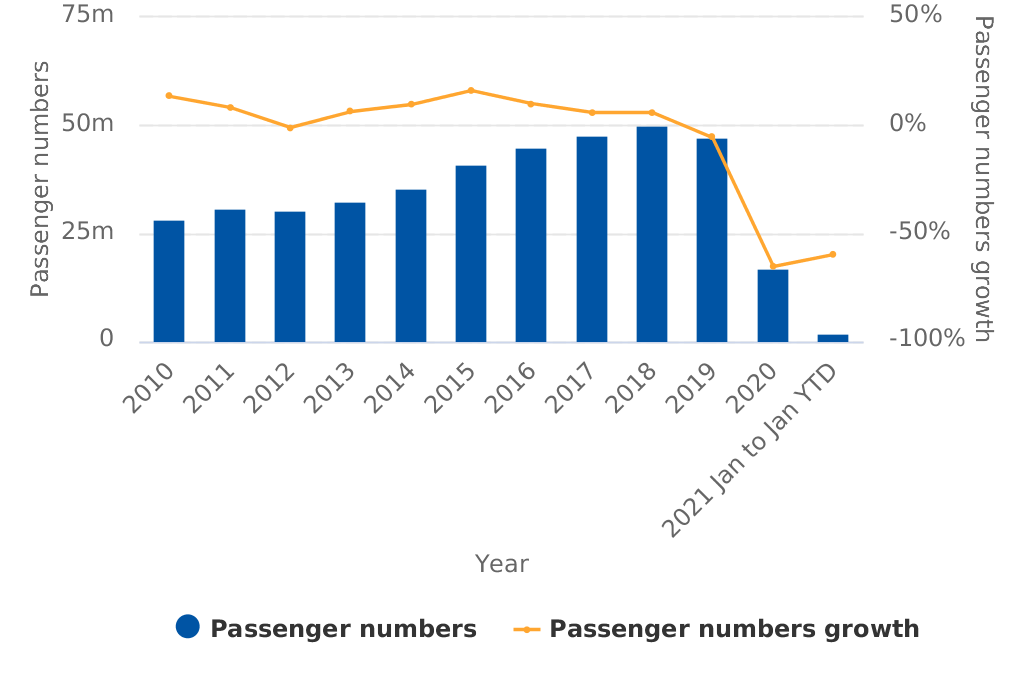 Utilisation by the hour remains high

Utilisation of MCSMIA is comprehensive at the moment, as shown by the chart below, which measures seat capacity by the hour on any given day. 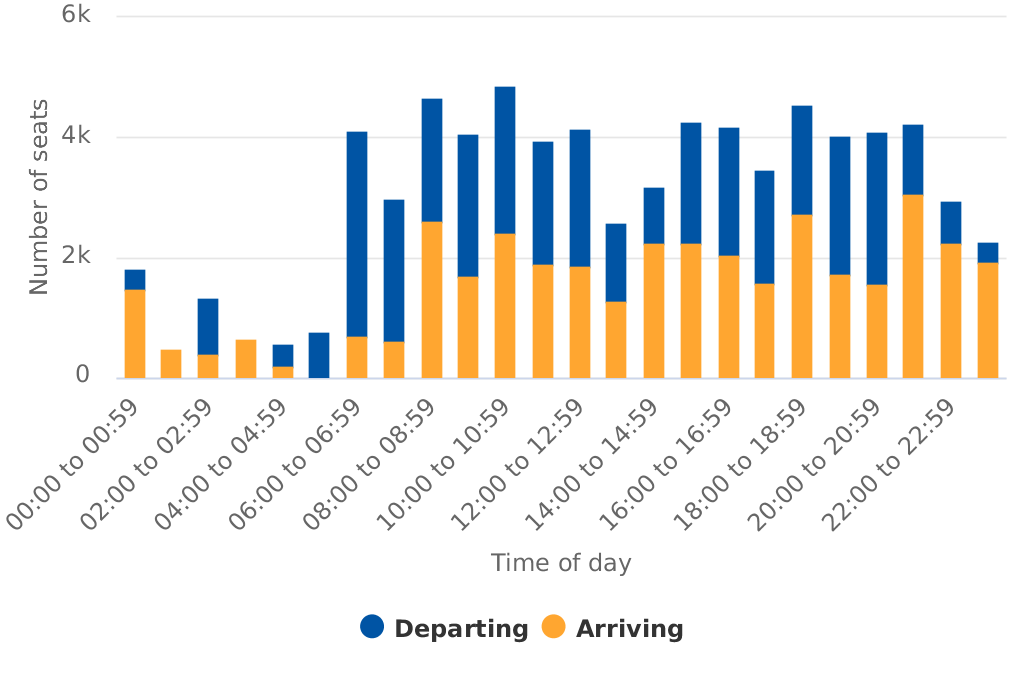 The third chart here is the impact of the pandemic on seat capacity overall.

It reveals that after a stop-start recovery in the period Apr-2021 through Jul-2021, the graph line has mainly been up and less staccato in nature, to the point where in the first week of Mar-2021 capacity is at 61% of its 2020 level in the same week.

It looks as if the two chart lines will cross at the beginning of Apr-2021, with this year’s line (green) still rising. 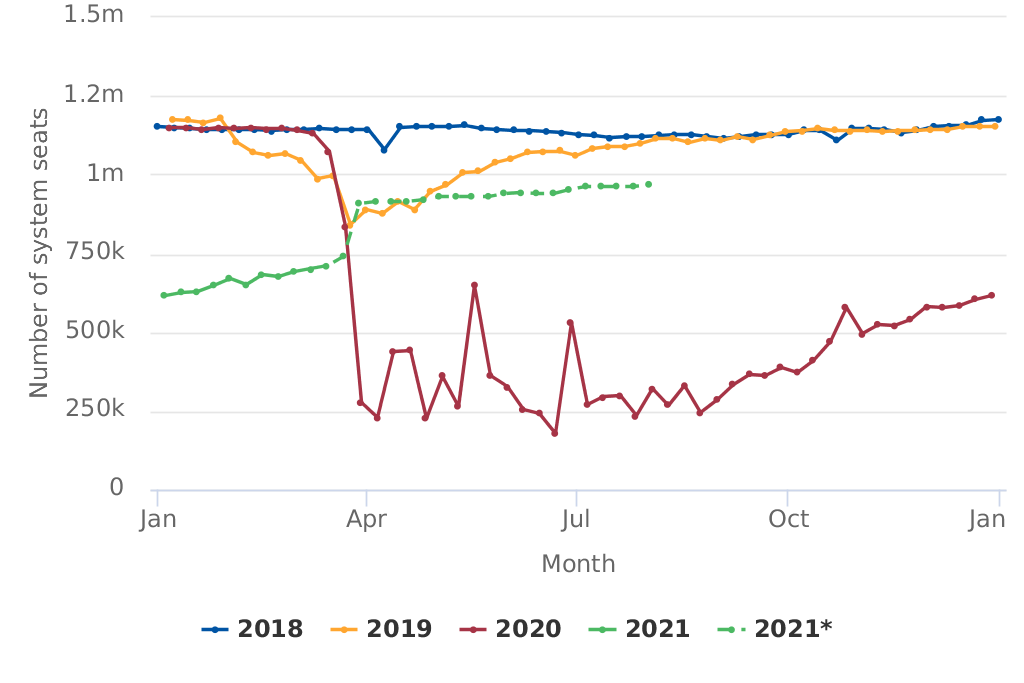 Virus cases not as high as expected – could that give India a competitive advantage?

This brings into question the wider bearing of the pandemic on India; a peculiar situation in which case numbers are not as high as they were expected to be, and for reasons that are not at all clear. Indeed, it is even being suggested that India could lead Asian aviation out of the pandemic.

According to data from CAPA/Humanitarian Data Exchange, total cases in India reached 11,112,241 on 28-Feb-2021, of which 1,063,491 are ‘recovered’ – an extraordinary number, even allowing for underreporting. 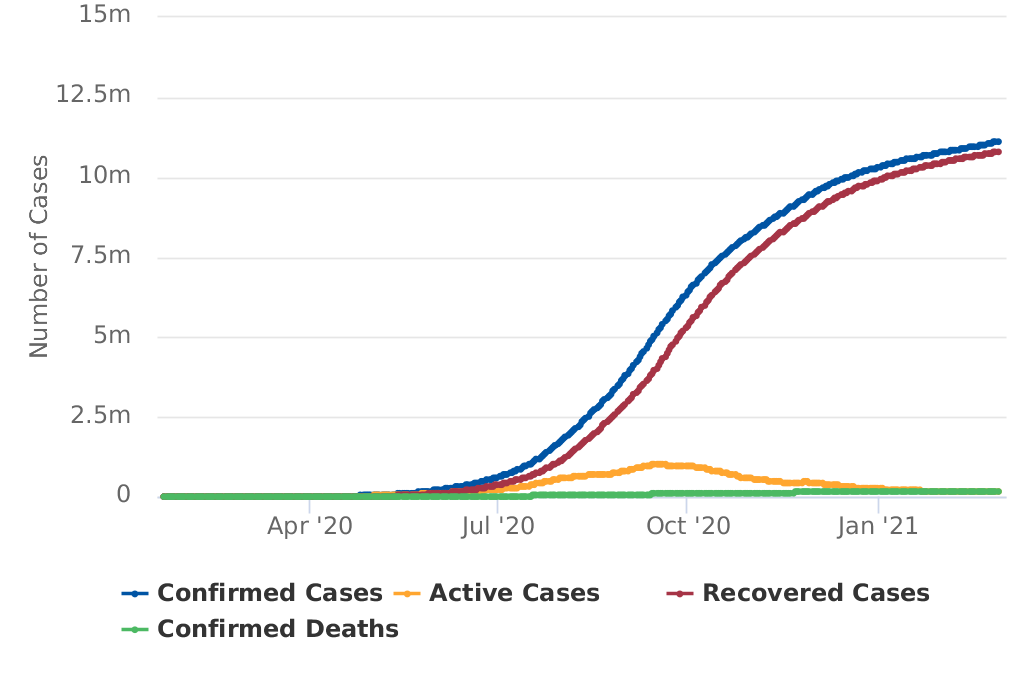 India's daily average case rate well below that of Brazil and the U.S….

As India's count of active cases has dropped to 168,358, the country continues to be second most affected globally, and ranks 13th among the worst hit nations by active cases.

…and stands at less than 1% of the population overall

However, when India's huge population is taken into account, it is clear that unwanted statistic is only a function of the nation's size.  The telling statistic is that of cases per capita, just 0.8%, which is very low.

Numerous theories have been put forward to explain what is happening. The vaccination programme is moving ahead quickly, with 1.48 million crore doses administered (approximately 15 million), but that is only less than 1.1% of the population, so the vaccine has had insufficient time and distribution to play a significant role in the statistic.

Many early models had predicted millions of deaths, but fatalities and caseloads began declining from mid Sep-2020, despite consistent testing and some short and fierce spikes of infections in cities like Delhi, and the situation has markedly improved since.

Now, with the average of daily cases having fallen below 10,000 (there has been a small spike in this past week or so) and the seven-day rolling average of daily deaths from the disease sliding to below 100, more than half of India's states have not  been reporting any COVID deaths at all. Delhi, once an infection hotspot, did not record a single COVID death on one day – for the first time in 10 months.

What’s more, the number of deaths per million people has been in the region of 110-115, much lower than what has been reported in Europe or North America. It is also clear that the decline in cases is not because of lower testing.

There is no shortage of possible reasons for the relatively low severity of the disease and its toll.

Some of those put forward include a state of ‘herd immunity’ (when a large portion of a community becomes immune to a disease through vaccination or through the mass spread of the disease), but many experts believe that point is far from being reached.

The latest survey: studies that pick up antibodies suggest 21% of adults and 25% of children have been already infected with the virus. They also found that 31% of people living in slums, 26% of non-slum urban populations, and 19% living in rural areas have been exposed to the virus.

That is well below 50% – a figure reported by some of the bigger cities such as Pune and Delhi. There is evidence of much higher levels of exposure to the virus in those locations, hinting that these places are likely closer to herd immunity. But the numbers are still too low overall.

The President of the Public Health Foundation of India said he believes there is no region in the country which can be deemed to have attained herd immunity, although small pockets may exist. So people who have still not been exposed to the virus in places with a high prevalence of infection may remain protected in their communities, but would become vulnerable if they travelled to areas where transmission levels are lower.

There could be several different reasons why cases are dropping.

A patchwork pandemic with limited impact in India’s vast countryside

Firstly, India has experienced a ‘patchwork’ pandemic, with cases waxing and waning at different times in different parts of the country. More people have been infected in cities, especially in overpopulated slums, and in developed, urbanised districts, than in smaller towns or villages. In all of these places, their exposure to the virus has varied significantly. Cases have now slowed down in most urban areas, but rural India still remains a bit of a mystery.

In some cities like Delhi, Mumbai, Pune, and Bangalore, up to 60% of people have been found with antibodies to the virus, so it is all disturbingly uneven.

Another explanation is that India has missed, and continues to miss, lots of cases, mainly because a large number of infected people have no symptoms at all or have a very mild infection.

On the other hand, if there are a very high number of asymptomatic or very mild cases, that adds weight to the argument that a threshold of herd immunity may have been reached already. But that does not explain why so many Indian cases have been mild.

Equally, there is a possibility the death rate may have been under-reported. India has a poor record of certifying deaths, and a large number of people die at home rather than in hospitals, where data recording takes place.

Then again, such under-reporting, if that is the case, has not caused public panic or overwhelmed hospitals. India has some 600,000 villages. Even one undiagnosed and unreported death from COVID-19 in each village every day would not overwhelm the public health system.

The sweeping, all-embracing shutdown imposed from late Mar-2020 and lasting 70 days to halt the spread of the virus may have played a role in preventing infections.

Transmission slowed in the badly hit cities because of the expanded use of face masks and the enforcing of physical distancing, as well as school and office closures and people working from home.

On the other hand, many other countries, including most of them in Western Europe, did similar things but without a similarly beneficial outcome. When those countries relaxed the impositions, the virus just came straight back, which it has not done in India, perhaps because of better mask and distancing discipline.

In other words, the reasons remain unclear.

The arrival of new variants could upset the apple cart again

One potential problem that India faces is the arrival of any of the known variants (UK, Brazilian, and South African).

The UK variant, detected in Sep-2020 and the cause of the second wave there, has since been found in more than 50 countries, and is now set to become the world's dominant strain.

It is the variants – and there might well be more of them to come – which could upset all India’s calculations. The country has many scientific laboratories but they need to scale up genome sequencing activities urgently, to nip the variants in the bud, if and when those variants arrive.

Any such arrival could be at the Mumbai airport when international services restart. In conjunction with the ownership change the resumption of services could do much to enhance Mumbai’s standing in international aviation terms, and also that of the Navi Mumbai airport, which is yet to be built. It could help rejuvenate India’s standing in the aviation world generally.

At least – as long as the new virus strains are kept at bay.

In the interim the authorities are on their toes. Below is the algorithm for the Standard Operating Procedures flow chart for international passengers arriving in India. If anyone wonders what the ‘new normal’ will look like when other countries open up, they could do worse than to study it closely.

This SOP throws down a challenge to airlines, airports, tour companies, tourist authorities, DMCs, hotel operators – in fact, everyone involved in the business – to step up to the plate to ensure they do all they can for international tourists arriving in India.

Nobody could blame any potential passenger for opting to stay at home and conduct that business meeting on Zoom, or play a round of golf or two, rather than go through the extreme demands just to get into India to lie on a beach in Kerala.

Breaking News, 15-Mar-2021 - AAI to sell its stakes in Mumbai, Delhi and other major airports?