After climbing close to EUR3 per share over the past few days, MTU Aero Engines slipped back 5.6% on Tuesday, ending the day at EUR31.85. The stock jumped late last week and swung up by 7% on Monday, following an announcement by China Southern Airlines that parent company, China Southern Air Holding, would purchase its stake in MTU’s Chinese MRO JV, MTU Maintenance Zhuhai, for USD235.8 million.

MTU’s shares were downgraded from "neutral” to "overweight" by HSBC on Monday, largely on valuation grounds, but also citing concerns about the effect of the value of the Euro on business. HSBC raised its target price for the stock from EUR31 to EUR36 per share.

Rolls-Royce shares were up 1.5% on Tuesday, as the company continues to garner small military contracts. Rolls-Royce hit a 22-month high in mid-Sep-2009 of 498.3 pence per share, but has slipped over the past two weeks.

Meanwhile, Boeing’s shares hit an 11-month high of USD54.62 per share on Tuesday, up 2.9%. The stock has climbed steadily over the past two months. The reopening of the US Air Force aerial tanker competition, as well as the impending test flights of the B787 and B747-8, both due during 4Q2009, are expected to see the company finish the year on a high. 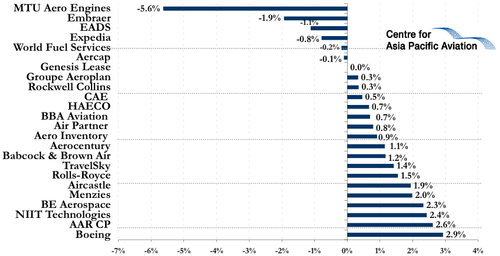