Each of the US companies will be partnered by a Chinese counterpart for the programme. Rockwell Collins and China Electronics Technology Avionics Co Ltd (CETCA) signed a memorandum of agreement to establish a China-based JV, which is expected to sign the formal supply agreement with COMAC by the end of this year. Honeywell is collaborating with Hunan Boyun New Materials Co Ltd and Changsha Xinhang Wheel and Brake Co Ltd, and is expected to sign a JV with the Chinese suppliers to provide the wheels and brake system for the C919. GE Aviation Systems has partnered with AVIC Systems and will also form a JV.

Apart form Rockwell Collins, Honeywell and GE Aviation, other US companies are also deeply involved in the C919 project. Alcoa is developing new aluminium alloys and composites for use on the aircraft, while Parker Hannifin will provide fuel and hydraulic systems. Hamilton Sundstrand a branch of the giant United Technologies Corporation (UTC), has been contracted for electrical systems work. In 2009, Eaton Corporation signed a USD1.8 billion JV agreement with Comac for support for the C919 project.

The C919 is, like the AR-21 regional jet before it, as much a capabilities and competencies building exercise as it is an attempt to compete directly with Airbus and Boeing. More than 80% of the aircraft’s systems will be designed and manufactured outside of China, but local participation will increase. The goal for COMAC is to reduce foreign participation to around 50%, including a switch over to an indigenously manufactured engine.

COMAC has expressly stated that its goal is to become a third way in aerospace manufacturing, breaking the large aircraft monopoly that Airbus and Boeing have enjoyed for the past two decades. The C919 represents another step in that goal, albeit t significant one.

US companies such as GE are using the project as part of their strategic efforts to become more involved in the industrial development of China. COMAC plans to manufacture 2,300 C919s after the first aircraft commences testing in 2014, even though the programme has yet to report a single firm order.

OEMs have a good day

In trading yesterday, GKN Aerospace gained 2.5%, while BE Aerospace was up 1.6%. Honeywell was up 1.3%, while Rockwell Collins dropped 0.3%.

Zodiac Aerospace surged 7.1%, following its announcement that it had rejected an approach from Safran regarding possible industrial cooperation and potentially a merger via an asset swap. 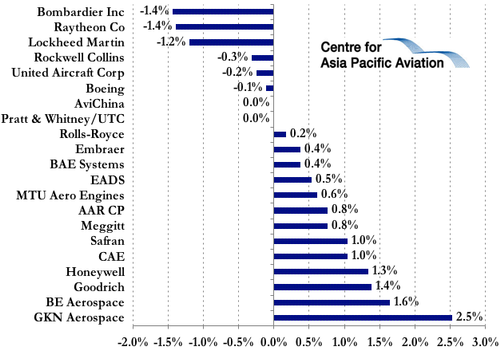 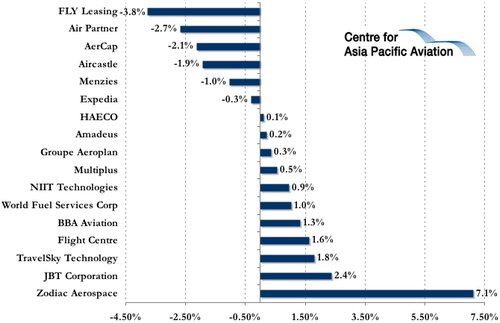