The ratings agency expects average passenger numbers to grow by 4% in the coming 12 months on a year-on-year basis, despite  weaker leisure markets which are expected to reduce recent double-digit expansion at Melbourne, Sydney, Perth and Adelaide to single-digit growth. It added that improved price offerings and increased business activities should spur growth.

Moody's warned however, that capital expenditure programmes and corresponding debt would negatively affect financial metrics should expectations on passenger growth fail to materialise. Moody's rated four of Australia's five major airports as stable, with only Brisbane having a negative rating of "Baa1". Other ratings included "A3" for Melbourne, "Baa2" at Adelaide and Sydney, and "Baa3" for Perth.

Pax at Bangkok Airport falls 30% in May-2010, Government promises support for recovery

Tourism Authority of Thailand stated the Thai Government has given its full support to the recovery of the Thai travel and tourism industry in recognition of its importance to the national economy and acknowledged it was the worst affected of all business sectors by the political unrest.

The full report on the Tourism Authority of Thailand’s traffic is contained in today’s edition of Airport Business Daily. For the latest strategic news updates on listed and non-listed airports worldwide, including traffic, financial highlights and shareholding, subscribe today. 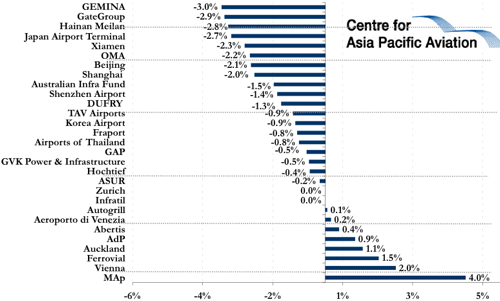