The privately owned Monarch Group no longer publishes a glossy annual report for all to see, a practice that has been discontinued since its 2014 acquisition by turnaround specialists Greybull Capital. Such reticence is sometimes a sign of having something to hide. Not so here; the group's statutory accounts for the year ended Oct-2015 were recently filed with the UK's Companies House. They show a strong return to profit for the Monarch Group, whose largest business is Monarch Airlines.

In the previous year, FY2014, the airline had grown too rapidly and plunged into a heavy loss, while the Monarch Group had almost run out of cash. A subsequent restructuring programme, devised by the management and backed by the new shareholders, sought to restore profitability. The FY2015 accounts demonstrate the success of the restructuring, which involved capacity cuts (mainly in the summer), fleet reduction, withdrawal from charter and long haul flying, a shrinking of the workforce and new labour contracts. With profits restored, Monarch is now growing once more.

This first part of CAPA's analysis of Monarch's restructuring examines the changes to its capacity, schedule network and fleet. Part 2 will consider its improved financial results and future prospects.

In Oct-2014 the founding shareholders of the Monarch Group, the Mantegazza family, ceased their 46-year association with the company. The Mantegazzas sold a 90% stake to Greybull Capital and the remaining 10% to the Pension Protection Fund.

At the same time Monarch announced the main points of the restructuring programme to be implemented. These included:

See related report: The Monarch Group. Part 1: No divine right to rule the air, but a new reign has started purposefully

According to figures in Monarch Airlines' annual report it cut its seat capacity by 17.6% in FY2015, while its total passenger numbers fell by 17.1% to 6.0 million (the level envisaged at the outset of its restructuring programme). Based on its number for passengers and seats, its load factor gained 0.4pts to 83.0% in FY2015.

For a longer-term perspective on the development of Monarch's traffic and load factor trends the calendar year data from the CAA are quite informative (rather than Monarch's October year end data). According to this source Monarch's passenger numbers fell by 18.6% to 5.7 million in calendar 2015, broadly returned to their 2006 level. Its load factor, derived from RPKs and ASKs, gained 1.2ppts to 82.3% in FY2015.

Scheduled passengers were 96% of total in FY2016

Scheduled passengers accounted for 96% of the total – twice the 48% share of Monarch's traffic that they held 10 years earlier. This reflects the airline's strategic decision to exit the charter business entirely from May-2015 as part of its restructuring.

According to CAA data, Monarch's FY2015 monthly capacity broadly tracked its prior year levels from the start of the financial year in Nov-2014 until Mar-2015. The heavy capacity cuts required under the restructuring programme then started from Apr-2015.

OAG data indicate that Monarch's summer 2015 year-on-year seat capacity reductions were particularly strong in Turkey, but it also made cuts in almost all of its destination countries, including Spain, Cyprus, Egypt, Gibraltar, Greece, Croatia and France.

Geopolitical and economic events negatively affected demand in Greece, Turkey and Cyprus. Monarch's 2015 annual report says that the Canary Islands and the Western Mediterranean were the best performing routes in FY2015. In spite of cutting capacity overall, Monarch increased its seat numbers in Italy in summer 2015.

The cumulative ASK reduction across the summer season months of Apr-2015 to Oct-2015 was 28%. The significant cut in seat numbers to further destinations, such as in Turkey, amplified the capacity cut in ASK terms. The ASK reduction in the winter months Nov-2015 to Mar-2016 was at the slightly lesser rate of 22%.

By focusing its capacity reduction more on the summer than on the winter schedule Monarch has reduced the degree of seasonality in its business. Typically its lowest traffic month is February, while its peak month is August. Its Feb-2014 seat numbers were just 35% of its Aug-2013 capacity and this was one of the lowest levels among Europe's short/medium haul LCCs (indicating one of the highest levels of seasonality).

Two years on Monarch's Feb/Aug seat ratio has risen to 43%, reflecting a reduced level of seasonality (the leap year made Feb-2016 a day longer, but this does not significantly change the ratio). Monarch's ratio now indicates lower seasonality than both Transavia (40%) and Vueling (42%).

Nevertheless, Europe's two leading LCCs – Ryanair and easyJet – have ratios of 73%, demonstrating their greater success in reducing seasonality. Ryanair in particular has made a significant change (its ratio was 58% two years ago) and has achieved this by growing its winter business more rapidly than its summer business.

Capacity cuts pushed load factor up in summer 2015, but it fell again from Dec-2015

The heavy capacity cuts last summer also helped to boost Monarch's load factor. Although gains only started from May-2015, Monarch's load factor across the summer months of 2015 was 1.6ppts ahead of the same period a year earlier, according to CAPA calculations based on monthly traffic data reported to the CAA.

However, although load factor continued to increase in Nov-2015 (the first month of FY2016) it then started to reverse, according to CAA data.

Monarch's fleet currently (at 5-Jul-2016) consists of 34 A320 family aircraft, with an average age of 11.5 years. Under its restructuring programme this total has reduced from 42 in the summer of 2014. Its ageing widebody aircraft have disappeared from the fleet (it previously operated A300s and A330s), including its Boeing 757s. The table below summarises the evolution of Monarch's fleet since summer 2013.

After the sale of Monarch to Greybull Capital in Oct-2014 the airline confirmed an order for 30 Boeing 737MAX-8s. According to the CAPA Fleet Database, these will be delivered at the rate of 10 per year in 2018-2020 as replacements for the A320 fleet.

The aggregated seat capacity of the 30 737MAX-8s is a little less than that of its current 27 A321s and only approximately three quarters that of its total existing fleet. Although it may lease additional capacity when needed, and the phasing out of the Airbus aircraft can be managed to adjust capacity, this suggests that Monarch currently has no plans to increase its overall capacity in any significant way from its current level.

The combination of a more disciplined approach to capacity and the more fuel-efficient 737MAX aircraft should be beneficial to Monarch's profitability.

Aircraft utilisation has continued to fall

Possibly as a consequence of a lower level of activity Monarch Airlines improved its on-time performance in FY2015, with a 7ppt gain to 82% in the proportion of flights departing within 15 minutes. This is an important factor in attracting and retaining passenger loyalty, particularly among business passengers (although Monarch has a strong leisure focus).

One area that has not improved under the restructuring is the average daily utilisation of the fleet, although increasing this was also a target of Monarch's programme. However, according to data from the Civil Aviation authority, based on calendar years (rather than Monarch's Oct year end) it has so far failed to achieve this target.

Average daily utilisation fell from 9.1 hours in 2014 to 8.1 hours in 2015. This indicator has been declining every year since 2009, when it stood at 10.0 hours, according to the CAA (it was 10.4 hours in 2006). The reduction in 2015 may have been due to increased levels of disruption, including the suspension of routes to Tunisia, in addition to the final changes under the restructuring programme. It may also be the result of shorter sectors and the lack of demand for multiple daily frequencies in Monarch's network.

Nevertheless, the fall in utilisation sounds a note of caution amid the more positive results of Monarch's restructuring.

Monarch's schedule is strongly short/medium haul focused and this has intensified under it restructuring programme, so that 99% of its seats are in Europe in summer 2016 compared with 93% two years ago (based on OAG data for Sep-2016 and Sep-2014).

Flights of under four hours account for 79% of Monarch's seats, compared with 72% in summer 2014. The withdrawal of its widebody aircraft is consistent with its network profile.

Security concerns caused Monarch to suspend its flights to the Egyptian destinations Sharm el-Sheikh and Hurghada throughout the summer 2016 schedule. Current OAG data indicate that it will resume Sharm el-Sheikh services at the start of the winter 2016/2017 schedule – at the end of Oct-2016. 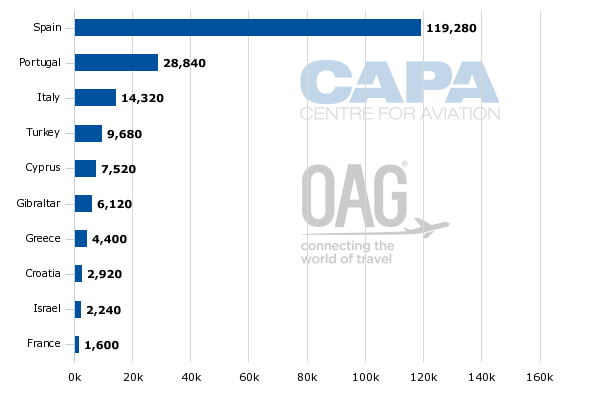 According to data from OAG Monarch's seat capacity is increasing seat numbers again in 2016, with a mid-single-digit rate of growth overall. In addition to launching its Israel flights, this summer it has put more capacity in Spain (but not back to its pre-restructuring summer 2014 level), Portugal, Gibraltar and Croatia.

Growth in these countries is partially offset by capacity cuts elsewhere. OAG data indicate that in addition to suspending its capacity to Egypt Monarch has reduced capacity to Turkey, Italy and France this summer.

In four of the countries served by Monarch in summer 2016 (Turkey, Greece, Croatia and Israel) it operates summer-only service. According to current indications from OAG data its winter 2016/2017 schedule will involve seven countries: Spain, Portugal, Italy, Gibraltar, Egypt, Israel and Cyprus.

Restructuring has been a success, but not undiluted

The restructuring programme involved significant capacity reductions for Monarch Airlines in FY2015. It also involved a shrinking and focusing of the fleet and network. The restructuring helped to stabilise the load factor decline of the previous two years, reduce the seasonality in the business, and improve its on-time performance.

However, load factor appeared to slide again in the first part of FY2016 and Monarch has not halted the multi-year fall in average daily aircraft utilisation.

Part 2 of CAPA's analysis will examine how the restructuring programme has improved Monarch's financial performance and will assess its prospects for the future.