Shares in Lonrho, owner of Fly540, fell 5.6% in trading yesterday. The company reported a GBP2.6 million profit in 4Q2010 (three months to 30-Sep-2010)and strong results in its transport division.

Fly540’s Angola unit is now is ready to commence commercial operations, after a drawn out approval process. Fly540 Uganda signed an agreement with Chapman Freeborn during 4Q2010, to expand the capabilites of the carrier.

The Fly540 group has signed operating lease agreements for two additional CRJ regional jets, which will be added to the fleet in Kenya and Tanzania.The additional capacity that these aircraft add will allow the group to increase passenger numbers and enhance profitability in 2011.

Other African and Middle East airline shares lost ground, with 1time Holdings down 2.2% and Air Arabia slipping 2.1%. Kenya Airways and Royal Jordanian were also down. 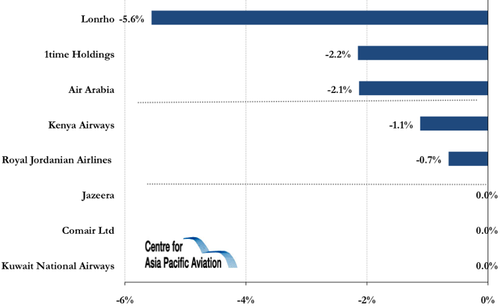