Meridiana: losses narrowed in 2013, but cost reductions remain crucial for Italy's other airline

Etihad's planned investment in Alitalia has attracted most of the aviation headlines in Italy recently. But what of Italy's number two indigenous airline, Sardinia-based Meridiana?

Together with its subsidiary Air Italy, Meridiana has a market share of 4% ranked by the number of scheduled seats to/from Italy in the week of 21-Jul-2014. The 2013 annual report of its parent group reveals that it narrowed its losses last year, by lowering cost per passenger more quickly than the fall in revenue per passenger.

Nevertheless, with strong LCC competition continuing to grow, revenue per passenger is likely to remain under pressure and Meridiana will need to find further cost efficiencies if it is to return to profitability. Recent industrial action over plans to outsource part of its operations to other airlines and over its redundancy programme highlight the scale of the challenge in achieving this.

Meridiana narrowed losses in 2013, but losses nevertheless, as revenues fall 23%

The airline's parent company, Meridiana S.p.A., owns 100% of the airline holding company Meridiana fly. The latter is the umbrella company for two airline brands, Meridiana and Air Italy, and also has a tour operator and maintenance division.

Most of the financial results and analysis in this report focus on data provided by Meridiana S.p.A on the Meridiana fly sub-group. 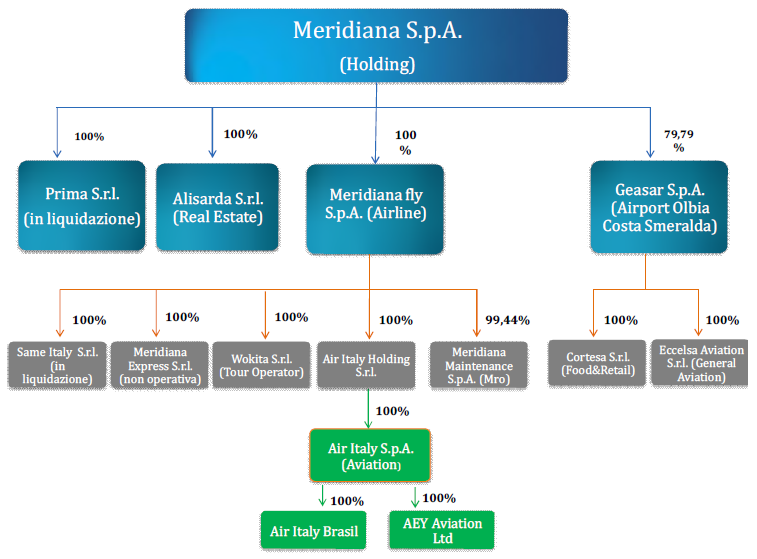 The air transport group consisting of Meridiana fly and Air Italy is the biggest unit of the Meridiana Group, whose net loss narrowed from a proforma EUR161 million in 2012 to EUR6 million in 2013, with 2013 revenues of EUR546 million (22% less than in 2012).

The Meridiana fly Group underwent a recapitalisation of around EUR200 million in Apr-2013 and its shares were withdrawn from the Milan Stock Exchange after parent Meridiana S.p.A (itself controlled by the Aga Khan) took full control.

Following the recapitalisation, Meridiana fly recorded a reduced net debt to EUR20 million at the end of 2013, from EUR89 million at the end of 2012. Its book equity remained negative to the tune of EUR34 million, although this was an improvement of EUR98 million over the course of the year. Although losses were reducing, this balance sheet situation suggests that further recapitalisations may still be necessary.

The consolidated traffic figures for Meridiana fly and Air Italy are shown in the table below. The total number of flight hours fell by 23%, with long-haul flight hours experiencing the most significant cuts (-38%).

Data from OAG and Innovata show that, over the past year Meridiana's network has reduced its dependency on the domestic Italian market, although this continues to account for the large majority of its seats. Its domestic seat capacity was 86% of its total capacity in Jul-2013, but this had fallen to 76% in Jul-2014. The recent growth of major European LCCs in the domestic market appears to have taken its toll.

Capacity-related costs (other operating costs and wet leases, maintenance, depreciation/amortisation and operating leases) fell by 36%, reflecting the reduction in the group fleet by 10 aircraft over the course of the year (of which nine were operating leases).

With Meridiana's weak balance sheet, operating leases are likely to continue to be the main form of aircraft financing. In addition, they provide some flexibility over capacity when leases expire. However, Meridiana's ageing fleet is a growing competitive disadvantage compared with the much younger fleets of much of its LCC competition on medium-haul routes. Even FSC competitor Alitalia has a much younger fleet (average age less than 10 years).

Market share is slipping as LCCs continue to grow in Italy

The Meridiana Group (Meridiana and Air Italy) is ranked number seven in Italy by seat capacity, with a seat share of 4% (week of 21-Jul-2014, source: OAG). Its rank has slipped from six and its share has lost 1 ppt compared with a year ago.

In the domestic market, it has a higher ranking and market share (3% and 13% respectively), but it has lost 4 ppts of market share compared with Jul-2013.

The growth of LCCs, particularly in the domestic market, has been the main cause of Meridiana's falling share of seat capacity in 2014. In particular, Vueling (part of IAG), Ryanair and Germanwings (part of Lufthansa Group) have grown strongly this year. 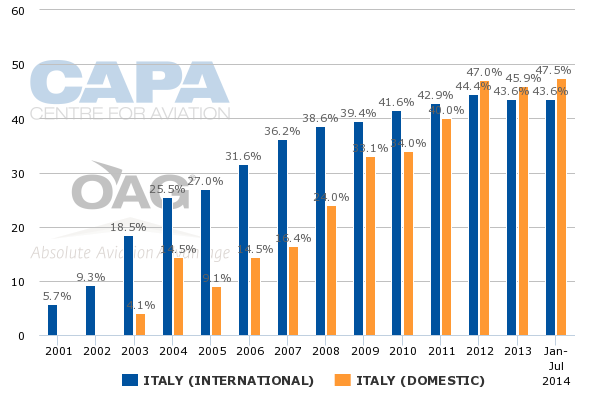 *Year to date
Source: CAPA - Centre for Aviation with data provided by OAG

The Meridiana Group annual report does not give ASK data for Meridian fly and Air Italy and so we cannot calculate CASK data. Nevertheless, we can calculate that the Meridiana air transport group lowered its operating cost per passenger by 23% in 2013, compared with a 15% reduction in total revenue per passenger.

This explains the narrowing of its losses, although the fact that it is still loss making highlights the need for further cost reduction and/or a reversal of the trend towards lower revenue per passenger.

Its revenue per passenger remains above LCC levels, and LCC competition in its markets is likely to mean that there will continue to be downward pressure on pricing. In addition, Meridiana's ageing fleet and sub-scale international network put it at a competitive disadvantage to Alitalia, especially outside its core markets in Sardinia and Sicily.

If Etihad completes its planned investment in Alitalia, this will leave Meridiana squeezed between the LCCs and a strengthened leading Italian competitor.

In this context, further cuts in cost per passenger will be critical to the Meridiana fly Group if it is to return to profit.