Meridiana: how to escape the impact of loss-making Italian airlines?

Even after some years of joining together to fight the foreign invasion by LCCs, this has not been a great year for Italy’s loss-making established airlines. The Alitalia Group, formed from the merger of Alitalia and Air One, has had to seek additional crisis loan funds from its shareholders and the Meridiana airline group, formed from the old Meridiana, Eurofly and Air Italy, has undergone a recapitalisation.

CAPA recently analysed Alitalia’s new 2013-2016 industrial plan and, in this report, we turn our attention to Italy’s second indigenous carrier. Meridiana is even more heavily loss-making than Alitalia. Its fleet is ageing, its international network is sub-scale and its dependence on the domestic market is likely to bring it into ever more competition with Europe’s leading LCCs, while its unit costs mean it is likely to continue to struggle to compete with them.

The sixth ranked airline in Italy; third in the domestic market

Meridiana Fly was formed from the merger of charter operator Eurofly with scheduled operator Meridiana in 2010. The group acquired Air Italy in Oct-2011 and, following its integration, it has reverted to the name Meridiana.

Meridiana is the sixth largest airline group in Italy by total number of seats, with a share of 5% (week of 22-Jul-2013, source: Innovata). This puts it a considerable distance behind the leaders Ryanair (22%), the Alitalia Group (20%) and easyJet (11%), but in the same ball park as Europe’s big three legacy flag carrier groups Lufthansa, IAG and Air France-KLM.

Perhaps the most significant difference between Meridiana and the other leading players in the Italian market is the extent to which its network capacity is dominated by the domestic market. 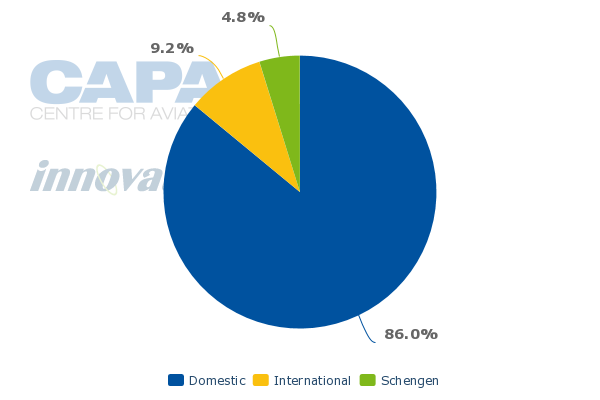 Regarding its international seat capacity, this is mainly short/medium-haul, with Eastern/Central Europe taking the biggest slice, followed by Western Europe. According to Innovata, although Eastern/Central Europe accounts for the biggest slice of Meridiana’s international capacity, the group is only ranked at 12th place by number of seats between Italy and this region. 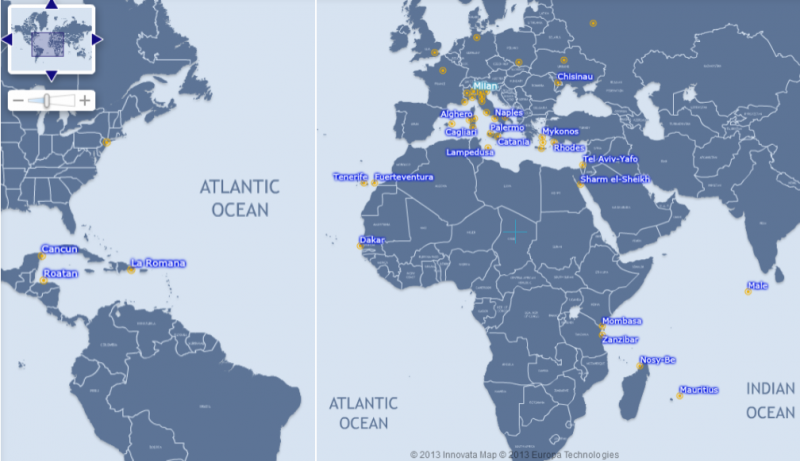 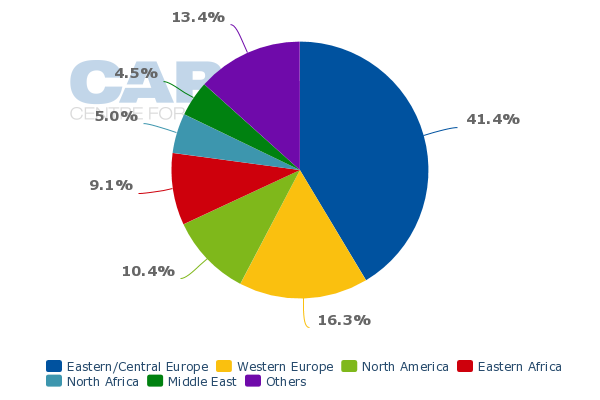 The most important countries served by Meridiana, ranked by seat capacity, are Greece, Moldova, the USA and Spain. Kenya, Egypt, Tanzania and Senegal also feature in its top 10 countries served. 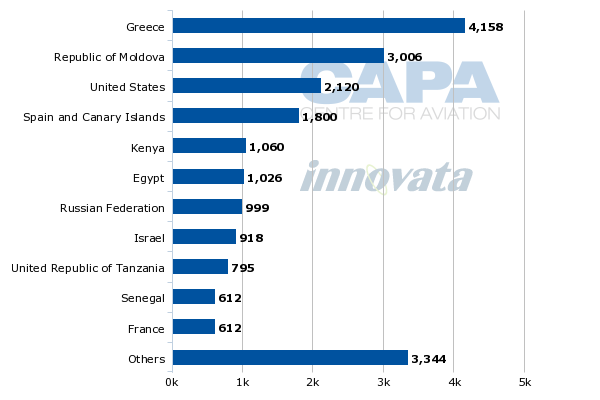 Meridinana's bases are in Sardinia and Sicily

The airline’s biggest airport base by seat capacity is in Olbia on the island of Sardinia and this is also the location of its headquarters. Its original aim, when it was established in 1963 by the Aga Khan, was to promote tourism in Sardinia. The Sardinian city of Cagliari also features in its list of top 10 airports, at number three. The island of Sicily is also represented in the list, in the city of Catania.

Both Milan airports and Rome Fiumicino are in the list, the remainder of which consists of regional Italian airports. There are no foreign airports in Meridiana’s top 10. 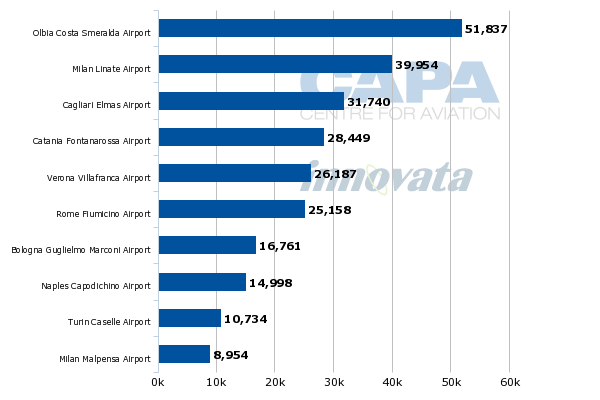 Meridiana still has a fairly high market share at its “home” bases in Sardinia and Sicily, but by no means dominant. It is the leading carrier by number of seats at Olbia Airport, with a share of 47%, ahead of easyJet on 22%. However, it is number two to Ryanair at Cagliari and number two to Alitalia at Catania. At all three airports, the Alitalia Group (including Air One) and leading European LCCs have a significant presence.

Meridiana has some quite strong positions in Italian mainland airports, although competition continues to intensify. It is number two at Milan Linate, behind Alitalia Group, but number four in the wider Milan three airport system (behind Ryanair, Alitalia, easyJet and Lufthansa). It is the leading carrier at Verona Villafranca, number two to Ryanair at Bologna, number three behind easyJet and Alitalia at Naples and number four at Turin (behind Alitalia, Ryanair and Lufthansa). 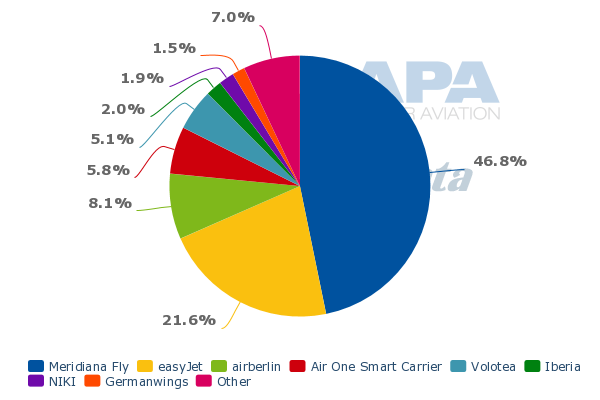 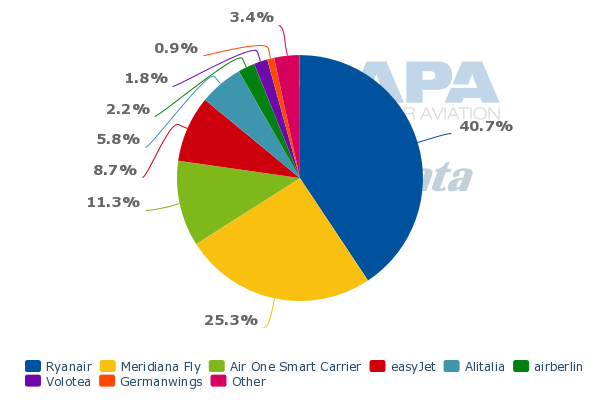 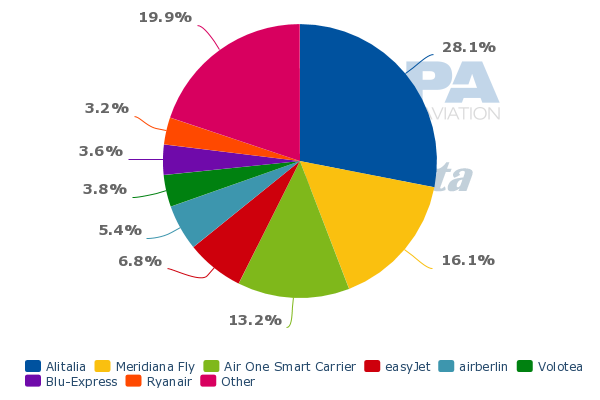 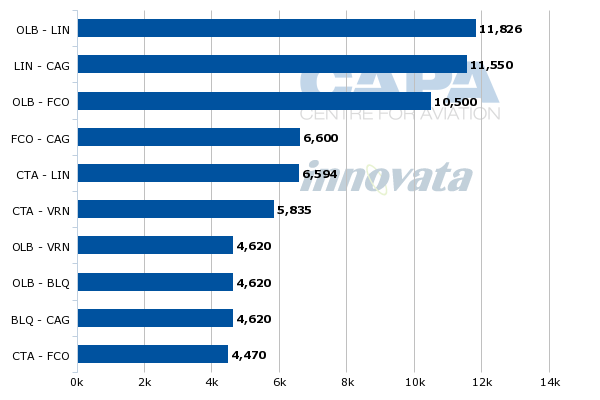 Meridiana is ranked number one by seat capacity on seven of its top 10 domestic routes and number two on the other three (week of 22-Jul-2013, source: Innovata). It is the monopoly operator on four of these routes, all of them links between Sardinia and the Italian mainland. However, where it does not enjoy a monopoly, competition is keen.

On four of the routes, Meridiana faces competition from one or both of Europe’s two leading LCCs, Ryanair and easyJet. It competes with the Alitalia Group (including Air One) on six of the 10 routes.

On its international routes, Meridiana appears to have some strong niche positions, in terms of market ranking. It is number one by seat capacity on seven of its top 10 international routes and the only carrier on four of these. It is ranked number two on three of the 10 routes. 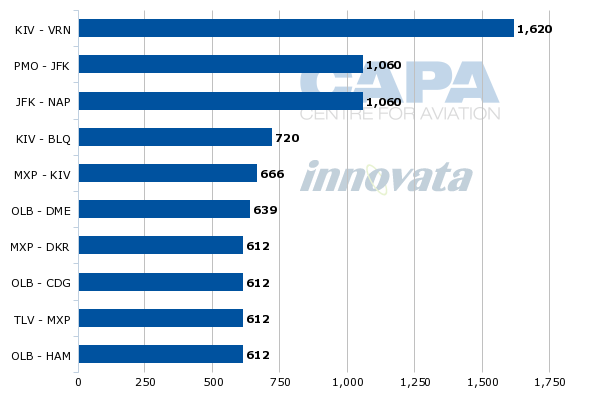 An ageing fleet, with many aircraft over 20 years old

According to the CAPA Fleet Database, Meridiana had a fleet of 27 aircraft as at 23-Jul-2013, of which 63% were leased. The majority of these aircraft are narrowbodies, reflecting the carrier’s largely domestic and short-haul network, but also includes four Boeing 767 aircraft. The fleet includes some ageing aircraft: the 767s have an average age of more than 21 years and there are 10 MD80s with an average age of almost 25 years.

Based on CAPA Fleet Database figures, the average age of the overall fleet is around 18 years. This compares with average fleet ages in the low single digits for the leading LCCs and less than 10 years for Alitalia. 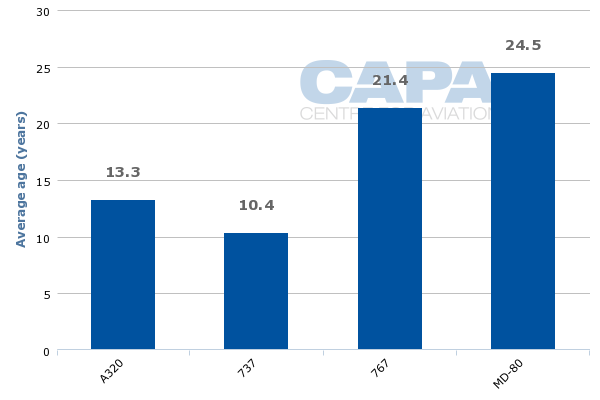 The above fleet data does not include subsidiary Air Italy, which, according to the group’s 2012 annual report, had a fleet of 12 aircraft at 31-Oct-2012 (four 767s and eight 737s). Air Italy, which merged with Meridiana in 2011, is now fully integrated into the group and its brand is no longer operational.

Heavy losses in FY2012, leading to recapitalisation and restructuring plan

Meridiana’s most recent annual report was for the 10 month period ended 31-Oct-2012. Using consolidated group results, which include subsidiary Air Italy, it carried 3.7 million passengers (18% less than in the proforma figure for the same period of 2011), offered 8,614 million ASKs (30% down) and had a fairly low load factor of 63% (61%).

The group’s total revenues were EUR580 million (down 22% on a proforma basis) and its operating loss was EUR83 million, after adding back one-off write-downs of fleet and goodwill. Its operating margin of minus 14.4% compares with Alitalia’s minus 3.3% for 2012. EUR17 million of revenues were received under the “territorial continuity” regime for Sardinia and Sicily, under which Meridiana fulfils public service obligations on certain routes in return for government grants.

Its net loss was EUR190 million (proforma loss of EUR67 million in the first 10 months of 2011) and it ended the financial year with negative shareholders’ equity of EUR112 million and net debt of EUR136 million. In view of its perilous financial circumstances, Meridiana and Air Italy’s operating licences were suspended in Jan-2011 and provisional licences issued.

This led to a recapitalisation of around EUR200 million in Apr-2013 and its withdrawal from the Milan Stock Exchange after parent Meridiana S.p.A took full control of all its shares. The major shareholder in Meridiana S.p.A is the Aga Khan. Meridiana recovered its licence in Jun-2013.

The company’s new business plan, agreed in Feb-2013, includes reducing the fleet and targeting load factor improvements, cutting routes with low/negative margins, strengthening the core business in Sardinia (including seeking the renewal of the “territorial continuity” regime), cutting labour costs, increasing synergies between the two airlines, and reduction of overheads.

Using Meridiana’s consolidated results for FY2012, a figure of EUR7.70 cents can be calculated for cost per available seat kilometre (CASK) for the 10 month period.

It did not report its average sector length or other data from which this could be calculated, but the chart below indicates an estimate of where the group might sit on a plot of CASK against average sector length. This positions Meridiana among the more cost efficient legacy carriers, but significantly higher cost than the LCCs against which it increasingly competes.

Mreidiana's biggest competitor, Alitalia, is not on the chart below as it does not report ASK data. A simple comparison of total cost per passenger gives EUR153 for Alitalia, below the EUR180 calculated for Meridiana, yet Alitalia’s route structure means it probably has a higher average sector length and this should typically mean higher cost per passenger.

Meridiana’s lower load factor (63% versus 75% for Alitalia) means that they probably both have a similar cost per seat, but its shorter average sector length suggests that its CASK is likely to be commensurately higher than Alitalia’s. 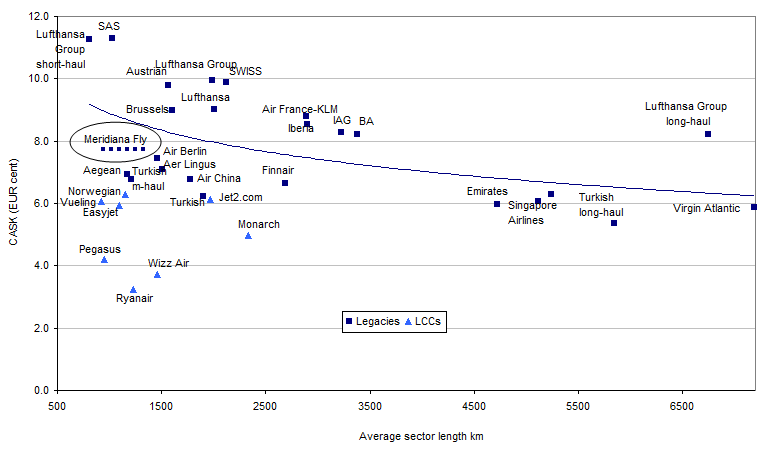 In summary, it can be concluded that Meridiana has no cost advantage over Alitalia and has a significant cost disadvantage against the LCCs. It has a network niche, based on historic strength in Sardinia, Sicily and some Italian regional cities. However, this may not be sufficient to compete against Alitalia’s better international network (including routes available through its alliance partners) and the more attractive fares offered by LCCs.

To some extent, the “territorial continuity” regime may have protected Meridiana on some of its domestic routes, but it has made heavy losses even so.

Further recapitalisations may be required in the future.