Mauritius is pursuing an ambitious hub development strategy aimed at positioning the small Indian Ocean country for transit traffic in the fast-growing Africa-Asia market. The government is investing in expansion and fleet renewal at Air Mauritius while also promoting the hub to other airlines.

Following the 12-Jul-2016 launch of Guangzhou services Air Mauritius has overtaken Ethiopian as the African airline with the largest Asia Pacific network. Air Mauritius is keen to continue expanding its operation in Asia and in parallel to develop its now limited African regional network to support Mauritius’ hub aspirations.

AirAsia X plans to launch services to Mauritius in Oct-2016, becoming the only Asian airline in the Mauritius market. Competition has already intensified in the market with the launch of services from Turkish Airlines, and Emirates' starting to deploy its high density 615-seat A380. The intensifying competition could threaten Air Mauritius' newfound profitability but the airline is also eager to forge new partnerships.

Air Mauritius currently offers fewer frequencies than Ethiopian – and other major players in the Africa-Asia market – since it relies primarily on inbound tourism. As Air Mauritius starts to pursue more transit traffic it will likely add more frequencies, and should start to attract the volumes needed to support a thicker, more competitive schedule.

As a result, Guangzhou gives Air Mauritius a total of six weekly flights to mainland China and eight to Greater China (including Hong Kong). Air Mauritius is the third largest airline in the China-Africa market, accounting for 12% of total nonstop seat capacity.

Air Mauritius has been the only airline with nonstop flights between China and Mauritius since Nov-2015, when China Southern suspended twice weekly service between Shenzhen and Mauritius after only 17 months of operating the route. China Southern was initially looking at launching other routes to Mauritius and using Mauritius as a hub for Africa but has since decided to focus on using Nairobi instead, which it launched in Aug-2015. Nairobi is the hub of its SkyTeam partner Kenya Airways.

China has been Air Mauritius’ main growth market in recent years and there are huge opportunities for further growth. In 2013 Air Mauritius launched services to Beijing and resumed services to Shanghai as it implemented a network restructuring, which included a reduction in capacity to Europe.

See related report: Air Mauritius is on the road to recovery with an Asia-Africa focused network 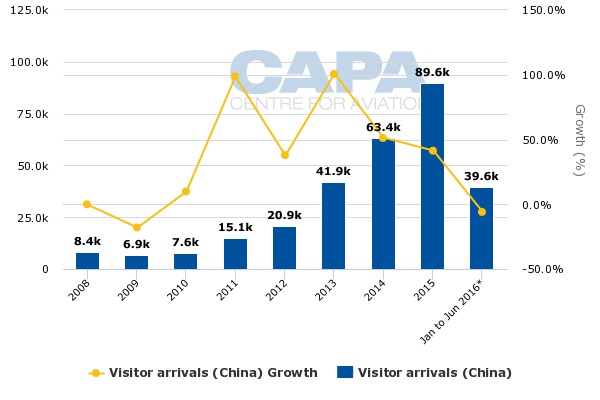 Air Mauritius will need to rely more on China-Africa connections

Air Mauritius will also have to contend with intensifying competition in the Mauritius-China market after AirAsia X launches three weekly flights to Mauritius on 7-Oct-2016.

AirAsia X will need to rely heavily on connections to China as Mauritius-Malaysia is a small local market. Mauritius only recorded 2,557 Malaysian visitors in 2015 while the outbound market (Mauritians heading to Malaysia) consisted of approximately 13,000 passengers, according to Statistics Mauritius data.

Even if there continues to be a slowdown in Chinese visitor numbers and AirAsia X takes away market share, Air Mauritius should still be able to grow in the Chinese market by better promoting connections in the broader China-Africa market. There are huge opportunities for Air Mauritius in carrying passengers from mainland China to continental Africa.

To capture a significant slice of the fast-growing Africa-China pie Air Mauritius will need to bolster frequencies to its Chinese destinations as well as to its regional destinations in continental Africa. It will be difficult to compete with the main players in the China-Africa market – led by Emirates and Ethiopian – without better connections.

Thicker schedules are also necessary for Air Mauritius to succeed at securing more sixth freedom passengers between its other Asia Pacific markets and Africa. None of Air Mauritius’ other seven destinations in Asia Pacific are served daily.

Unlike Ethiopian or Kenya, Air Mauritius also does not yet have the network or frequency in Africa to compete effectively for Asia-Africa transit traffic. Air Mauritius' network is currently not balanced to support east-west flows as it has only six destinations in continental Africa. Air Mauritius also has three international destinations within the Vanilla Islands, but these are small markets with more demand from Europe than Asia.

Air Mauritius is starting to build up its regional network in Africa, which is necessary to feed a larger Asian operation. Dar es Salaam in Tanzania and Maputo in Mozambique were launched in May-2016. However, both destinations are being initially served with only one weekly flight and are tagged with existing destinations. Dar es Salaam is served via Nairobi in Kenya and Maputo via Durban in South Africa.

Johannesburg is the only African destination served daily. Durban and Nairobi are served three times weekly with the other two Durban flights continuing to Cape Town. (The other two Nairobi flights operate as a turnaround service.)

Air Mauritius currently has less than 18,000 weekly international seats within Africa (including the Vanilla Islands), compared with approximately 123,000 seats for Ethiopian and 75,000 for Kenya Airways.

Air Mauritius’ African flights also are not currently scheduled to connect with most Asian markets in both directions. The only exceptions are Hong Kong and Shanghai. For the India routes, Guangzhou, Perth and Singapore same-day connections are only available from Africa to Asia. For Chengdu and Beijing same-day connections are only available from Asia to Africa.

Air Mauritius had previously served Southeast Asia with one weekly flight to Singapore via Kuala Lumpur and two weekly turnaround flights to Kuala Lumpur. A deal with Singapore Changi Airport, which has been keen to improve its Africa connections, prompted Air Mauritius to focus on Singapore and only serve Kuala Lumpur with a one-stop product. (The decision to downgrade Kuala Lumpur from nonstop to one-stop likely provided an opening for AirAsia X.)

Air Mauritius is relying heavily on connections beyond Singapore. In announcing the new nonstop service the airline said it would leverage Singapore’s position as a hub for Asia Pacific. Air Mauritius has interline and codeshare agreements with partner airlines covering flights from Singapore to 18 cities in 10 countries.

However, Air Mauritius does not have a codeshare with Singapore Airlines or any other Singapore-based airline. Most of the offline destinations currently offered via Singapore are very small markets from Mauritius. For the new Mauritius-Singapore route to be viable over the long run, Air Mauritius will likely need stronger connections on both ends.

The Mauritian government stated that the agreement with Singapore accelerates its plans to develop a regional aviation hub. Changi agreed as part of the deal to provide SGD2 million in incentives, and to help promote Mauritius alongside Air Mauritius.

However, securing Asia traffic via Changi will not be easy.

There are several hubs now competing for Africa-Asia traffic, generally with better connections. Even in the small Mauritius-East Asia and Mauritius-Southwest Pacific markets, Changi will have to start competing against Kuala Lumpur once AirAsia X launches services to Mauritius.

This further underscores the need for Air Mauritius to bolster its African connections, which would enable the airline to pursue a much wider passenger base for its Singapore service.

In Part 2 of this report CAPA will look in more detail at the intensifying competition in the Mauritius market and how this may impact Air Mauritius' newfound profitability and its ability to further develop an Africa-Asia hub.