JAL’s shares tumbled 9.5% yesterday, after the Nikkei reported that the carrier was likely to post a net loss of USD13.3 billion in the current financial year, due to a huge restructuring charge of approximately USD12 billion related to fleet write-downs. The benchmark Nikkei average fell 0.5%.

On the other end of the spectrum, Hainan Airlines’ shares jumped 4.6%, upon the release of the carrier’s Dec-2009 traffic highlights, which revealed continued double-digit passenger and cargo growth. 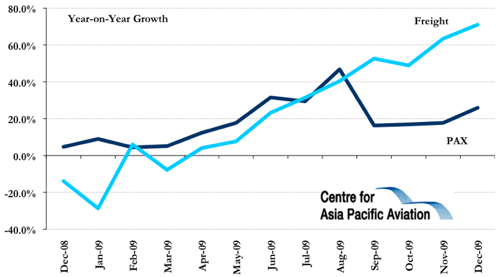 Commenting on the recent AirAsia agreement, Macquarie Private Wealth stated, "we view Qantas' strategy of forging an alliance on the LCC front with AirAsia as astute, providing opportunities to reduce unit coasts and capex in the medium term."

Macquarie Equities and Goldman Sachs also commented positively on the AirAsia agreement, with Macquarie Equities stating "we retain Qantas as our top pick in the transport and aviation sector", adding, “whilst ongoing leverage to the rebounding Australian economy is the key driver in near-term Qantas earnings, we believe closer ties with AirAsia are laying a solid foundation for incremental Qantas growth in the medium term". 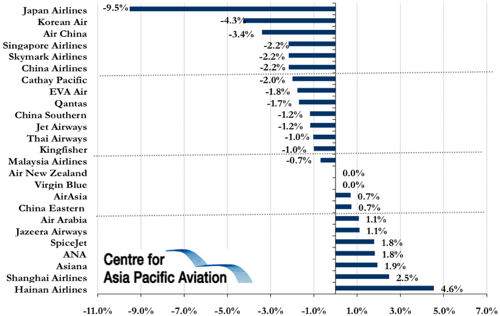