Air travel in Australia and New Zealand has been recovering well in 2022. Domestic capacity has returned particularly strongly, and while the international rebound started later, it has followed a sustained growth trend. This is an encouraging picture after the volatility and false starts of the past few years.

The following presentation was made at the CAPA Australasia-Pacific Aviation Summit in Adelaide on 13-Sep-2022 by Adrian Schofield, who is Aviation Week’s senior air transport editor for Asia-Pacific and also a CAPA analyst.

Charts and data help illustrate the extent to which demand has recovered in Australasia, and what this has meant for international and domestic market dynamics and aircraft fleets.

While the market revival is very promising for airlines, they still face some challenges. The most immediate is ensuring that a recent spike in service disruptions does not return to derail progress.

Australian domestic capacity has been on a rollercoaster ride

Needless to say, it has been a turbulent few years for Australia’s domestic capacity.

The chart below depicts the large swings caused by COVID-19 restrictions and state border closures.

This was followed by a gradual recovery, extending into 2021 (which is the red line). These gains were wiped out by the Delta wave from Jul-2021.

Then there was another recovery before Omicron hit in early 2022 (represented by the green line). However, this drop was less severe than during the Delta wave, and capacity rebounded to essentially 100% of pre-pandemic levels in the period Apr-2022 through Jul-2022.

After that, capacity eased back slightly, partially due to the well publicised disruptions occurring as airlines ramped up their operations.

Australia’s international capacity has been slower to rebound, as with most other countries.

The chart below shows that it remained fairly flat until mid-2021, when there was a significant bump mainly due to the establishment of a travel bubble between Australia and New Zealand.

This increase was fairly short-lived though, and a more sustained increase started from around Nov-2021, linked to phased border openings.

This increase levelled off from about Jul-2022, reaching 57% of pre-pandemic capacity.

For much of the COVID-19 pandemic the aircraft that were flying were far from full.

Australia’s international passenger load factor (PLF), represented by the yellow line on the chart below, was under 50% for 23 straight months, dropping to lows in the single digits. It did not rise above 50% until Mar-2022.

Domestic PLF – represented by the blue line – fared much better, and returned above 50% around Jul-2020.

International and domestic PLFs are now essentially at pre-pandemic levels. 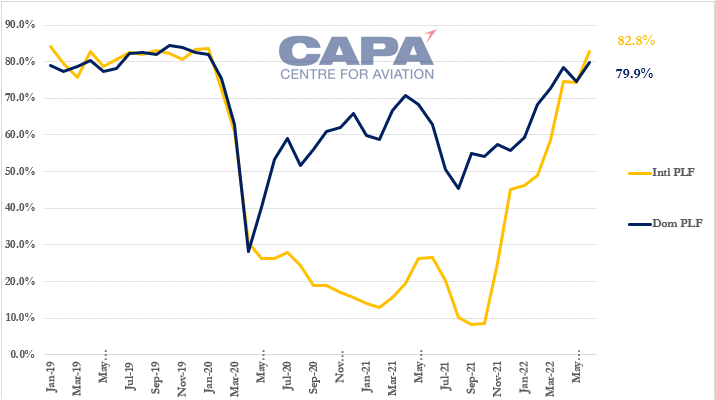 One of the previous charts showed that Australia’s international capacity – including all airlines – is at 57% of 2019 levels.

The next chart reveals that the Qantas Group’s international capacity has reached 65%. This indicates that Qantas’ international recovery is occurring faster than that of the overseas airlines – at least in the Australian market.

New Zealand’s recovery has followed similar patterns – with some exceptions

Turning to the New Zealand market, this chart shows that domestic capacity shifts followed changes in restrictions and lockdowns. The Delta wave hit slightly later in New Zealand than in Australia, and then the Omicron effect appeared in early 2022. Domestic capacity is now back up to 91%.

During the COVID-19 pandemic there was very little international feed in the domestic network, but this was partially offset by greater domestic tourism.

We can see similar movements in New Zealand’s international capacity as we did in Australia.

For example, the Tasman travel bubble created a similar bump in capacity in mid-2021. However, the sustained increase did start later than Australia’s as border restrictions eased.

New Zealand’s international capacity has now levelled off at 54% of pre-pandemic levels.

During the upcoming southern summer season we can expect to see another increase, as more overseas airlines restore services and Air New Zealand adds back more widebodies.

The next graphic compares Australia/New Zealand recovery rates with those in other markets.

The two Australasian countries have recovered far better than the Asia-Pacific average, and better than the Southeast Asia rate. The Australia/New Zealand international recovery is a lot faster than in the Northeast Asia region. This is to be expected as Northeast Asia includes markets like China, Hong Kong, Japan and Taiwan, which have been slower to recover.

An exception is Singapore, which has set the pace in the Asia-Pacific region in terms of capacity recovery.

Europe and North America have both recovered ahead of Asia-Pacific, as border restrictions in these regions were generally quicker to be removed. 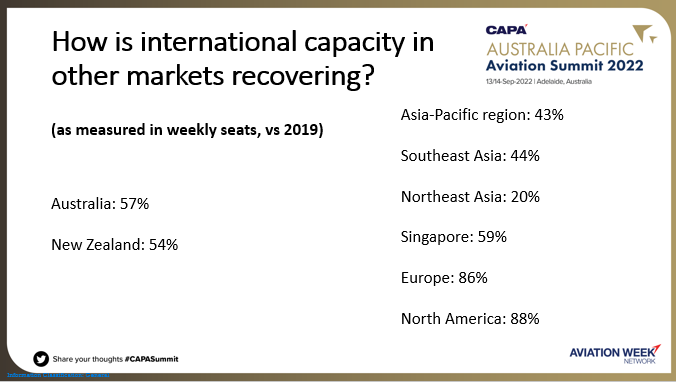 In 2021 – the last full year of data – China fell to sixth, with just 2.7% of the market. This shows both the importance of the China market to Australia, and also the effect of China’s tight border rules.

It is also worth noting that New Zealand had the leading share in 2021, by quite a wide margin. 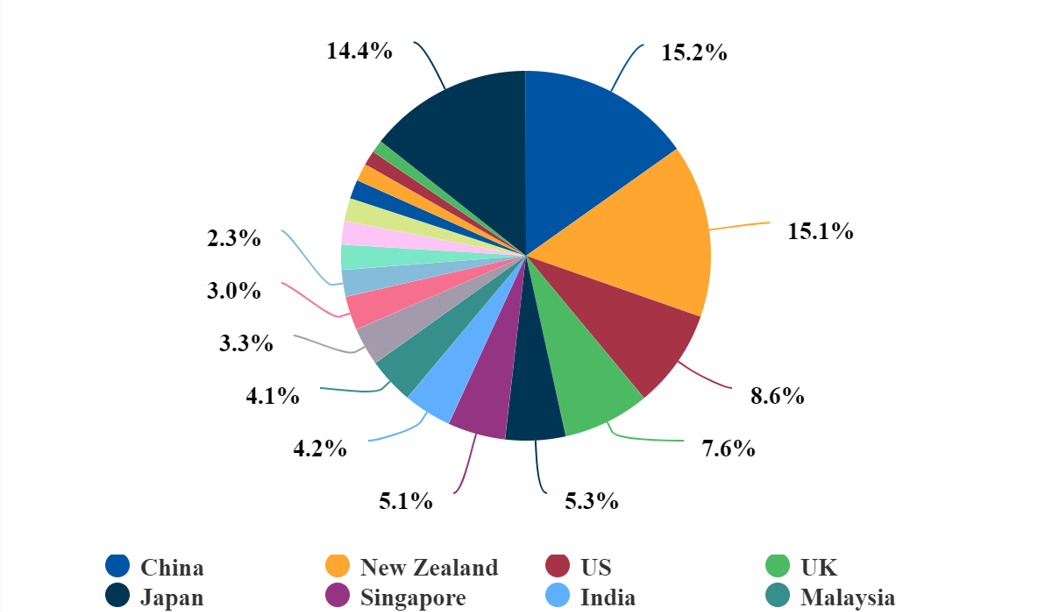 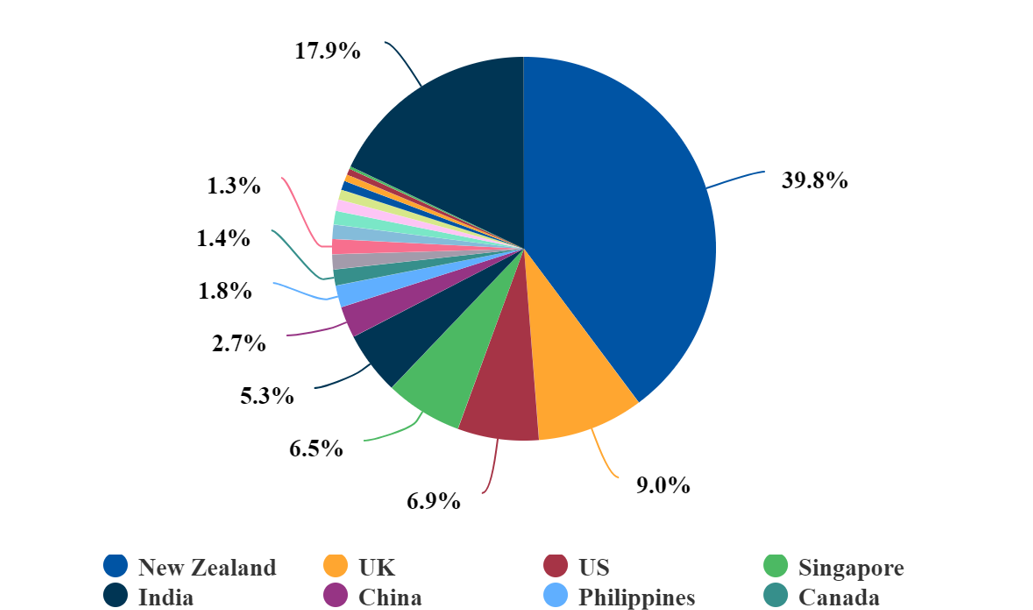 The next chart looks at Australia’s international market using a different measure – weekly seat capacity. This accounts for two-way flows a lot more than the previous chart. In 2019, China was sixth, Hong Kong seventh and Japan ninth. In the 2022 version, all three are out of the top 10 – China is 12th, Japan 13th and Hong Kong 17th. 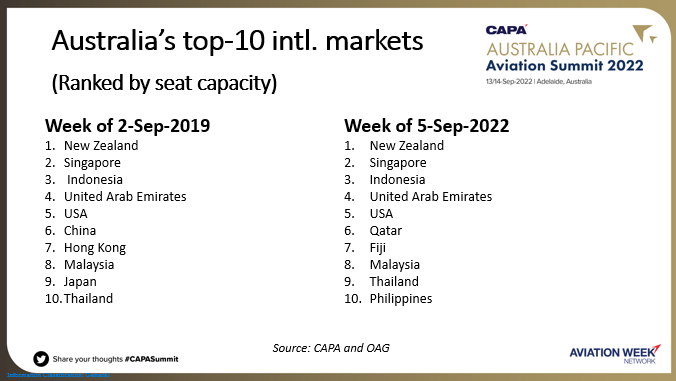 Turning now to Australian domestic capacity share, the chart below shows that Qantas has about 40%, Virgin Australia 30%, Jetstar 20%, and Rex 6%.

At the same point in 2019 Qantas and Virgin had about the same share as they have now.

Virgin's subsidiary Tigerair Australia accounted for a 5-6% capacity share in 2019, but it has since exited the market.

Jetstar has grown its share slightly since 2019, and Rex has increased the most – thanks to the jet services it has added.

Looking ahead, the growth plans of Rex and the entry of Bonza will both affect the market share picture.

Australian domestic capacity share, as measured in seats for the week of 5-Sep-2022 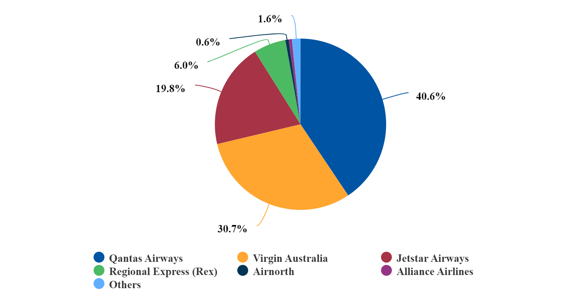 Narrowbody fleet has recovered, but widebody fleet will take longer to rebuild

The chart below looks at changes to the Australasian (i.e. Australia and New Zealand) narrowbody aircraft fleet, comparing active and inactive totals.

The region’s total narrowbody fleet now stands at 291 aircraft, having reached pre-pandemic levels in Apr-2022 to May-2022.

More growth is likely, partly due to Rex and Bonza.

Australia/New Zealand: passenger narrowbody fleet, in service vs inactive, 2020 to 2022 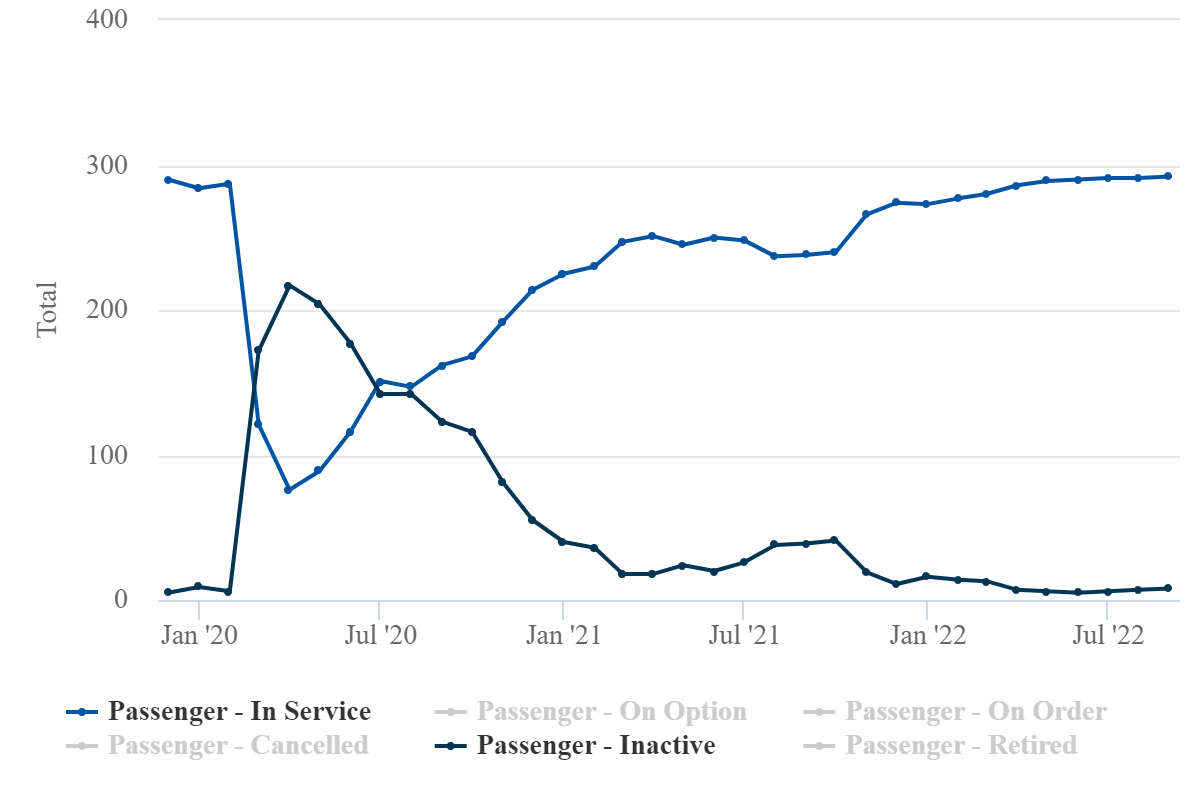 Meanwhile, the Australasian widebody fleet has been much slower to return to service.

There are now 66 active widebodies, versus 107 before the pandemic. So that equates to a recovery rate of 62%.

Current plans are to add another 14 widebodies over the next year. But at least in the medium term the widebody fleet won’t fully recover to its 2019 levels.

Australia/New Zealand: passenger widebody fleet, in service vs inactive, 2020 to 2022 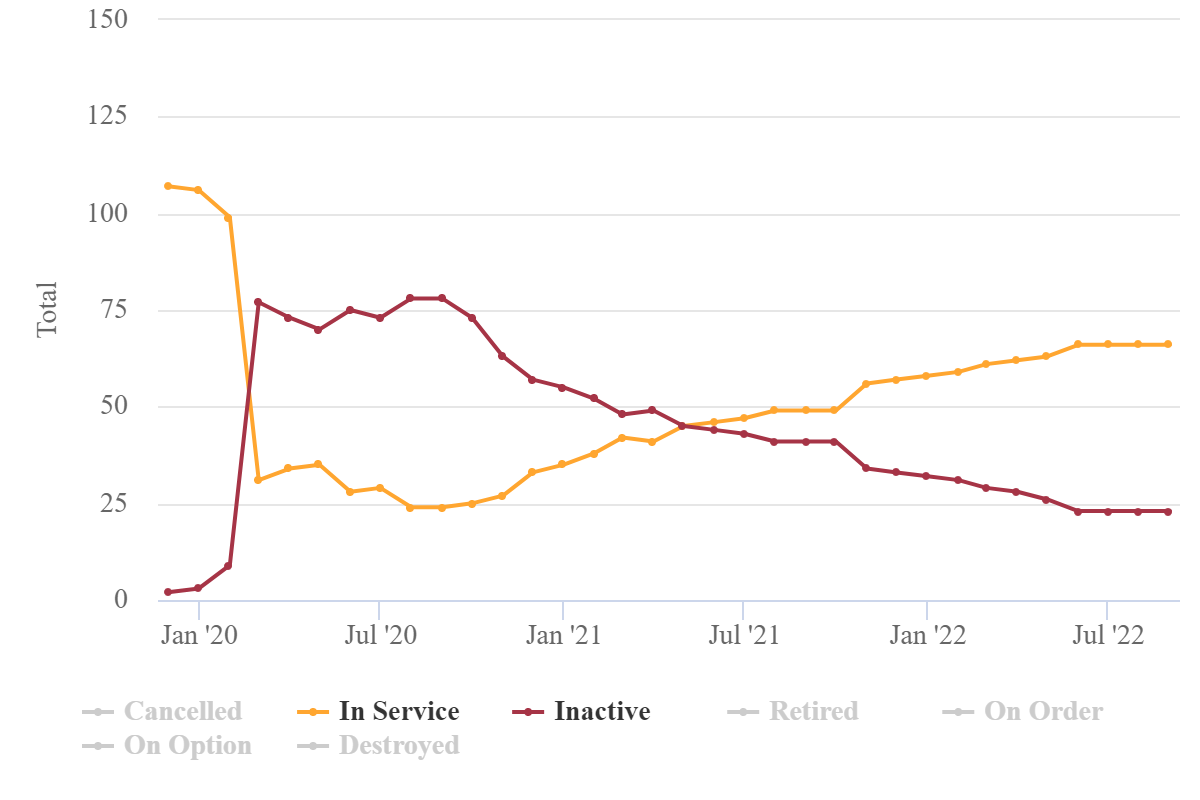 Despite recovery, the Australasian airline industry still has some question marks hovering

While Australasian airline markets are generally recovering quite well – particularly in relation to the Asia-Pacific average – airlines here still face some questions and challenges.

One of the immediate concerns has been resolving the system disruptions that have been capturing headlines in recent months, such as cancellations, delays and mishandled baggage. Airlines will need to make sure that these problems have been addressed so they don’t constrain growth rates again.

Another big question for Australasian airlines is how long border restrictions remain in place in important tourist markets such as China, Hong Kong and Japan. There are also more minor COVID-related travel frictions remaining in some other overseas markets.

Beyond COVID-19, there is the looming risk of economic slumps or slowdowns, either globally or in specific markets.

There is still some uncertainty about long term demand trends. Travel demand is strong now, due to a pent-up desire to travel combined with constrained capacity.

But what happens when the first wave of post-pandemic demand eases, and more capacity returns to the market? Airlines will have to take this question into account as they formulate growth plans.

There is also the question of whether there are any long term structural shifts in international demand patterns, such as a reduction in business travel.

This will only become clear when travel has returned to its new normal state.