The UK’s second biggest gateway, Manchester Airport is steadily emerging from the downturn thanks to a pick-up in low-cost and long-haul activity, particularly from Middle East carriers. Manchester Airport’s Head of Aviation Sales, William Pearson, told CAPA the airport is already starting to see strong passenger growth, “with international traffic showing a significant improvement on last year, following on from the strong performance of our cargo operation in recent months.”

Over 85% of the airline’s weekly capacity is now on international routes – a record for the airport. The bulk of this international capacity is deployed to other Western European cities, but North Atlantic and particularly the Middle East are improving. 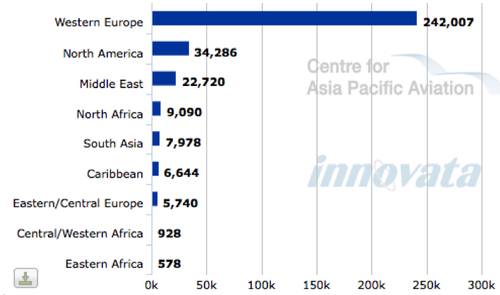 Manchester had four successive months (October-January) where overall passenger numbers have increased. “This has mainly been due to new services and more frequencies on long-haul routes, most notably Emirates launching a second daily flight from Dubai using an A380 – the latter making Manchester the first regional airport in the world to have a service from the new airliner”, Mr Pearson said.

“We have the most new services for any UK airport” this summer, Mr Pearson declared. The highlights are as follows:

Icelandair is also changing from four times weekly via Glasgow to a three times weekly non-stop this summer, which reduces frequency but adds overall capacity.

Flybe is the airport’s biggest airline by seats per week, followed by Monarch, Thomson Airways and easyJet. 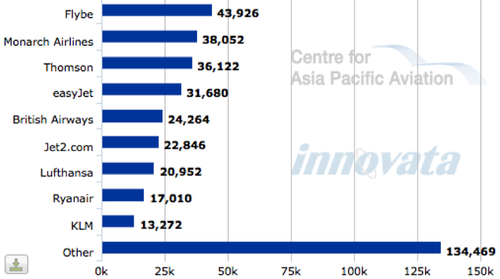 Business fares on key routes to Heathrow, Amsterdam, Frankfurt and Paris CDG are trending upwards, in another positive sign for Manchester and surrounding economy.

Return Business Class fares from Amsterdam to Manchester: Oct-2010 to May-2011 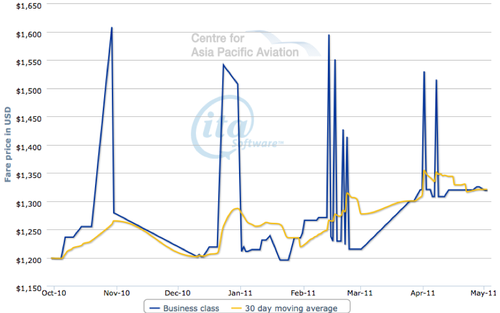 Mr Pearson said, “We’re very confident. The airport wants to carry on developing, with the long-haul network regarded as a vital part of the airport’s future. Our catchment area is vast; it extends from the East coast to West coast of the country, North into Scotland and South to Birmingham. Our research shows that around 1.5 million people within our catchment do not know that it’s possible to fly anywhere in the world from Manchester with direct or one stop services on a daily basis so it’s targeting people who we know are driving and getting the train right past Manchester to travel to a long haul destination."