On 11-Jun-2019 Ryanair announced an agreement to buy the start-up airline Malta Air and use it to operate its low cost operations in Malta. Ryanair has already transferred its six Malta-based Boeing 737-800s to its new subsidiary's AOC, although they will not be branded under Malta Air until summer 2020.

The deal was done with the support and cooperation of the Maltese government, which wanted to solidify Ryanair's ties to the country.

This has caused some to question the future of the flag carrier Air Malta, which is owned by the Maltese state. Although the legacy airline reported a profit for the year to Mar-2018, it had struggled with profitability over the past decade, in no small part due to competition from Ryanair.

The Maltese government has said that there is room for both airlines, operating different business models and networks.

Malta is the third largest European island aviation market after Cyprus and Iceland (following the demise of WOW air in Mar-2019, Malta could possibly jump ahead of Iceland in 2020). Air transport is, therefore, vital to its connectivity.

Schedules data from OAG indicate that capacity growth will be approximately 7% in 2019, the slowest rate since 2016 but still a strong increase compared with global growth expected to be more like 5%. 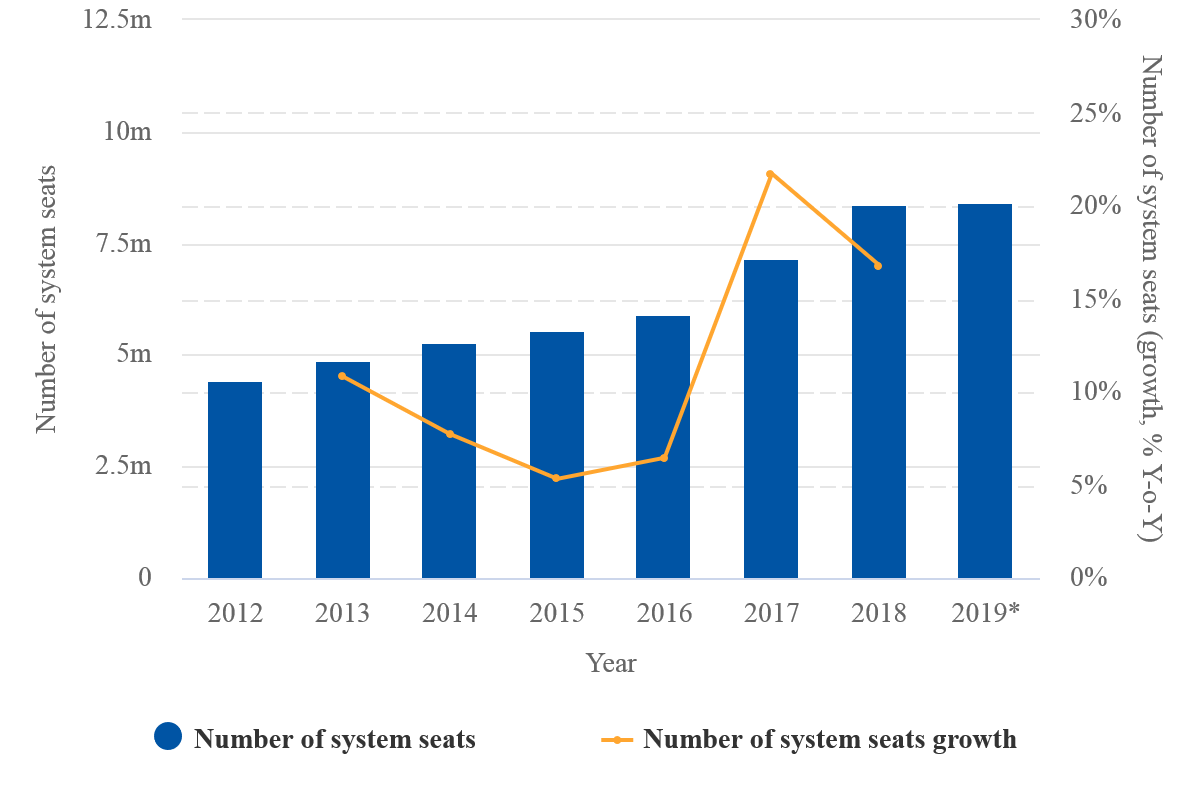 *The values for this year are at least partly predictive and do not cover the whole year.
Source: CAPA - Centre for Aviation, OAG.

Ryanair is the leading airline by seats in Malta

Based on OAG data for the week of 26-Aug-2019, the summer peak, Ryanair is the leading airline in Malta, with 32.3% of seats. However, it is only fractionally ahead of Air Malta, which has 32.1% of seats in the same week.

The two are each far ahead of number three easyJet, which has 5.9%, and fourth placed Wizz Air, whose share is 5.3%. Lufthansa is the biggest non-Maltese, non-LCC airline, with 4.5% of seats, followed by Emirates with 2.5% and Turkish Airlines with 2.2%.

The two leading airlines in Malta have tussled for the top spot in terms of seat share for several years.

Again using the week of 26-Aug-2019 and equivalent weeks of prior years, they will have swapped the lead three times since 2015.

*Week of 26-Aug-2019 and equivalent week of prior years.
Source: CAPA - Centre for Aviation, OAG.

Ryanair is now noticeably larger by routes and passenger numbers

Although Ryanair and Air Malta have a very similar share of seats to/from Malta in the peak summer week, Ryanair's annual operation is more noticeably the larger of the two as it is less seasonally skewed.

Ryanair has said that it carries 3 million passengers a year in Malta. Although it does not say which year, this is likely to be a recent figure.

Scheduled capacity to/from Malta is entirely short/medium haul and dominated by destinations in Europe, which account for 96.8% of seats (Western Europe 80.3% and Eastern/Central Europe 16.5%) in the week of 26-Aug-2019. 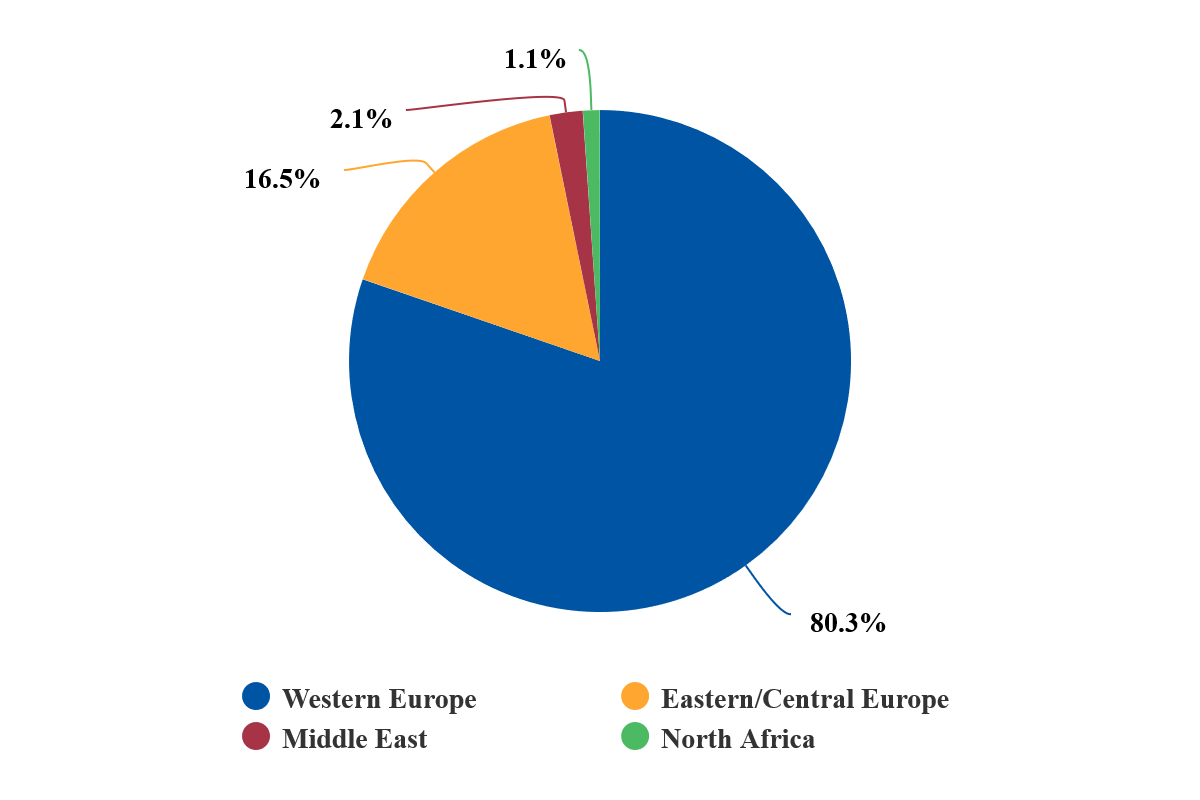 Since the equivalent week of Aug-2016, when there were 79 routes in total, the number of Europe routes has grown by 36, whereas route numbers to Middle East and Africa have each grown by two.

*Week of 26-Aug-2019 and equivalent week of prior years.
Source: CAPA - Centre for Aviation, OAG.

Air Malta has an advantage over Ryanair on routes to North Africa and Middle East, although services to these regions are dwarfed by those to their main battleground of Malta-Europe.

Air Malta is the leading airline on Malta-North Africa, which Ryanair does not serve. In addition to competing with Tunisair to Tunis, Air Malta is the sole operator on Malta to Casablanca and Cairo. Ryanair's acquisition of Malta Air offers the potential to develop its North African network.

There are no others apart from these three on Malta-Middle East.

Ryanair has transferred seven aircraft to the Malta Air AOC

These transferred aircraft include all six that formed Ryanair's fleet at its Malta base.

These six aircraft will be rebranded under Malta Air livery by summer 2020 and will be joined by at least four more within three years. Ryanair is also transferring 200 Malta-based crew onto local contracts and to create more than 350 jobs with Malta Air.

In addition to the Malta Air branded fleet, Ryanair plans the gradual transfer of aircraft from its fleet based in France, Italy and Germany onto its Maltese AOC. It plans at least 50 Maltese registered aircraft over time, although the majority will not be based there.

Among other things, it appears to be aimed at increasing its flexibility in two important areas.

One is labour relations and costs.

The establishment of separate operating subsidiaries provides Ryanair with alternative vehicles for its negotiations with unions.

In addition, the Maltese AOC now gives it flexibility for crews operating Maltese registered aircraft "to pay their income taxes locally in France, Italy and Germany instead of Ireland where they are currently required to pay income taxes under the group's Irish AOC". Presumably, they can also pay their taxes in Malta.

The second is in branding.

Ryanair has been very successful in growing to be Europe's largest airline by passenger numbers with just one brand. However, and in spite of its Always Getting Better programme of customer service improvements, not all travellers are enamoured of its brand.

The new brands Lauda (Austria), Buzz (Poland) and now Malta Air are largely free of associations with Ryanair and give flexibility to grow in any part of Europe where the parent brand may meet obstacles.

Until now, Maltese aviation has been a near duopoly between a struggling national carrier whose future has often looked precarious and a foreign, very profit-focused LCC with no commitment to Malta other than to make money there. The exit of one or the other would seriously damage the island's connectivity.

The Maltese government has now given itself options should Air Malta falter in its turnaround from long term losses. Ryanair has increased its flexibility around both labour and brand.

For Malta, if not for Air Malta, Ryanair's acquisition of Malta Air should be positive for its connectivity and tourist traffic.