Shares in Malaysia Airports Holdings Bhd (MAHB) surged 8.0% yesterday, as the company announced plans to proceed with its USD87.1 million construction programme, through the award of a key contract.

MAHB awarded Gadang Engineering Sdn Bhd and Bukit Jerneh Quarry Sdn Bhd a contract worth USD87.1 million for work under the proposed development of the new Low Cost Carrier Terminal and associated works at Kuala Lumpur International Airport. The contract, awarded on a 70:30 proportion to Gadang and Bukit Jerneh Quarry, is expected to be completed on 18-Dec-2010. Gadang stated the contract was expected to have a positive impact on the group's earnings and net asset base for the financial year ending 31-May-2010, and 2011.

Also in the Asia Pacific region, shares in Airports of Thailand (AoT) dipped 1.2%, upon the release of the Group’s traffic report for Dec-2009 and 12 months ended 31-Dec-2009. Passenger numbers for the full year declined 0.9% year-on-year, as domestic traffic rose 5.4% year-on-year, absorbing a 4.5% year-on-year decline in international traffic. Cargo tonnes, however, dropped 11.8% year-on-year in 2009 to 1.1 million tones.

In the spotlight, Bangkok International Airport increased passenger traffic by 73.7% year-on-year to 4.1 million in Dec-2009 (due to last year's weak base, reflecting political protests that closed the airport for a few days in Dec-2008). For the full year 2009, passenger numbers at the airport rose 5.0% year on year.

The full traffic report for Airports of Thailand (AoT) in Dec-2009 and 12 months ended 31-Dec-2009 is available in today's edition of Airport Business Daily, which contains over 50 strategic news updates from around the world, including the latest traffic headlines: 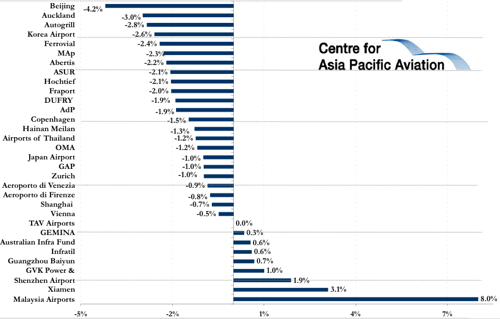