Malaysia Airports Holding Berhad (MAHB) surged 9.5% yesterday, as Khazanah Nasional, 67.74% stakeholder in the airport’s operator, stated its financial restructuring in 2009, has given MAHB a stronger financial base to undertake selected overseas ventures in India and Turkey, while also embarking on the proposed Low Cost Carrier Terminal (LCCT) project.

Earlier in the week, MAHB announced plans to proceed with its construction programme, awarding Gadang Engineering Sdn Bhd and Bukit Jerneh Quarry Sdn Bhd a contract worth USD87.1 million for work on the development of the LCCT and associated works at Kuala Lumpur International Airport. The contract, awarded on a 70:30 proportion to Gadang and Bukit Jerneh Quarry, is expected to be completed on 18-Dec-2010. Gadang stated the contract was expected to have a positive impact on the group's earnings and net asset base for the financial year ending 31-May-2010, and 2011.

Beijing’s 2nd airport to commence during 2010

Beijing Airport gained 1.0% yesterday. The CAAC confirmed plans to commence construction of a second airport in Beijing during 2010. The airport, to be built in the Daxing District, is one of 25 airport construction and expansion projects that comprise the USD13.2 billion to be invested in China's airport infrastructure in 2010. The airport is earmarked for completion in 2015 to ease traffic pressure on the capital.

Fraport up, but German traffic declines for first time since 2002

Other financial and traffic reports in today’s Airport Business Daily edition include: 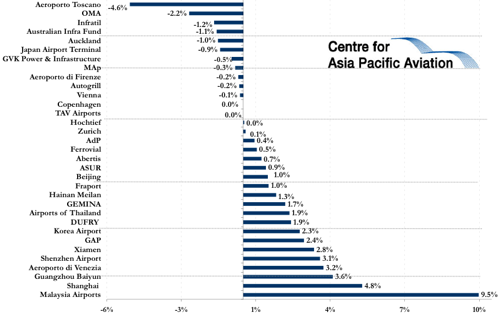