Malaysia Airlines poised to enter growth phase, but yield concerns persist. Where to with alliances?

Malaysia Airlines (MAS) is entering a rapid fleet and network growth phase, emboldened by fresh funding support under a well-supported rights issue and a return to profitability (albeit slight) in 4Q2009. Investors liked the result, sending MAS’s shares up over 5% yesterday. But a 30% year-on-year yield collapse in the fourth quarter, resulting in a 25% slump in revenue is a major concern as the carrier embarks on an aggressive growth phase. Will the wheels just spin faster with little to show on the bottom line over the next few years? And where is MAS at with its alliances strategy?

Malaysia Airlines returned to profitability in the fourth quarter ended 31-Dec-2009, posting a net profit of RM610 million (USD179 million), rebounding from a MYR300 million net loss in 3Q2009 and an improvement over its RM46 million net profit in 4Q2008. 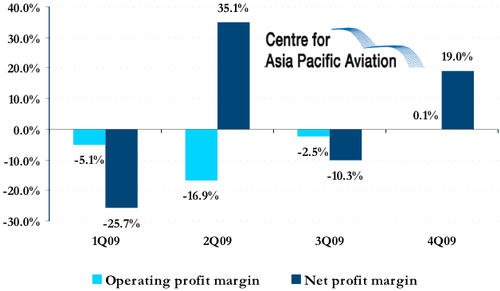 But the net result was almost entirely due to a MYR582 million derivative gain on its fuel hedging programme. Without this gain, net profits would have fallen and Group operating profits actually slipped from MYR66 million in 4Q2008 to just MYR4 million (USD1.2 million). It was an improvement in the sense that MAS had accumulated operating losses of MYR632 million in the previous three quarters. 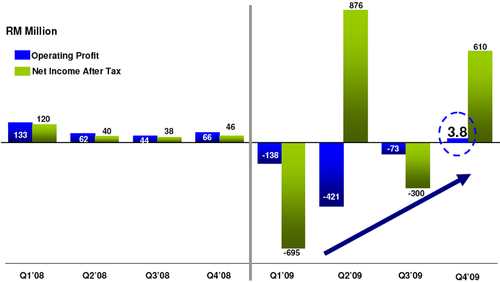 On an annual basis, MAS reported a net profit of MYR490 million for FY2009 compared to MYR244 million net profit a year earlier. This was primarily attributed to derivative mark-to-market gains on its fuel hedging programme of MYR1.15 billion. The operating margin in 2009 was -5.4%. 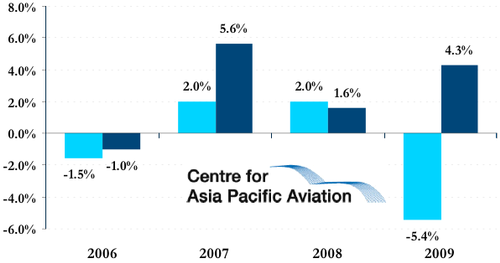 MAS stated its balance sheet “remains healthy”, with cash and negotiable deposits of some RM2.95 billion as at 31-Dec-2009. This article is an abstract available to CAPA Members, as well as subscribers to Asia Pacific Airline Daily. The full report also contains the sections, data and analysis: