The World’s Favourite (white knight) Airline, Lufthansa, confirmed on Friday it has filed for European Commission approval for its planned takeover of Austrian Airlines. Lufthansa’s shares rose 2.4% on the day, while Austrian Airlines closed 2.1% higher. The Commission, which launched an investigation into the takeover in Feb-2009 over pricing and state aid concerns, has set a deadline for the first phase review of the case of 17-Jun-09. That puts it in the midst of key milestones in Lufthansa’s bids for bmi and Brussels Airlines.

The bmi deadline is meanwhile nearing, and the German carrier is reportedly seeking to extract more from the deal. Lufthansa has reportedly demanded bmi Chairman, Sir Michael Bishop, inject approximately GBP100 million into the UK airline to avoid the risk of it breaching regulatory rules on capital reserves, according to The Sunday Times. Sir Michael has reportedly refused, downplaying the risk of a breach. On 14-Apr-08, Lufthansa notified the EU of its plans to acquire a majority of UK airline, bmi.

Lufthansa’s takeover of Brussels Airlines hit a snag last month over competition concerns. The EC’s decision was delayed by 15 days until 01-Jul-09 to study remedies offered by the companies. The Commission’s investigation into the deal was launched in Jan-2009.

Elsewhere, Air France-KLM’s shares surged 6.6%, possibly because La Repubblica reported 25%-owned Italian loss-making unit, Alitalia, stated it had no need of any further recapitalisation. Load factors at the Italian airline have reportedly increased from 43% in Jan-2009 to around 65-66% and accounts are “in line with the budget." 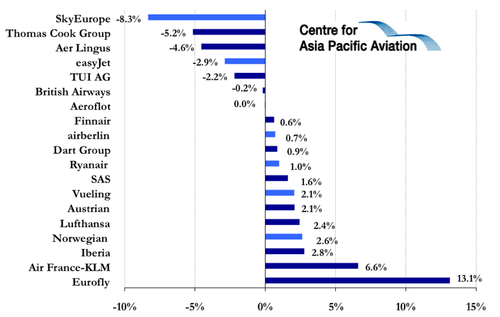