Shares in Lufthansa gained 3.1% yesterday, as the Frankfurt DAX added 0.72%, climbing for the first time in three days.

CA Cheuvreux raised its share price estimate for Lufthansa yesterday from EUR11 to EUR15. Cheuvreux also upgraded its 2010 industry earnings estimate, stating it expects “breakeven or higher, depending on the airline”.

Shares in British Airways were down 0.8% yesterday. 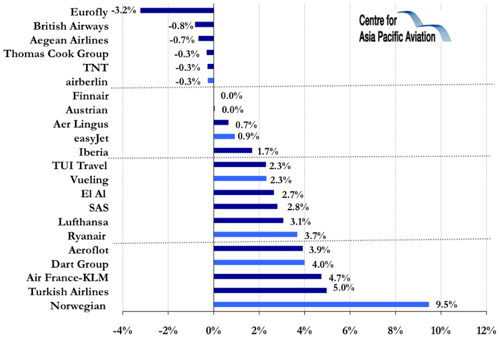 IATA presented its proposals for climate change talks to the UN Secretary General’s Summit on Climate Change in New York, which takes place in the lead up to the United Nations Framework Convention on Climate Change (UNFCCC) meeting in Copenhagen, to be held during Dec-2009.

The paper also outlined guiding principles to ensure that the global sectoral approach results in emissions reductions, retains funds for investment in environmental initiatives for aviation, preserves a level playing field, provides access to global carbon markets and ensures that airlines cover the environmental cost of their emissions.

IATA Director General and CEO, Giovanni Bisignani, stated “climate change is a global problem. Aviation is a global industry. And we need a global approach for this industrial sector if we are to deal with climate change effectively.

“Mechanisms designed for ground-based polluters will not work effectively for aviation which can emit CO2 across borders and over the high seas even on a single flight. And already uncoordinated national and regional schemes are creating a patchwork of punitive taxes that fill government coffers, but do little or nothing to effectively manage aviation’s emissions,” said Mr Bisignani.

“The Kyoto Protocol directed states to address aviation through ICAO. Its global standards and cooperation with industry have made air transport the safest form of travel. A global sectoral approach for aviation can leverage this same leadership to deliver results for aviation and the environment,” said Mr Bisignani.

“Our targets are tough. Air transport is the first industry to commit to carbon-neutral growth at the global level. And we have done it with an aggressive timeline of 2020. Our four-pillar strategy of technology investment, efficient infrastructure, effective operations and positive economic measures will make our vision a reality and is already showing results. Aviation’s emissions are expected to fall by 7% in 2009, of which 5% is a result of the recession and 2% directly related to the strategy. IATA’s ‘Green Teams’ have saved 34 million tonnes of CO2 through operational efficiencies since 2005. Our work on improving infrastructure, including shortening air routes, saved a similar amount of CO2 since 2004. But our success depends on governments playing their part. They must implement more effective air traffic management. The introduction of NextGen air traffic management in the USA and the Single European Sky have the potential to save 41 million tonnes of CO2 annually. Governments must also create the legal and fiscal framework to support the development of sustainable biofuels for aviation,” said Mr Bisignani.

“Aviation is unique in its ability to move globally as a sector - from safety to e-ticketing. Retaining a global sectoral approach at Copenhagen will deliver the best results in managing reductions in aviation’s emissions,” said Mr Bisignani.