Lufthansa gains on the release of the Group’s financial results, despite dour outlook

Shares in Lufthansa gained 2.6% yesterday, upon the release of the carrier’s financial results for the nine months ended 30-Sep-2009. The Group reported an operating profit of EUR226 million, which was down 76.3% year-on-year, as revenue fell 13.2% year-on-year to EUR16.2 billion.

Changes are "structural in nature"

Lufthansa cautioned that the market environment for passenger transportation is “still very difficult” and that the industry is “still a long way away from a recovery”. The airline added that “initial signs of a stabilisation in volumes are far away from making up for the enormous and unrelenting pressure stemming from the massive fall in price levels”. The carrier also stated that it “has to be assumed that a large part of the fall in revenue – particularly in European traffic – is structural in nature”, and thus a structural response is required. On a cost side, Lufthansa stated that volatile fuel prices are an “issue” and they are expected to continue their upward trend in anticipation of an economic recovery”.

Lufthansa stated that Austrian Airlines and British Midland are making “considerable efforts” to restructure, which is intended to bring them back to profitability in the medium term. Lufthansa added that Lufthansa Passenger Airlines, SWISS and Germanwings are also making “great efforts to overcome these challenges”. As part of this, Lufthansa Passenger airlines launched its “CLIMB 2011” programme in the period, aimed at generating EUR1 billion in improved earning by the end of 2011, principally by reducing its cost base.

Lufthansa stated the “sharp fall in revenue and pressure on earnings are assumed for the full year". It added the new companies are also expected to deliver a negative earnings contribution in the fourth quarter, noting "all endeavours are therefore still directed towards avoiding an operating loss for the segment". Lufthansa concluded, "the achievement of this target is subject to considerable risk, though".

Finnair President and CEO, Jukka Hienonen, warned the carrier does “not expect any rapid change in demand structure”, with leisure traffic over the Winter to remain “highly challenging”. Mr Hienonen added Finnair “still has a long way to go before its corporate structures and the operating conditions they create are sustainably competitive. The company's foundations are still stronger than many of its competitors, but a small domestic market requires the implementation of the company's chosen Europe-Asia strategy at the price levels obtainable in an internationally competitive market”. 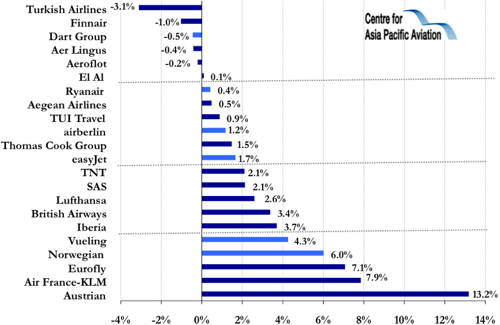