Shares in Lufthansa gained just 0.2%, as the carrier’s debt rating was placed under review. Its debt rating is subject to possible downgrade by Moody’s Investors Service, as the carrier sees “no sign of recovery” and its proposed takeover of Austrian Airlines meets with investor caution. Lufthansa’s current 'Baa3' rating is the lowest investment grade at Moody’s, one notch above a junk rating.

The European Commission (EC) has reached an agreement with Lufthansa on the takeover of Austrian (see below), meaning an important remaining obstacle to the successful conclusion of the future partnership has been overcome. At the same time, the EC stated it received “clear signals that a positive decision is forthcoming in the financial aid proceeding”, prompting the EC to say that it is “highly probable” the takeover will be formally confirmed in Aug-2009 and the deal will be successfully concluded in Aug-2009 or Sep-2009 at the latest. Austrian’s shares rose 3.3% yesterday.

Shares in Air France-KLM rose 1.4% yesterday, while the Paris CAC Index was up 1.5% on close. British Airways’ shares gained 2.1% yesterday, ahead of the London FTSE Index rise of 1.6%. 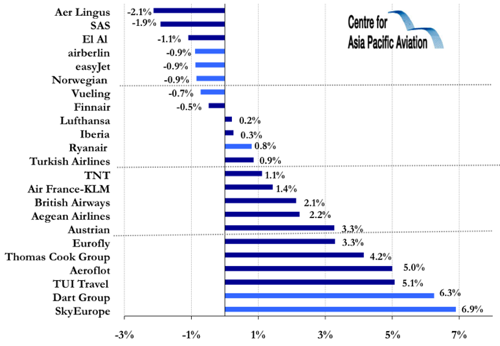 The EC today announced it has reached an agreement with Lufthansa on the takeover of the Austrian Airlines Group. This means an important remaining obstacle to the successful conclusion of the future partnership has been overcome. At the same time we have received clear signals that a positive decision is forthcoming in the financial aid proceeding. It is therefore highly probable that the takeover will be formally confirmed in Aug-2009 and that the deal will be successfully concluded probably still in August, but latest in September. The Austrian Airlines Group will then be a member of the Lufthansa Group, and therefore part of the largest airline group in Europe.

Members of the Austrian Executive Board, Andreas Bierwirth and Peter Malanik, stated, "this is good news for our company. We have worked hard to make this privatisation happen, and are happy the way is now clear for it to go ahead. In Lufthansa, we have found an excellent partner for Austrian Airlines.”

As a member of the Lufthansa Group, the economic basis of Austrian will improve in the long term. This is the case for both revenues and of costs. On the revenues side, the situation of Austrian will improve due to the fact that it will gain access to the international route and sales network of Lufthansa. Austrian currently operates a network of 120 destinations. Lufthansa on the other hand, maintains a network of 242 destinations worldwide. Cooperation in the alliance will significantly strengthen the sales strength of Austrian.

There are also considerable benefits on the cost side. These range from economies of scale in purchasing through to cost reductions due to joint development of systems and maintenance of aircraft.

Joining the Lufthansa Group “is not an excuse to simply sit back on our laurels. Lufthansa has a huge amount of power. This power will be a huge help to us, particularly once markets have normalised again. But it will be up to us, and us alone, to pull the right levers to ensure we can transform that power into the required speed and altitude. We will need to do our homework. We need to steadily implement the packages of measures that we have already launched to increase our profitability. If we can do that, we will be successful,” said Austrian.