The market was unmoved.

Iberia (-9.0%) meanwhile did manage to move the market, but not in a direction it would hope. Reporting its concern that it was unlikely to report a profit for 2009, the Spanish flag carrier also announced that it would not be delivering a dividend for the 2008 year. Somewhat ominously, the report also made no mention of the proposed merger with British Airways, which its chairman had previously expected to be concluded by the end of Mar-2009.

And Aer Lingus (+9.0%) meanwhile took a leap in the opposite direction, a welcome move for the Irish carrier. 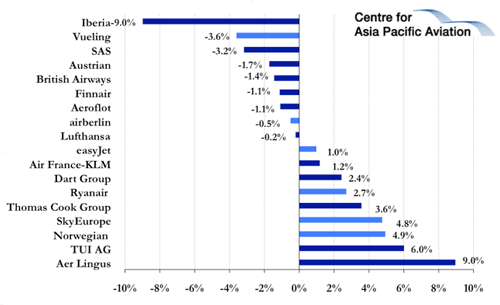 Lufthansa (see also today's full report on Lufthansa - "Lufthansa sees itself "distinctly apart from our competitors"; but shareholders agree - in the wrong direction):

Lufthansa Chairman and CEO Wolfgang Mayrhuber is no shrinking violet. With the airline's report on good 2008 results, the Lufthansa head is clearly seeking to set his airline apart from his weaker colleagues in Europe: "The achieved economic result sets us distinctly apart from our competitors and places us in a positive light," he claims.

But there are some signs of doubt creeping into the market, if not into the Cologne headquarters. The world is an uncertain place at present and many investors' appetite for risk is not what it used to be. The short term has become king and long term goals don't have the shine that they used to.

Lufthansa's share price has fallen more than Air France-KLM and British Airways' this year - and Mr Mayrhuber is "bitter" about that. 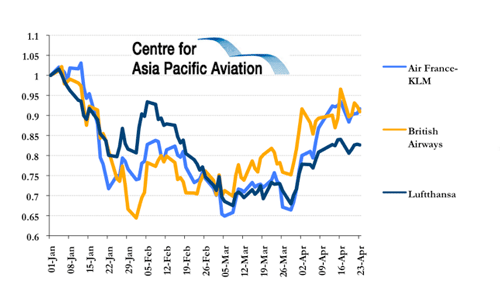