Lufthansa and British Airways evaluate their merger and acquisition plans

Shares in SAS surged 6.5% yesterday, as the carrier reported plans to finalise a deal with its unions on the one hand and Lufthansa (regarding its interest in SAS) on the other.

SAS reportedly had a breakthrough in union negotiations regarding an agreement to lower wages and employment conditions. A carrier spokesman stated, “nothing is final, but negotiations are proceeding in a positive spirit”. SAS is aiming to cut total costs by EUR637 million (SEK6.5 billion) by 2011.

Meanwhile, Lufthansa reportedly plans to come to an agreement with SAS over the Scandinavian carrier's 20% stake in bmi in coming weeks. Under takeover laws, Lufthansa is obliged to make an offer to SAS.

Shares in Lufthansa were stable yesterday.

British Airways hopeful of Iberia deal by the end of 2009

Another potential bmi bidder, British Airways has indicated a merger deal with Iberia may be completed by the end of this year. BA CEO, Willie Walsh stated merger talks have been given additional momentum following Iberia’s appointment of a new Chairman, Antonio Vazquez. Mr Walsh added the carrier is sticking to its demands for no less than a 53% in the merged company. BA and Iberia are scheduled to meet again in the next few weeks.

Mr Walsh meanwhile stated the carrier is no longer in a “fight for survival”, but equally, it does not expect a rapid recovery. The carrier has raised GBP680 million in capital and cut costs since Jun-2009. Shares in British Airways were up 1.7%, while the London FTSE dipped 0.5%. 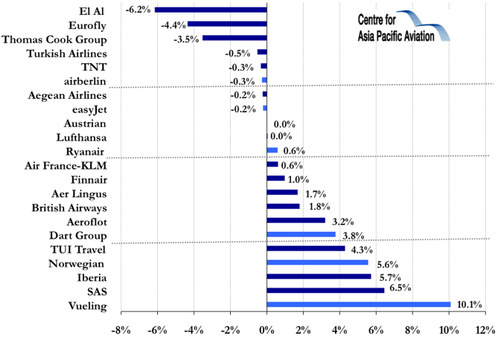