Shares in Lufthansa dipped 1.8% on Friday, despite Virgin Atlantic’s interest to cooperate with the German carrier to counter rising competition on the Atlantic.

Virgin Atlantic CEO, Steven Ridgway, stated it “would make a lot of sense to work more closely” with Lufthansa, following its acquisition of bmi. Virgin Atlantic, which has vigorously opposed the proposed trans-Atlantic alliance between British Airways and American Airlines, is concerned that the tie-up, if approved, would make the competitive landscape much tougher and may encourage it to seek cooperation with other carriers. British Airways’ shares gained 2.8% on Friday, while shares in Air France-KLM lost 3.6%. 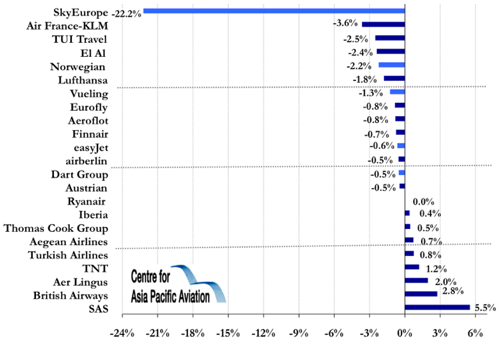