Lonrho (-9.6%) shares slumped, losing the gains it made the day prior, after its LCC subsidiary, Fly540 Zimbabwe, stated during trading it has yet to receive an AOC from the Civil Aviation Authority of Zimbabwe.

The carrier had initially planned to launch operations in Sep-2009, which was later pushed back to Oct-2009. Fly540 Zimbabwe, which is 90%-owned by LonZim, stated it would launch services as soon as possible, with the carrier currently in the process of looking for viable routes. Fly540 is to be based at Harare Airport, serving as a regional freight and passenger carrier, initially with two passenger aircraft and a single cargo aircraft. The airline project is a partnership with local private airline firm, Sol Aviation. 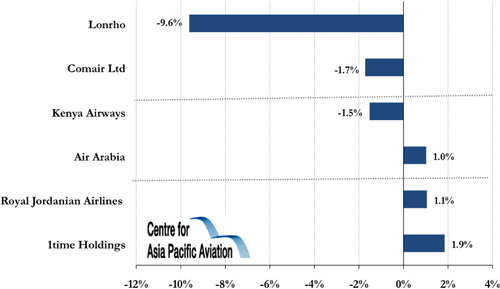