Ryanair CEO Michael O’Leary’s recent musings about a possible low-cost transatlantic project indicate that he believes any such operation would need average fares below EUR100.

This raises the question of just what is a sustainable fare in this market?

Until recently the exclusive preserve of legacy full service carriers, the North Atlantic has seen the entry of LCC Norwegian over the past year.

However, it was always possible to find relatively low fares and Norwegian’s pricing, while lower than that of premium airlines such as British Airways, does not appear to be substantially lower than the average all-inclusive economy fare of Association of European Airlines (AEA) member airlines between Europe and North America.

This report explores some of the key factors in establishing viable pricing for this model.

Mr O’Leary’s thoughts suggested he would aim for a discount of 60% or more to legacy airline fares.

This would undoubtedly drive volume. It would also be greater than the equivalent average discount offered by Ryanair in short-haul. However, it may be difficult to find and sustain the cost savings necessary to make this profitable on long-haul routes, even with a high fare premium cabin as part of the model.

According to an Irish Independent in Jan-2015, Mr O’Leary said: “Our average price on short-haul across Europe is EUR46. We’d want to have an average price in economy on a transatlantic low-cost carrier of under EUR100. The average price should be somewhere in the mid-EUR80s or mid-EUR90s.”

Mr O’Leary has speculated over establishing a transatlantic LCC for many years, using a separate vehicle from Ryanair itself, but has to date not moved beyond the concept stage. One of the keys to Ryanair’s success in short-haul has been its ability to buy large numbers of aircraft at attractive prices at the bottom of the aircraft valuation cycle.

However, the equivalent opportunity to acquire widebody aircraft has not presented itself since the Ryanair chief first started to toy with the idea of a long-haul affiliate and the current order backlog enjoyed by Airbus and Boeing suggests that it may still be years away.

Perhaps Mr O’Leary believes the aircraft value cycle is turning down, or perhaps he believes that lower oil prices make such a project more attractive

For now, our focus is to consider its ticket pricing. How does Mr O’Leary’s suggestion that average fares in economy should be in the mid-EUR80s or mid-EUR90s compare with market rates on the North Atlantic?

Irish airline Aer Lingus is one of the more cost efficient operators between Europe and North America and has one of the shortest average trip lengths (5,430km in 9M2014 versus just under 7,000km for member airlines of the AEA) and so it might be expected to generate lower average fares on the North Atlantic than other carriers.

However, the figure of EUR415 is not the right comparison for Mr O’Leary’s mooted price

First, as noted above, the average trip length for AEA members on the North Atlantic is just under 7,000km. Mr O’Leary is likely to be thinking of a shorter route when musing over his average fare range. (Given London’s strength as an Atlantic O&D market and Ryanair’s strong presence at London Stansted, and from there across Europe, it seems reasonable to adopt a working assumption that any route might have the UK capital at one end).

For example, London-New York is less than 5,600km and London-Boston is less than 5,300km. Using data from AEA STAR for 2012, we can calculate average passenger revenue per passenger and average trip length for different destination regions for Europe’s legacy airlines. As would be expected, a plot of these variables (see chart on right) illustrates that revenue per passenger varies with average trip length.

The second reason why the unadjusted AEA figure of EUR415 per passenger is not the right comparison is that the AEA data include all cabins, premium as well as economy. Typical business class fares can be between three and six times economy fares.

But this is still not quite comparing apples with apples.

Mr O’Leary is talking about average fares, whereas the AEA data is based on total passenger revenue per passenger, which includes ancillaries. Levels of ancillary revenue vary significantly by airline and by route. Ryanair generated 25% of its revenues from ancillaries in FY2014, when its average fare was EUR46, but its average revenue per passenger was EUR62. The global average level of ancillary revenue as a proportion of total revenue is around 7% for airlines tracked by IdeaWorks in its annual analysis of ancillaries.

Assuming Ryanair’s long-haul affiliate manages to generate 10% of revenue from ancillaries. This would equate to roughly EUR10 on top of the EUR95 average fare, giving a total figure of EUR105 in revenue per passenger in its economy cabin. This is a discount of just over 60% to the EUR270 derived above for AEA members.

This exercise suggests an average revenue per passenger of EUR120

This is the sort of level that would be viewed by the market as consistent with an ultra-LCC type of operation if its average trip length were extended to 5,300km. The EUR105 figure derived above for the Ryanair-type North Atlantic operation is 13% below this figure.

The only European LCC currently operating on the North Atlantic is Norwegian. As at Jan-2015, the lowest price available for London Gatwick to New York JFK on Norwegian’s website was EUR279 (GBP209) for most of the year, with two fares at EUR239 (GBP179) in Oct-2015.

These fares look broadly consistent with the LCC curve in the chart below projected to distances of 5,000km to 6,000km, although Norwegian’s average revenue per passenger in economy from London will be higher than this since these are its low fares. This also suggests that Norwegian’s fares are not very much lower than the AEA economy cabin average across the Atlantic, where there are always attractive offers to be found.

That said, London is not representative of all Europe-North America markets, since the strength of London O&D demand can sustain higher prices than elsewhere, Norwegian offers much lower fares on Oslo-New York, for example.

It is also worth noting at this point that Norwegian’s overall profitability has suffered since it launched long-haul routes, suggesting it has faced a challenge in keeping costs low enough.

Our analysis, while fairly rough and ready, suggests that Mr O’Leary’s thoughts on pricing for his mooted North Atlantic venture may be a little too low. But the Ryanair boss is too canny and too experienced just to have got his sums wrong. 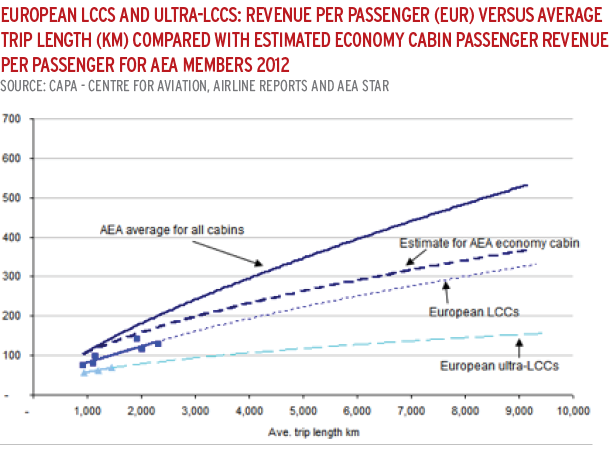 although ancillaries as a percentage of the total tend to be lower on long-haul than on short-haul, even if the actual amount is greater. And there may be innovative ideas in mind.

Certainly, the pricing strategy, including where it is positioned on the spectrum of bundling versus unbundling will be crucial to any new low-cost North Atlantic airline.

Mr O’Leary may also be planning a very highly priced business class cabin to cross-subsidise the economy cabin. Indeed, he has previously spoken of the need for a strong premium offer on any transatlantic venture.

The challenge facing any Ryanair-affiliated long-haul operation in this regard is that it does not currently have significant access to relevant business travellers, either directly through a FFP, or indirectly through corporate travel offices and agents. Moreover, it does not have a brand that is consistent with this market segment and does not offer a global network.

Perhaps Mr O’Leary is merely following his well-worn path of generating publicity around low fares. Of course, the key to sustaining low fares is to have low costs.

A Ryanair-affiliate operating on the North Atlantic is unlikely to be a near term prospect.