The history of intercontinental passenger routes into secondary Chinese cities is brief: as recently as 2010 there was on average just one or more long-haul flight a day into a secondary market. This more doubled in 2011, and in 2015 there will be 11 flights a day. These will be spread across 26 city pairs, up from only four in 2010. Most secondary long-haul routes are to Europe, with the Middle East and Australia prominent. North America is catching up.

Foreign airlines have led the push, namely KLM and Lufthansa. Etihad Airways and Qatar Airways were also some of the first before being joined by others including British Airways and United Airlines. Chinese carriers are gaining a presence on secondary long-haul routes, largely as a result of incentives and subsidies. In 2015 so far there will be eight foreign airlines operating secondary routes compared to five Chinese airlines. 2015 marks the first time a secondary long-haul route (Etihad's Abu Dhabi-Chengdu) will be operated daily across the year. The routes as a group face sustainability challenges, with losses common, but more growth is still likely.

As of Dec-2014, 2015 will see 13 airlines – five Chinese and eight foreign – operate an average 11.5 daily flights on intercontinental city pairs. We define such a route as being to a Chinese city other than Beijing/Guangzhou/Shanghai, over 4500km, not to greater Asia and being flown over 10 times a year. This excludes a number of one-off routes with limited frequency that are effectively charters, like Urumqi-Jeddah or Chengdu-Mauritius. In the case of routes that start late in one year and thus have under 10 frequencies that year, we include them provided they continue to be offered the following year.

One such example is China Eastern's Nanjing-Sydney route that commenced in Dec-2012 with only four flights that year but in 2013 had 152 flights. We count the immediate entry/exit point in China, so Shanghai-Urumqi-Istanbul is considered a secondary route but Fuzhou-Shanghai-New York is not. The data comes from how airlines filed their schedules with OAG.

The dip from 27 intercontinental long-haul routes in 2014 to 26 in 2015 is the result of China Eastern not flying Wenzhou-Rome, which it filed to operate only 13 times in 2014. But growth on other routes more than offsets this loss, and frequencies in 2015 will be higher than in 2014.

History of the annual number and frequency of intercontinental routes into secondary Chinese markets: 2004-2015F 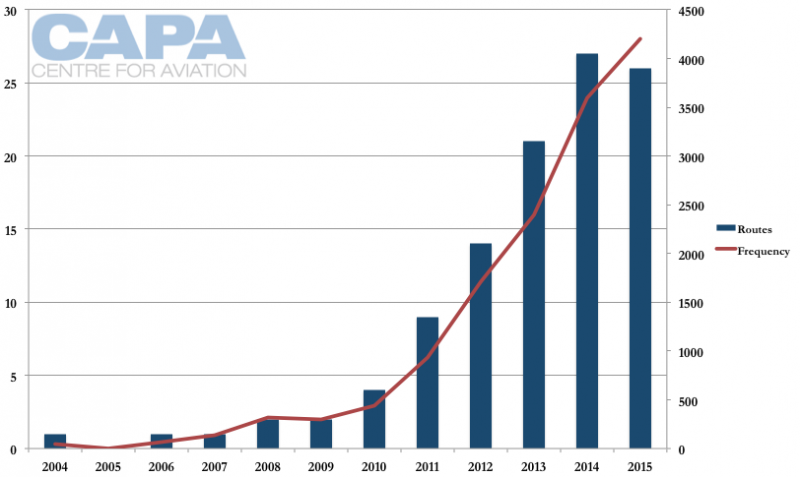 There was technically a secondary intercontinental route in 2004 when China Eastern's Shanghai-Los Angeles service stopped in Harbin, but the flight was effectively carrying passengers only between Shanghai and Los Angeles. The first secondary intercontinental route in recent times commenced in 2006 when KLM offered service between Amsterdam and Chengdu, starting a trend of flying to secondary cities in China's west.

KLM's Chengdu route had been the only secondary city international route in 2007. In 2008, Lufthansa became the second carrier with an intercontinental route to a secondary city when it launched Frankfurt-Nanjing service. Lufthansa and KLM maintained their two routes in 2009. 2010 saw two more routes, KLM's Amsterdam-Hangzhou and China Eastern's Dubai-Kunming, marking the entry of Chinese carriers on secondary routes in recent times.

After 2010, growth kicked off. Some highlights include 2011's arrival of Etihad Airways and Qatar Airways. 2012 saw Air France, Finnair and Sichuan Airlines enter secondary intercontinental markets while 2013 saw the entry of Air China, British Airways and China Southern while 2014 saw United Airlines enter. Hainan Airlines' first secondary routes were the short-lived Urumqi-Istanbul service in 2011 and Shenzhen-Sydney service in 2011 and 2012. Hainan re-entered in 2014.

Despite a growing number of secondary intercontinental routes, profits are often elusive. Air France in 2013 removed Wuhan from its schedules as negotiations soured on the flight's ongoing subsidisation, reported by Le Figaro to be EUR30,000 per flight. An undisclosed agreement was reached and the flight continues to operate. Chengdu has been known to heavily subsidise intercontinental routes, likely a major draw in why so many airlines make Chengdu their first or only secondary market.

Secondary markets are populous, as the oft-quoted statistics show, but are typically low-yielding with still-low propensity to travel and limited premium traffic. The long-term potential is not doubted, and many airlines are in these markets for the long term. Serving a secondary market can help government relations and secure more or improved access to key cities.

As congested prime gateways become restricted, secondary cities have a stronger case for foreign and Chinese airlines. Rather than backtrack through Beijing, Guangzhou or Shanghai, passengers can more directly go to a western hub and then fly west. Foreign airlines need strong partners and here the scene is mixed. KLM is helped by close relations with its SkyTeam partners while British Airways is still looking for closer ties to mainland Chinese carriers. Air China and Lufthansa as well as China Eastern and Qantas should see benefit to their secondary markets from planned joint ventures.

Chinese airlines can benefit from having a stronger local presence and feed, but they are also more likely to be able to launch services from their home base. Moves into secondary markets can be for a number of reasons. It may be at the government's request, a move to prevent another carrier flying the route, a handsome local subsidy or being unable to access prime routes. China Southern for example has said it will not open more long-haul routes unless they are subsidised. Hainan's wishlist of new routes for 2015 includes many secondary Chinese city departures as Air China already flies prime routes from Beijing (Hainan's hub) and Hainan cannot also secure access.

Few secondary long-haul routes have been withdrawn or decreased

As noted earlier, Air France came close to ending Wuhan but continues to operate it while China Eastern has not renewed its very limited Wenzhou-Rome service (which was effectively a charter). During the weak economic environment in 2009, Lufthansa reduced Frankfurt-Nanjing service. The biggest reductions to secondary intercontinental routes have been at Hainan Airlines.

Hainan flew Urumqi-Istanbul 41 times in 2011 while ending in 2012 three-weekly Shenzhen-Sydney service. Service resumption was postponed twice before being cut altogether. Hainan has not flown to Australia with regular service since. British Airways has reduced its Chengdu-London Heathrow during the slow winter season but is building up to longer peak periods.

Most routes have low frequency. Etihad's Chengdu route is the first to go daily

2015 will see on average 11.5 daily intercontinental secondary route daily flights. Likely additional routes to be announced in coming months should see this grow. Some routes like Finnair's Helsinki-Xi'an service are only seasonal.

Despite a large and growing number of routes, it will only be in 2015 the market will see its first year-round daily offering, from Etihad on the Abu Dhabi-Chengdu route. Etihad made the service daily on 30-Mar-2014. Etihad's daily service to Chengdu and Qatar's sizeable secondary city network contrasts to Emirates, which does not fly to any secondary cities.

Conversely however, Emirates has far greater access to Beijing, Guangzhou and Shanghai, including double daily A380/777 flights to Beijing and Shanghai. Emirates would be interested in serving secondary markets but has not been given access that would enable it to grow without reducing existing services to prime cities (which are more profitable). 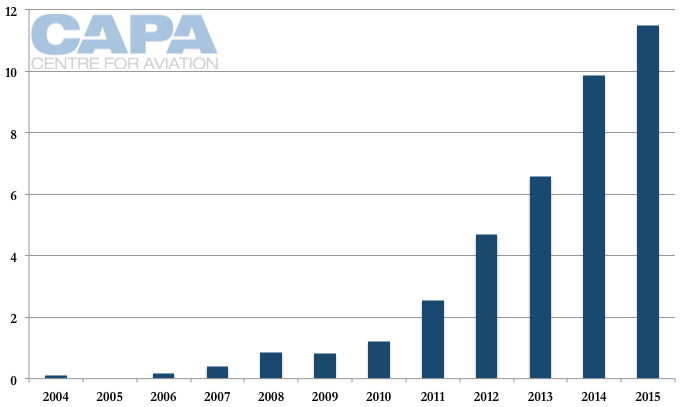 Growth in Chinese airlines will be limited as China's major carriers are already on secondary routes and China will limit new entrants until they have demonstrated robust operations domestically and regionally. Xiamen Airlines will likely be the next Chinese carrier to enter secondary markets, with a likely launch in 2015 to Europe. 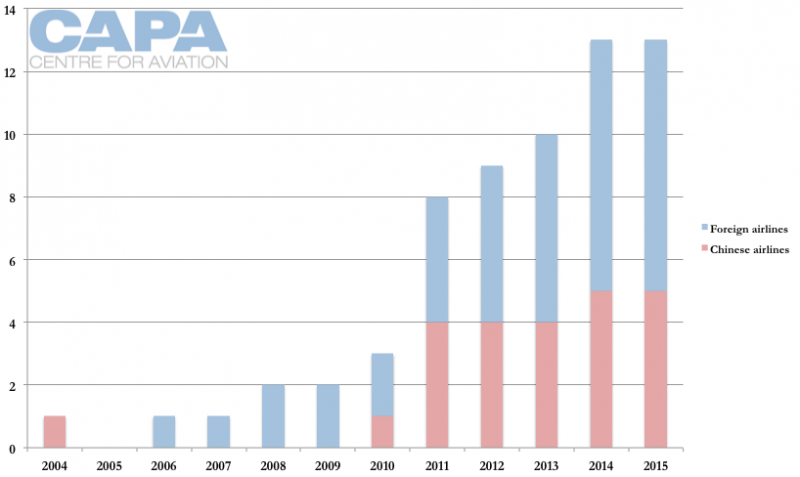 Chengdu and Frankfurt are most popular route pairs

Chengdu is the most popular Chinese city for secondary routes, with Chengdu accounting for 26% of all secondary routes. Nearby Chongqing accounts for 11% and is likely to catch up as airlines view it as a stronger gateway and almost comparable to Chengdu as a western gateway. In previous years Chengdu had a wide lead. 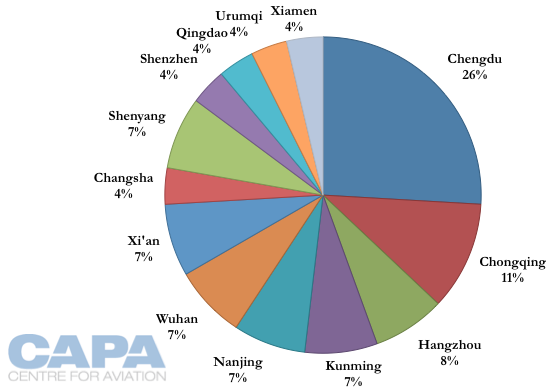 For the foreign port, Frankfurt is the most common (15%), reflecting Lufthansa's presence in secondary Chinese markets but also Germany's status as China's largest trade partner in Europe. Amsterdam, Paris CDG and Doha are the next largest with an 11% share each of routes. Only KLM and Qatar fly to Amsterdam and Doha respectively while to Paris CDG, Air France's single route (to Wuhan) is outnumbered by the two from Chinese airlines (China Eastern to Kunming and Hainan to Xi'an). 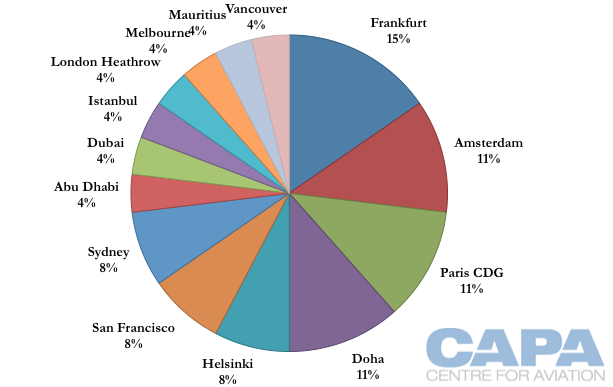 Airlines maintain a long term view on this growth market

It is easy to become excited about the potential for growth in these secondary city intercontinental routes. But just beneath the surface, many still require work and/or time and are far from being standouts. Foreign airlines not yet present in secondary markets seldom express regret. Even Chinese airlines are not that bullish. Still, with frequency generally increasing and history showing few route cancellations, the airlines in the market are taking a long term view that there will be rewards – and subsidies keep them in the short term.

Other airlines are unconvinced that stomaching short term losses will pay out to their favour in the long term. This contention will be the theme as secondary markets continue to grow but are not yet at the point of a Beijing or Shanghai. The benefit of a short term or long term view is still one for the history books, and there are many chapters still to be written.