London Luton airport: aiming to be the UK’s most ‘sustainable’ airport

To some degree, the environment movement has temporarily been sidelined during the global COVID-19 pandemic. But that was never going to be the case for long.

Many airports have taken the opportunity to revisit their position on environmental concerns, and the first out of the blocks in the UK is the fifth busiest airport: at Luton, north of the capital, which has set out its stall to be Britain’s ‘most sustainable airport’.

Luton is the UK’s fifth busiest airport by passenger numbers, behind London Stansted, which is 50 miles (80 km) away to the east.

London Luton Airport has outlined an ambition to become the most sustainable airport in the UK over the next 20 years. London Luton Airport Ltd (LLAL) has already been working to consider how expansion of the airport will meet the terms of both the Paris Agreement and the recommendations of the Committee on Climate Change.

On the matter of the global pandemic, LLAL is currently working to support its operator and airlines with ongoing safe travel and passage through London Luton. At the same time, Luton Council is preparing an emergency budget to deal with the loss of airport-related and other incomes, and costs experienced during the response to coronavirus.

London Luton Airport has outlined an ambition to become the most sustainable airport in the UK over the next 20 years. The airport will develop a greener development model as part of its proposed expansion to cater to 32 million passengers per annum, which is being strongly resisted locally – including in the town’s own council. The single runway airport is on a hill, approximately two miles from the town centre.

Chairman Andy Malcolm stated: "People want us to go even further to mitigate environmental issues, including noise, air quality and particularly climate change, which has become significantly more important to people since our first consultation".

The airport is owned by the council and leased to operators (AENA and AMP Capital); it is the council’s airport company – London Luton Airport Ltd (LLAL) – which has set out its ambition.

The ‘twin challenges’ are formidable

The plan “recognises the twin challenges of delivering a greener development model for an expanded airport in Luton, and supporting essential economic recovery from the impacts of the Covid-19 pandemic for the region and the UK.”

‘Twin challenges’ is an understatement. Objectives are diametrically opposed: to grow traffic and not to grow traffic; or at least that is how the environmental lobby will see it.

LLAL says that its Development Consent Order application to support expansion of the airport from 18 to 32 million passengers per year (mppa) is now expected to be submitted to the government during 2021, rather than in summer 2020 as originally outlined.

LLAL adds, “Since the second public consultation on our expansion proposals late last year, we have been listening carefully to feedback and a clear message that people want us to go even further to mitigate environmental issues, including noise, air quality and particularly climate change, which has become significantly more important to people since our first consultation. We are confirming today that we want to set out a plan for how London Luton can build on its position as arguably the most socially conscious airport in the UK by also becoming its most sustainable.”

LLAL pays a substantial dividend to the council

LLAL continues, “We are serious about this. Our leading social credentials are demonstrated by the annual dividend that supports frontline council services in Luton, and by our investment of more than GBP130 million into key voluntary and charity services since 2004. Whether it’s funding care services for vulnerable children, ensuring our local food bank can support those most in need, or helping community groups respond to coronavirus with our emergency funding, this is what our entire focus is all about.”

The comment on social credentials is an interesting one. Not only in the UK, councils are faced with the conundrum of using airport revenues to cross-subsidise other services – where it is allowed, for example it is not permitted in the U.S.; at least, if the airport wants to carry on receiving FAA grants – and selling off part or all of the equity to private sector partners who find it easier to raise funding for expansion in capital markets.

Luton’s halfway house on ownership and operation would appear to be paying dividends in this respect.

LLAL has already been working ahead of the recent Heathrow court ruling (which found against the third runway there) to consider how expansion of London Luton Airport will meet the terms of both the Paris Agreement and the recommendations of the Committee on Climate Change. Luton Council’s target is to deliver a zero-carbon town by 2040, significantly ahead of the government’s target for the UK as a whole.

LLAL said, “We know a key ingredient will be to work with many partners including the council, highways authorities and public transport providers on an integrated and sustainable public transport system serving the area around the airport. There are many other parts to the puzzle too, and we know there is much more work to be done to support our goal. At the moment it is therefore right that we invest all the time we need on this.”

On the matter of the global pandemic, LLAL is currently working to support its operator and airlines with ongoing safe travel and passage through London Luton. At the same time, Luton Council is preparing an emergency budget to deal with the loss of airport-related and other incomes, and costs experienced during the response to coronavirus.

On revenues generated for the council LLAL says,  “Since 2013 Luton’s ongoing investment in the airport has delivered a GBP21 million increase in yearly revenue to Luton Council, moving from historically about GBP6-7 m[illion] a year to GBP27 m[illion] last year. This enabled the council to protect our town from the high tide of austerity, sadly coronavirus means our communities will now feel the full weight of central government cuts. As a key driver of the economy and already supporting 27,000 jobs across the region, we see it as our duty to protect livelihoods and be at the centre of the recovery process after Covid-19 for the industry and the economy as a whole."

Luton is the UK’s fifth busiest airport by passenger numbers, behind London Stansted, which is 50 miles (80 km) away to the east. It has not undergone a year-on-year decline in those numbers since 2010, and the two main growth years in the decade were 2015 and 2016 (16-19%). 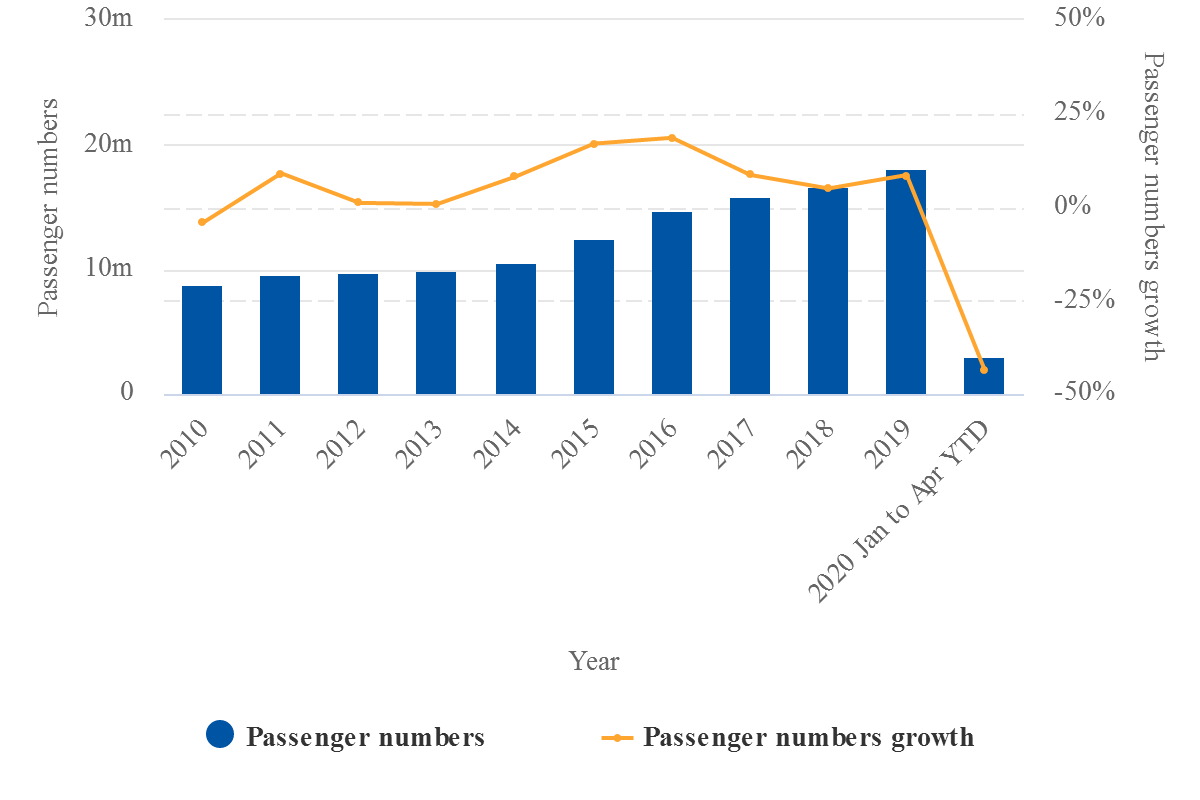 Wizz Air has restarted some routes

The three main airlines at Luton airport are easyJet, which remains grounded as this is written but intends to restart its operations soon; Ryanair, ditto, remaining grounded, and more in evidence at Stansted Airport; and Wizz Air.

The latter airline has actually restarted some routes, and in the week commencing 15-Jun-2020, together with Wizz Air UK, had more than 135,000 seats available at Luton, together with the other live operator, Blue Air (9,000).

Right now, the countries with the largest number of seats are all in central and eastern Europe, the top three being Romania, Poland and Hungary.

People mover could be a game changer

According to the CAPA Airport Construction Database, approximately GBP400 million has been earmarked for capital expenditure on infrastructure projects at Luton Airport, through to this year.

The MPT system is scheduled for completion in 2021, and will be a fully automated, two-way, 24-hour capable people mover based on latest system technology and design innovation. It will run in tandem with an increased number of services on the line that connects the airport with areas to the south of London.