Lisbon’s airports: Montijo – time to get the job finished

The conversion of the Montijo military airbase close to Lisbon into Portugal’s capital city’s second airport is taking almost as long as ‘Brexit’. Indeed, finding a second Lisbon airport, anywhere, has rumbled on for five decades.

Capacity issues at Lisbon’s Humberto Delgado Airport (LHDA) prompted ANA Airports of Portugal to consider ‘annexing’ the Montijo airbase (reported by CAPA-Centre for Aviation in Feb-2017). TAP Air Portugal advised that in order to maintain a hub structure at LHDA it would not use the Montijo facility and also declined to co-finance the development in any way, leaving that responsibility with ANA.

Alcochete and Montijo sites had been proposed but were consistently postponed as part of national cost-cutting measures, and the emphasis fell back on Portela Airport (LHDA). It was in 2017 that Alcochete and Montijo came back on the government’s radar owing to large increases in passenger numbers in successive years – Portugal’s tourism industry has had eight consecutive years of growth, which has helped the country recover from a severe debt crisis and the economic recession of 2010-13.

The government needs to finish the job quickly, or at least to make a start once the environmental assessment is out of the way. After five decades of prevarication the patience of the people is not guaranteed to last much longer.

It was in Feb-2017 that CAPA-Centre for Aviation reported that capacity issues at Lisbon’s Humberto Delgado Airport (LHDA) had prompted ANA Airports of Portugal to consider ‘annexing’ the Montijo airbase.

The airbase is 20km (12.5 miles) by road from the principal airport, across the Vasco de Gama Bridge over the River Tagus. The current airport sits in the middle of residential and commercial districts and cannot be extended much further within its footprint.

Then, in an article in Oct-2018 in CAPA'S Blue Swan Daily, it was reported that even though LHDA was “totally exhausted” of its capacity, TAP Air Portugal would not use the Montijo facility following its anticipated conversion from a military base by 2022 in order to maintain a hub structure at LHDA.

TAP also declined to co-finance it in any way, leaving that responsibility with ANA, which is controlled by VINCI Airports.

It is likely that the airport would mainly service low cost carriers, although TAP has actually had such a unit of its own since 2016, in TAP Express. Ryanair has always been vociferous about moving its Lisbon operations to Montijo, though not so much easyJet and Vueling. Presently, 25% of seat capacity at LHDA is on LCCs, of which Ryanair has 11.7%, easyJet 5.7% and Vueling 3%.

Now Portugal's Minister of Infrastructures, Pedro Santos, has weighed in on the debate.

He commented on the importance of the conversion of Montijo Airbase to handle commercial aviation, qualifying the project as "critical" for Portugal as it is directly linked to the development of the country. Mr Santos stated: "For a peripheral country such as Portugal, airport investment [such as the new airport in Lisbon] is decisive; it is critical for our people to live better".

He added: "We do not have the time…to continue studying alternatives.”

That may have been a pointed reference to two previous and separate attempts to locate a site for a new airport to serve Lisbon.

The search for a new airport began as long ago as 1969. The two sites that were put forward in the late 1990s and early 2000s were at Ota, 28 miles north of Lisbon (another air force base, to be converted for commercial aviation), and at Rio Frio, inconveniently situated next to a nature reserve 26 miles to the east.

The main lobbying was in favour of Rio Frio, but Ota was selected, at a cost of USD2.4 billion, partly because of the projected threat to, and from, the birdlife. Moreover, Ota was situated close to a major rail line and a highway.

In 2007, the year before the credit crunch and subsequent financial crises, Portela Airport (now LHDA) put through 13.4 million passengers – a very low total for a major European capital city airport and one which was then bereft of LCCs. And that was an 8.8% improvement on the previous year.

Growth levels that have been experienced more recently were beyond the imagination of potential investors.

So, interest in developing OTA was lost, but in the same year, 2007, an independent report suggested Alcochete as an alternative location, across the Tagus river estuary from Lisbon.

A public limited company, Novo Aeroporto SA (NAER), was set up, with the shareholders being ANA, the Navigation Agency NAV, and the Portuguese state. Their object was “carrying out all the activities and tasks inherent to setting up and executing the decisions pertaining to the planning and launching of the construction of a new airport in mainland Portugal”.

At Alcochete there was the military training facility occupying the proposed site, but the military agreed to abandon it as long as it could transfer its facility to a different area. A further government-contracted study drew the conclusion late in 2007 that Alcochete was indeed the best location, and the selection was announced publicly in Jan-2008, subject to a public consultation exercise.

However, the timing could not have been worse, as the recession set in – in Portugal as well as the better known Southern European examples of Greece, Spain and Italy.

Despite the public consultation giving the green light to the project, it was consistently postponed as part of national cost-cutting measures, and by the time that mid 2013 came around the project had been omitted from the country’s transportation strategic plan altogether: the emphasis fell back on Portela Airport, which had already been privatised and then changed its name in 2015.

It was only in 2017 that Alcochete/Montijo came back on the government’s radar owing to large increases in passenger numbers in successive years, which VINCI tried to cater for through construction activities but never really got to grips with.

An environmental impact study got in the way of the development, which has been referred to as the ‘Portela plus Montijo’ project. The government gave the green light for it anyway in Jan-2019 but in Oct-2019 Portugal’s environmental agency said the conversion could only go ahead if the project met certain conditions, including measures to reduce noise and protect wildlife.

Tourism has grown enormously and LHDA has played a major part

Portugal’s tourism industry has had eight consecutive years of growth, which has helped the country recover from a severe debt crisis and the economic recession of 2010-13. That is reflected in the airport’s passenger traffic chart. 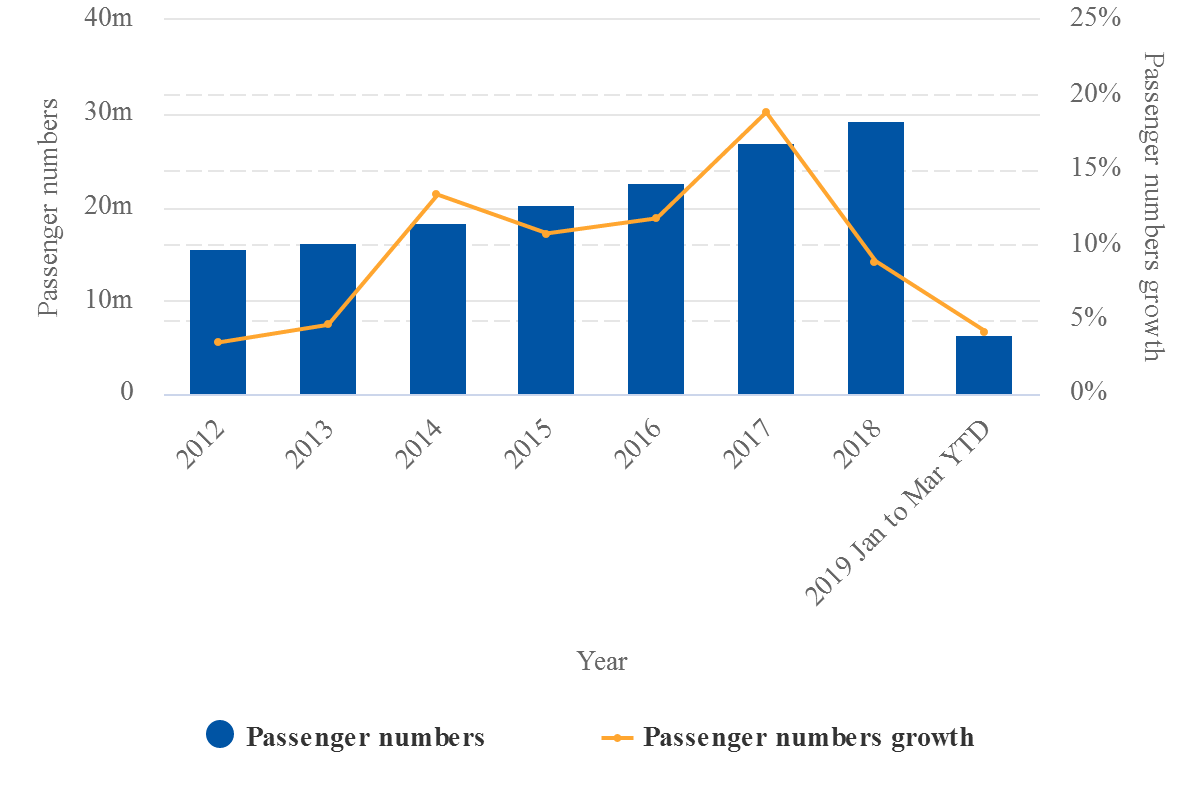 But the government needs to act very quickly now, while there remains a window and before the national mood turns permanently against the Montijo project.