Lion Group full-service subsidiary Batik Air is planning more rapid expansion as it continues to take deliveries at clip of well over one aircraft per month. Batik has added a remarkable 24 aircraft over the last 13 months, giving it a fleet of 30 aircraft, and expects to add another 19 aircraft by the end of 2016.

The planned fleet of 49 aircraft at the end of 2016 should make Batik the third largest airline in Indonesia and eleventh largest in all of Southesat Asia. This is an almost unfathomable achievement for a start-up that only began operations in 2013.

Batik is entirely a domestic carrier with the exception of one international route to Singapore, which it launched in Aug-2015. Batik is planning to add more international destinations over the next year, including Seoul and Perth, but most of its expansion will be in the domestic market.

Batik Air launched services in May-2013 with an initial fleet of four 737-900s in two-class 180-seat configuration. Its initial expansion was relatively modest as it added only two 737-900s in 2H2013 and did not add any aircraft in the first seven months of 2014.

The 49 aircraft will make Batik the third largest Indonesian carrier after Lion Air and Garuda. Batik is currently the seventh largest airline in Indonesia based on fleet size, having just surpassed Indonesia AirAsia. By the end of 2016 Batik should overtake Sriwijaya Air, Lion Group regional subsidiary Wings Air, Garuda budget subsidiary Citilink and Susi Air. (Susi is an independent carrier that only operates very small aircraft.)

The 49 aircraft will also make Batik the eleventh largest in Southeast Asia, just behind Thai AirAsia (which plans to expand its fleet to 50 aircraft by the end of 2016).

Batik to expand operation at Halim

Batik currently operates about 140 daily flights to 22 destinations. Its current fleet of 30 aircraft are spread across three bases, including 25 at Jakarta Soekarno-Hatta, three at Jakarta Halim and two at Makassar.

Batik is planning to expand over the next few weeks its base at Halim to seven aircraft. Batik launched services at Halim in Apr-2015 and currently operates eight flights from Jakarta’s secondary airport. Capt Luthfie said Batik’s Halim operation will expand in the coming weeks to about 25 daily flights.

Batik is hoping to pursue further expansion at Halim in 2016 after the Lion Group completes a renovation of the passenger terminal. The new passenger terminal has been designed to handle about 12 million passengers per year and accommodate international flights.

Lion several years ago was awarded a concession to take over the operation of Halim’s terminal. After multiple delays it expects to receive final approvals within the next few weeks for the proposed upgrades and begin construction by the end of 2015. The project is expected to take about eight months to complete.

Halim is closer to central Jakarta than Soekarno-Hatta but has traditionally only been open to military and general aviation aircraft, including small air taxi operators. The Indonesian government initially opened up Halim in Jan-2014 to some commercial flights. Citilink was the first airline to begin operations at Halim and was the only carrier serving Halim for 15 months, when it was joined by Batik. As CAPA has previously highlighted, the Lion Group has long held ambitions to operate from Halim and after Batik was launched in 2013 it decided the airport was ideally suited for its new full-service brand.

Batik will continue to operate from Soekarno-Hatta as growth at Halim will still be limited even after the upgraded terminal opens because the airport’s only runway is controlled by the military. But Halim provides an alternative for expansion which is critical for Batik as the airline would otherwise not be able to pursue such rapid growth in the Jakarta market.

Batik only operates a small number of point to point routes bypassing Jakarta. It needs to continue relying heavily on the Jakarta market as it expands because Jakarta is by far the largest business market in Indonesia and its full-service product is not always suitable for routes connecting secondary cities.

Lion Group is now planning to build and operate a new airport in Lebak, located to the west of Jakarta, which should eventually give Batik and its other subsidiaries the infrastructure required to continue expanding in Indonesia’s main market over the long-term. Lion does not want to rely on the Indonesian government to resolve infrastructure constraints and is therefore investing in its own projects at Haim and Lebak.

Most of Batik’s expansion over the next 15 months will be in the domestic market, with a continued focus on the Jakarta market.

Batik sees opportunities to further expand its domestic network and build up its domestic market share before turning its attention to international expansion. Demand for domestic travel in Indonesia remains relatively robust, particularly at the top end of the market, while outbound international demand has been impacted by the depreciation of the rupiah.

Lion Group is using Batik to compete at the top end of the market, where Garuda has traditionally dominated and is still a much larger player. Garuda is on pace to carry about 20 million domestic passengers in 2015, giving it about a 24% share of the total market.

The Garuda Group has been gaining domestic market share as both its main full-service brand and Citilink have been expanding faster than the overall market. Garuda domestic passenger traffic was up 16% to 9.4 million in 1H2015 while Citilink traffic was up 32% to 4.3 million.

Garuda monthly domestic traffic exceeded 1.8 million passengers for the first time in Jul-2015 as Garuda recorded 30% year over year growth. Garuda carried 425,000 more passengers in Jul-2015 compared to Jul-2014. Batik is now carrying about 600,000 passengers per month, an indication Garuda on a passenger volume basis is growing as fast as its upstart competitor. 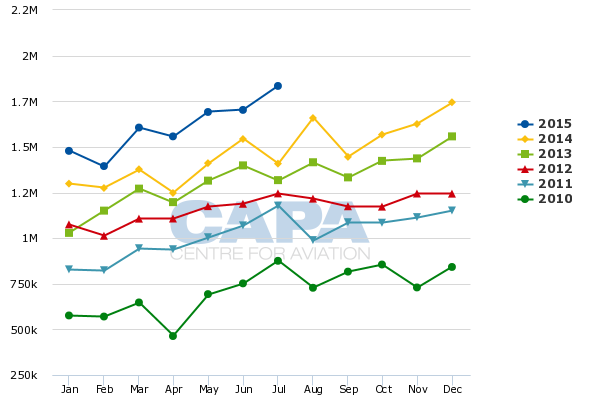 Growth at the main Lion Air operation has slowed significantly over the last year. Lion Air is adding only one narrowbody aircraft in 2015 compared to 15 for Batik.

Batik’s rapid expansion is therefore necessary for Lion Group to maintain its overall share of the market. Focusing expansion at Batik is sensible as Lion Air, along with low-cost regional subsidiary Wings Air, already gives the group a very strong position at the budget end of the market. Lion and Wings combined captured about a 48% share of the Indonesian domestic market in 2014.

There is now more opportunity for Lion Group at the top end of the market – both to gain market share and expand with the overall market. Batik should be able to continue to gain market share as it is still a small player compared to Garuda. The top end of the market also has been expanding faster than the budget end in part because of the new price floor regulations which came into effect in early 2015.

The price floors have mainly impacted LCCs, which are now unable to offer low promotional fares. The government assigns LCCs a lower price floor than FSCs but the difference is small. As the cheapest fares are now prohibited the average gap between LCC and FSC fares has narrowed, making the full-service product more attractive.

Capt Luthfie said Batik plans to soon add four more domestic destinations – Padang, Pontianak, Silangit and Sorong. Garuda currently serves all of these destinations except Silangit, which is a small city in northern Sumatra currently only served by Wings Air.

He said Batik already has decided on schedules to support its next 11 aircraft deliveries. Nearly all the additional flights will be in the domestic market.

Batik however is keen to add capacity to Singapore in the short to medium term and also launch two or three new international destinations.

Batik launched Singapore on 14-Aug-2015 with two daily A320 flights. Batik is aiming to upgrade Jakarta-Singapore to five daily flights in 2016 and will consider launching flights to Singapore from other Indonesian destinations such as Bali and Surabaya. But securing peak hour slots in Singapore, which Batik needs as Jakarta-Singapore is a popular business route, could prove challenging.

Lion already operates seven daily flights from Jakarta to Singapore. Batik believes it can grow in Singapore without impacting Lion as it caters to a different segment of the market. Lion also serves most of Batik’s domestic routes.

Seoul Incheon is the most likely next new destination and could be launched by early 2016. Batik is planning to link Seoul from Manado, a popular resort destination in central Indonesia where some of Lion Group’s owners have built hotels.

Batik also remains interested in the Australian market, where at one point it was considering establishing a local subsidiary. Batik is now looking at serving Perth using its existing Indonesian air operators’ certificate and is hoping to secure approval from Australian authorities in early 2016.

Batik is planning to serve Perth from both Jakarta and Bali. Bali-Perth is an extremely competitive market that Batik could struggle to compete in as it is primarily an inbound market served by LCCs with well established brands in the Australian market. AirAsia, Jetstar and from early 2016 Tigerair Australia (which will be taking over the Virgin Australia flight) serve Bali-Perth along with Garuda. 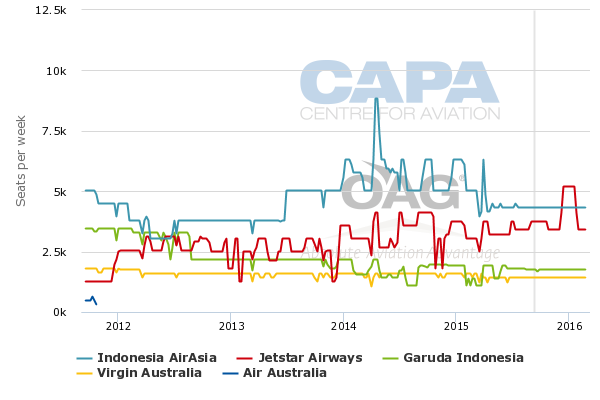 In addition Batik is looking at serving Shanghai, which could be served from Bali and or Balikipapan. Securing slots at Shanghai however could prove challenging.

Bali-Shanghai is a popular leisure route while Balikpapan-Shanghai has potential business demand, particularly from the oil and gas sector. Again Jakarta is not an option for Shanghai due to narrowbody aircraft range limitations.

Batik expects to pursue faster international expansion in 2017 after it takes delivery of its first A320neo. The airline is looking forward to the improved range of the A320neo and the 737 MAX, which Lion Group also has ordered, enabling longer medium-haul routes.

In about two years Batik also plans to relook at widebody aircraft, which will open up even longer routes. Lion Group previously planned to assign five 787-8s to Batik but decided in 2014 to cancel its 787 order.

At least for now the focus is on narrowbody aircraft and the domestic market. This is a sensible strategy given Batik is only a two year old carrier and the huge opportunities within Indonesia, which has the world’s fifth largest domestic market.

For Batik Air, international expansion will be more challenging

Domestic expansion is also less risky and much easier to implement. Given the rate Batik has added new aircraft it does need the distraction of international operations, which are inherently more complex.

Batik has added 24 aircraft over the last 13 months and needs time to digest the extremely rapid expansion of its fleet. Such a fast spool up is extremely difficult from a manpower recruitment and training standpoint and seems to have impacted average aircraft utilisation rates, which are currently about 10 hours per day.

Batik also does not yet have the brand or distribution channels to support international growth. Singapore is the most popular international destination for Indonesians, a segment Batik has focused on since entering the Singapore market. But most of its other potential international routes have limited outbound demand.

Lion Air also has a limited international network consisting of only four destinations. The Lion Group has aspirations for using Batik as its main brand for Indonesia’s promising international market.

But Batik could face challenges in establishing its brand overseas and securing the layers of approval required for each new international route. Quickly establishing a sizeable domestic presence is a noteworthy accomplishment but is a far easier task, particularly as Batik has been able to leverage the experience Lion has gained in becoming Indonesia’s largest domestic airline.