Northeast Asia is often thought of as a laggard for LCC development. After all, 11% of seats within the region are operated by LCCs compared with 56% in Southeast Asia and 40% in Western Europe. But attendees at CAPA's LCCs in North Asia summit at Tokyo Narita (7/8-Jun-2016) heard how these figures disguise significant inroads in certain markets: LCCs account for 40% of domestic Korea capacity, 38% of Japan-Korea and 30% of Taipei Taoyuan-Osaka Kansai.

CEOs from LCCs in Japan, Korea, mainland China, Hong Kong and Taiwan attested to their opportunities but also the challenges. Restrictive slots and traffic rights were a common theme and so too were protectionism, a slowly evolving regulator, and airspace constraints. Northeast Asian LCCs exclusively make up the U-Fly Alliance, while Northeast, Southeast and Australian LCCs are members of the Value Alliance. Southeast Asia is characterised by joint venture airlines operating with a single brand while Northeast Asia has more independent airlines.

LCCs account for 11% of seats within Northeast Asia, compared with 56% in Southeast Asia

It is true that LCCs account for 11% of available seats within Northeast Asia, according to OAG. This is a wide discrepancy from the 56% observed in Southeast Asia. Looking at other markets (Western Europe at 40%, North America at 32% and even the Middle East at 19%) indicates that Northeast Asia, on the whole, has not undergone the LCC revolution in the way that other markets have. An 11% LCC capacity share in Northeast Asia is slightly above Africa's 9%. 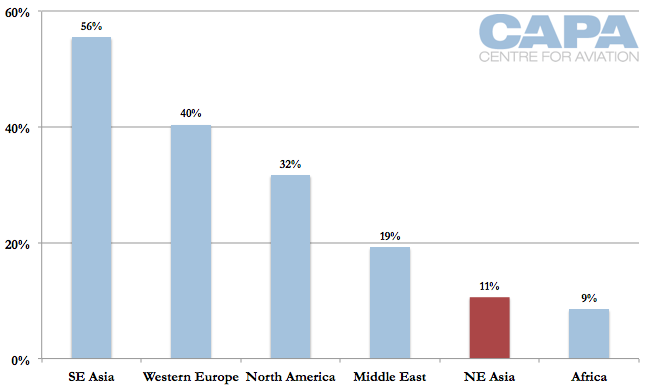 There are varying reasons for this, as attendees at the summit discussed. Northeast Asia's flag airlines have historically been stronger than their Southeast Asian counterparts; slots and traffic rights are more restrictive; protectionism is strong and LCCs developed more slowly in Northeast Asia – suggesting that it is still early days for them.

The 11% share of seats held by LCCs in Northeast Asia is superseded by the 17% share that LCCs have in Japan's domestic market – this achieved mostly since 2012 the launch of Peach, the first of a new wave of Japanese start-ups.

Korea's LCCs date back even further, and the LCCs account for 40% of the market, according to OAG data. This is closer – but still below – the high 50%, 60% LCC market share figures observed in Southeast Asia, where LCCs were prolific even before they launched in Korea. 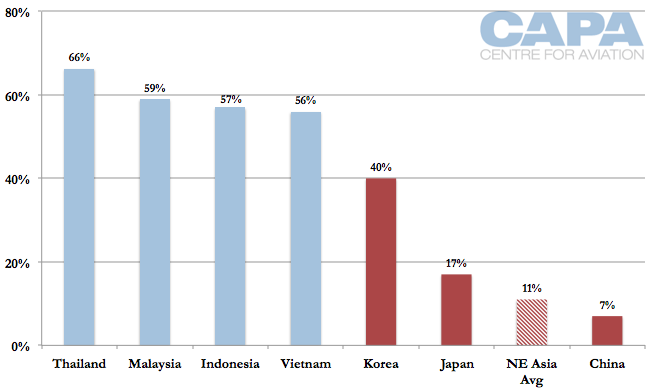 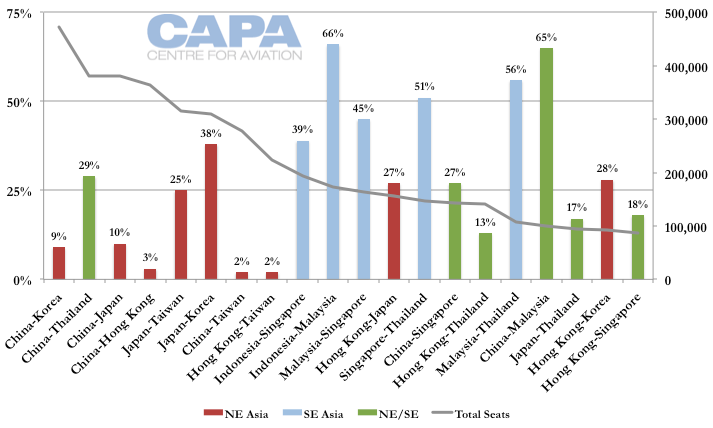 In the three largest Northeast Asian markets – China-Korea, China-Japan and China-Hong Kong – LCC penetration is below the 11% regional average. There are varying factors. The China-Korea figure is slightly belied by the exclusion of charter flights, which Korean LCCs operate.

Overall, the limited number of international/regional LCCs in mainland China holds back opportunities. For the LCCs that do compete in the market, protectionism is a factor: Spring Airlines has six aircraft parked at Airbus manufacturing plants awaiting Chinese approval for delivery. Some of the aircraft completed assembly in 2015. This is not the first time that China has delayed aircraft deliveries to private airlines (full service Juneyao Airlines is also awaiting delivery of new aircraft).

Tourism from China into Japan has significantly grown. Despite Japan having four LCCs – two of them dating back to 2012 – it was not until Spring Airlines Japan opened routes into China in early 2016 that Japan had local LCCs serve China. Slots, cost base and distribution networks are a concern for Japanese LCCs. Spring Airlines Japan benefits from its parent company Spring Travel's experience and network in China. AirAsia Japan may be able to leverage the group's extensive China experience.

LCCs are making significant gains in Northeast Asia, where they are allowed to

Two markets with limited interference are Japan-Taiwan and Japan-Hong Kong. Air traffic rights are not an issue and regulators do not intervene. Slots are a challenge depending on the Japanese airport; they are a hurdle in Taipei Taoyuan while there are runway works; and they are significantly limited in Hong Kong. Japan-Taiwan has fewer obstacles than Japan-Hong Kong, but compared with other markets (traffic rights restrictions in Korea-China, opaque procedures in mainland China), these two markets begin to reflect the opportunity for LCCs in Northeast Asia when they are allowed to expand with limited impediments.

On the two largest airport pairs between Japan and Taiwan, LCCs account for approximately 30% of seat capacity. Most of the gains have been in the last two years with the launch of Taiwan's first LCCs – Tigerair Taiwan and V Air. Notable LCC gains are being made in smaller Japan-Taiwan markets, despite LCCs so far concentrating mostly on trunk routes. In the Hong Kong-Japan market, similarly to Taiwan-Japan, the two largest trunk routes (by far), LCCS account for a quarter to a third of the available seat capacity. In smaller markets, LCCs have a higher share of seat capacity – or are the only providers. 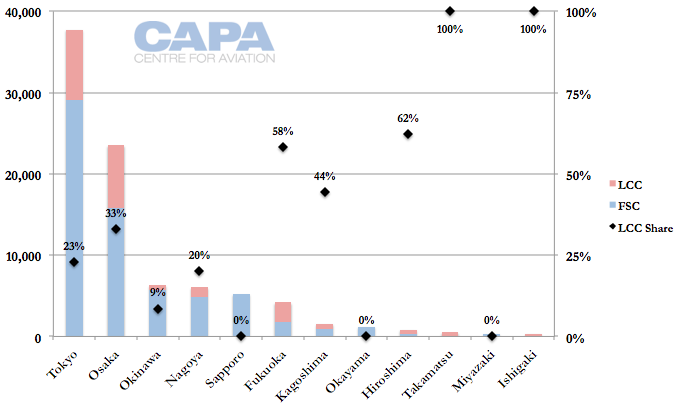 Northeast Asian LCCs are developing on a different time frame

It is true that LCCs in Northeast Asia could up the adrenaline – sometimes on their prerogative, often held back by external factors. It might also be asked how much of the status quo is reflective of Northeast Asian LCCs launching and growing later than their counterparts in Southeast Asia and other regions.

Southeast Asia's third largest international route in 2016 is between Kuala Lumpur and Singapore. LCCs started on the route only in 2008, after a protracted aeropolitical challenge. The route catapulted to be the largest in the region before there was rationalisation. This sudden growth is a lesson on what can occur in Northeast Asia when handcuffs – traffic rights, slots, other factors – are removed.

For some airlines, this is a note of optimism. For others, such sudden, market-changing growth is a threat. Such compressed LCC activity may not allow incumbents to develop and execute a response. 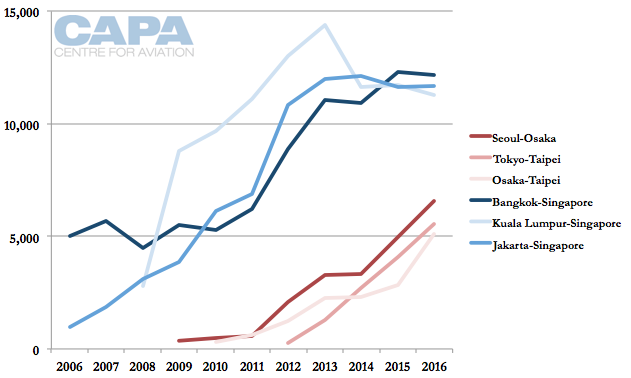 There are significant Northeast Asian markets outside mainland China that LCCs can shape their business around. But for Northeast Asia to have an LCC penetration rate similar to other markets overall, significant inroads will need to be made in domestic markets – such as Japan, but mainly China.

Under a series of what-if scenarios calculated by CAPA, if the Hong Kong-Taiwan LCC market were to be 20% instead of 2% the total Northeast Asian LCC penetration rate would increase by only 1ppt to 12%. A 20% LCC rate is far-fetched, given the restricted traffic rights and improbability of an existing airline converting some of its capacity in the market to a low cost platform.

Likewise, if the China-Korea market grew from LCCs having 9% to 40% the total Northeast Asian LCC penetration rate would also grow only 1ppt. Such an achievement comes into focus once the Korea-China air service agreement is liberalised.

It is the large domestic markets that define any top-level statistics. LCCs account for 17% of the Japanese domestic market, and were their share to double to 30%, Northeast Asia's LCC penetration rate would grow from the present 11% to 19% under such a what-if scenario. If the same 30% were to be achieved in the domestic China market (currently 7%), Northeast Asia's total market about a quarter – 24% – of seats would be flown by LCCs.

Growth in other market pairs in Northeast Asia can add up, but significant region-wide improvements will not arrive until there is growth in mainland China. It should be cautioned, of course, that a single top-level statistic does not represent what is in fact a region with many sub-regions.

Even for LCCs that have mainland China as a small play (Tigerair Taiwan), or do not serve it at all (Vanilla Air), the growth opportunities are irresistible. This is true of global markets actively courting Chinese visitors, but it is especially relevant in Northeast Asia, which accounts for four of the five largest outbound markets Chinese reach by air.

There is a significant drop between the five largest markets (the largest, Thailand, is outside Northeast Asia) and the next cohort. 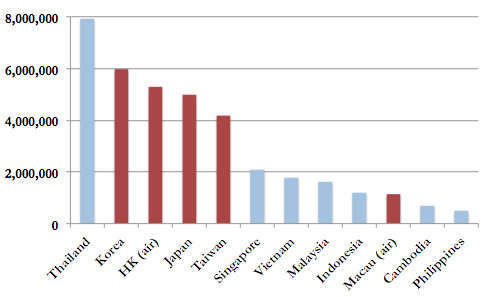 Singapore is an example of the opportunity to grow in China through LCCs. In 2006 the Singapore Airlines and Cathay Pacific Groups each had 13 destinations in mainland China. Cathay quickly overtook SIA and held its position until 2014, when SIA – armed with a growing Tigerair and the start-up Scoot – surpassed Cathay for number of destinations served in mainland China.

(SIA Group's destinations includes the cities near Hong Kong: Shenzhen, which Cathay does not serve, and Guangzhou, which Cathay Dragon does serve.) 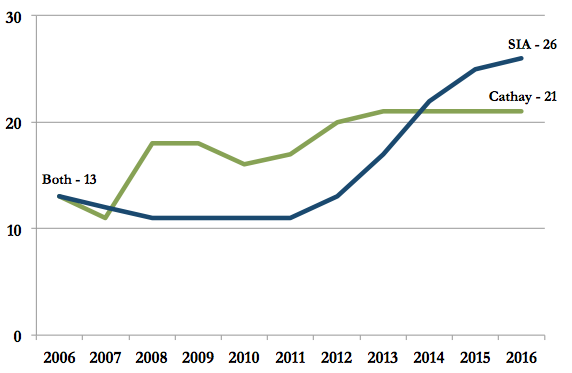 In 2016 the SIA Group will serve 26 mainland Chinese destinations compared with Cathay's 21.

The growth is entirely due to LCCs in the SIA Group. There may be market nuances that make the comparison invalid – but it could show the opportunity for groups elsewhere to leverage LCCs to prepare for the China growth that is yet to occur. 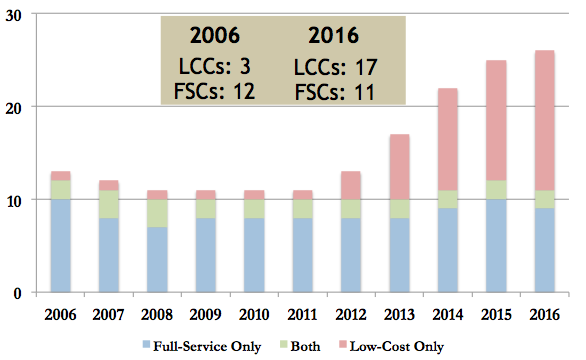 Northeast Asian LCCs are still in the early phases of growth. Besides tackling restraints to growth they must increasingly factor in competitive responses from full service airlines. A few responses so far have been: limited low-price ticket sales, Xiamen Airlines' all-economy aircraft and China Airlines introducing a fare option without checked luggage.

At the very least, the responses indicate that full service airlines are acknowledging the new customer base that low cost airlines are targeting, or are able to provide better – irresistible – value to.

The Northeast Asian market is becoming more dynamic. But there is the potential for significant growth and complexity..

Analysis and videos from CAPA's LCCs in North Asia Summit will be posted shortly and available on CAPA TV at centreforaviation.tv.

CAPA's next event is the Australia Pacific Summit in Brisbane 4/5-Aug-2016.
CAPA returns to Asia for the Asia Aviation Summit in Singapore 15/16-Nov-2016.