The Hong Kong-Japan market will be 16% larger in Mar-2015 than a year prior. The market had experienced relatively flat performance earlier this decade, but a series of factors is changing the market. Japanese tourists to Hong Kong long outnumbered Hong Kong visitors to Japan, but the weakening yen is allowing Hong Kong visitors to Japan catch up to Japanese visitors to Hong Kong. The Hong Kong to Japan market has a leisure orientation, and fares are often lower than those ex-Japan. Growing LCCs can help meet Hong Kong demand and rejuvenate the Japanese market. LCCs are projected to comprise 19% of the Japan-Hong Kong in Mar-2015.

LCC penetration will reach 20% on the largest route between the two, Hong Kong-Tokyo, as Part 1 of this report outlined. This second part looks at the LCC presence in other Japanese markets, growth prospects and challenges. For Hong Kong-Fukuoka, 42% of seats will be provided by LCCs, while for Hong Kong-Osaka 30% of seats provided by LCCs. These are only a few routes and still modest shares compared to other regions, but growth opportunities may be capped by constrained slot availability.

Hong Kong tourism to Japan is growing, but Japan to Hong Kong is declining

This is largely driven by the Japanese yen's depreciation against the US dollar. The Hong Kong dollar is pegged to the US dollar. 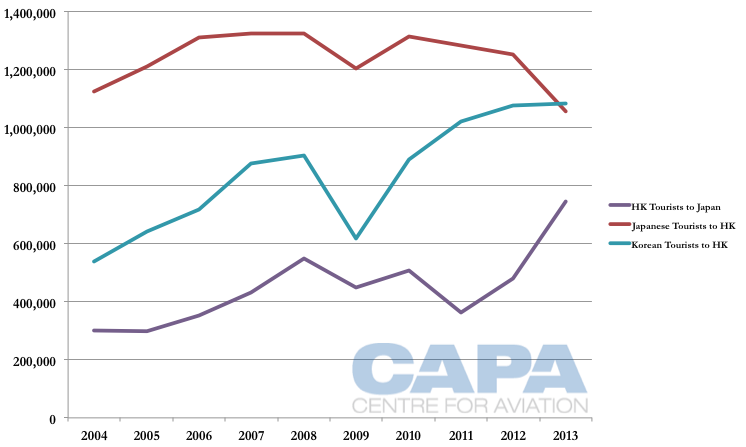 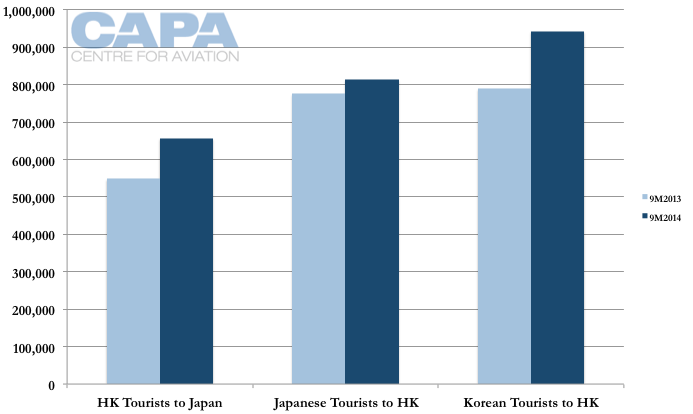 The Hong Kong-Japan market was once clearly weighted on the side of Japanese outbound traffic, but this gap is now quickly narrowing. It is no longer improbable that Hong Kong visitors to Japan could outnumber Japanese visitors to Hong Kong.

A comparison with Korea is worthwhile as LCCs have been present there since the last decade whereas Japan received its first LCC in 2012, and Hong Kong in 2013. LCCs have operated on the Hong Kong-Seoul market for longer, and in Mar-2015 are projected to account for 20% of the market, based on Nov-2014 OAG schedules.

The true figure will likely be higher as Korean LCC Jin Air plans to up-gauge its service from 737-800 to high-density 777-200. Further, the 20% figure is partially distorted by fifth freedom capacity offered by Ethiopian Airlines and Air India between Hong Kong and Seoul. These flights can offer fares comparable to or even lower than LCCs, effectively making their presence akin to that of a LCC.

While the growth in Hong Kong visitors to Japan is offsetting the decline in Japanese visitors to Hong Kong, the revenue impact is not the same. Ex-Japan bookings are often sold at a significant premium to Japanese inbound flights sold elsewhere. A leisure economy ticket sold from Japan would have often carried a rich yield, but now ticket prices ex-Hong Kong are lower. At the same time as Japan became more affordable for more cost-conscious Hong Kong visitors, and Japanese visitors to Hong Kong faced higher costs, there has been the introduction of low-cost flights.

The first Japan-Hong Kong low-cost flights were offered by Peach in Jul-2012. Peach had an initial 2.6% market share. HK Express re-entered as a LCC in Dec-2013, and Vanilla Air entered in Nov-2014. They have grown the market rather than re-arrange existing marketshare. 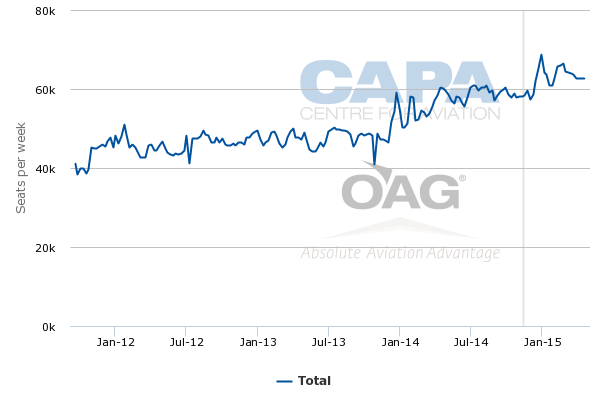 CAPA previously looked at the growth between Hong Kong and Tokyo, one of the largest international routes within Asia. But growth between Hong Kong and Japan is occurring in other markets as well. Hong Kong sees service from seven Japanese cities. This is more than Southeast Asian hubs (which are further from Japan) but less than North Asian hubs that are closer to Japan. Taipei for example sees service to 17 Japanese cities, and Seoul is over two dozen – although Seoul also uses Japanese routes to feed sixth-freedom traffic.

Taiwan's traffic flows to and from Japan are large, partially from historical and cultural tie,s whereas Korea and mainland China are closer to Japan with flight times around two or three hours on many city-pairs. This places almost all of Japan within narrowbody range from Korea and mainland China. From Hong Kong, Hokkaido cannot be served with narrowbody aircraft without restrictions.

With Hong Kong having a wider range of Japanese cities to visit, it follows that Hong Kong visitors to Japan visit a number of different parts of the country and not just Tokyo. A 2013 presentation of Japanese tourism data from 2011 showed that Hong Kong visitors were as likely to visit Osaka, Hokkaido and sometimes Okinawa as they were inclined to visit Tokyo. But for Singaporean visitors to Japan, Tokyo is the more defining destination.

The relationship between visitor destination and airline routes is difficult to define: new routes or increased capacity bring tourists to those regions, but at the same time some tourists seek out destinations and the airline capacity later flows. For example, the Japanese study found as many Hong Kong visitors to Hokkaido as to Osaka even though the number of flights between Hong Kong and Sapporo in Hokkaido is a fraction of those to Osaka.

(The study did not weigh the destinations by number of nights spent. This data sample is likely distorted by the influx of visitors to Hokkaido over winter.)

LCCs are becoming a key factor in Japan's tourism growth, projected to comprise about 19% of the Hong Kong-Japan market in Mar-2015. Tokyo and Nagoya see just above average LCC rates at 20% while Osaka sees a LCC rate of 30% and Fukuoka 42%. This is consistent with LCCs making larger impacts in secondary markets. Japanese data identified that 95% of Hong Kong visitors to Japan in 2013 were there for tourism. The combination of a leisure orientation combined with increasing number of lower yielding ex-Hong Kong fares and a decrease in higher-yielding ex-Japan fares gives a a bright outlook to LCC growth.

The two Japanese LCCs, Peach and Vanilla, serve Hong Kong only from their respective bases in Osaka and Tokyo. Peach has mooted growth in international services from its secondary hub in Okinawa, but this been postponed as the airline and airport negotiate over facilities.

HK Express is delivering an indirect growth contribution as its presence drives other airlines to expand. ANA as previously mentioned is adding Hong Kong-Tokyo capacity to preserve its market share (this is in addition to growth from Vanilla Air, which ANA wholly owns). In Fukuoka, Dragonair expanded capacity just ahead of HK Express' entry despite a long period of flat capacity. 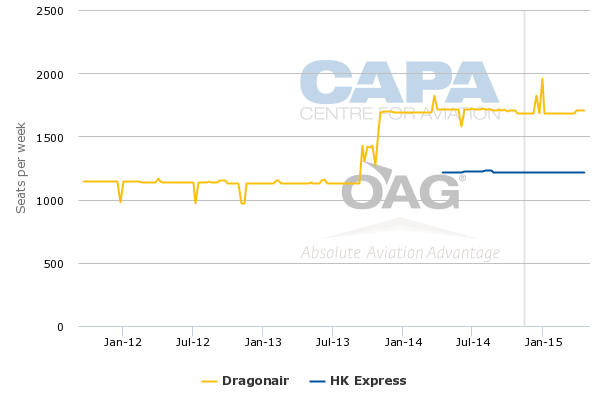 More LCC growth can be expected between Japan and Hong Kong. Looking at the existing routes that do not yet have an LCC presence, Sapporo as mentioned cannot be served by narrowbody aircraft without payload restrictions. HK Express full service sister carrier, Hong Kong Airlines, will operate to Sapporo from 19-Dec-2014 using widebody A330s. Okinawa and Kagoshima can be operated with narrowbody aircraft from Hong Kong, but Hong Kong Airlines serves these destinations, Okinawa with A330s and Kagoshima with A320s.

As HK Express migrates to its new Navitaire platform, it will be able to sell multi-city destinations, allowing passengers to fly into one Japanese airport and out of a another. But HK Express will not sell Okinawa or Sapporo despite the obvious interest in passengers visiting there in addition to a major city. (HK Express will also not sell Hong Kong Airlines' Kagoshima service.) This highlights some of the need for better coordination and the existing unclear dual-brand group strategy around Hong Kong Airlines and HK Express. HK Express is beginning to maximise the number of Japanese destinations that can be served from Hong Kong.

Vanilla Air seems content to focus on its Tokyo base and is more likely to add other international destinations from Tokyo before finding a secondary Japanese base. Even Peach's foray to a second base at Okinawa has been a slow development. Demand remains strong at Osaka and Tokyo, and the two LCCs are taking a conservative growth approach. Growth has become even more conservative with the pilot shortage in Japan. Also, Peach and Vanilla do not offer connecting flights that could link their domestic networks to international destinations.

But Hong Kong's infrastructure and mindset are challenging

The largest constraint is the slot shortage at Hong Kong. This has been further aggravated by the recent moratorium on additional overnight slot usage, times that are ideal for LCCs as it boosts utilisation rates, thereby driving down costs and stimulating growth. The duration of this moratorium is unclear. It could be temporary as the airport tries to appease the community in advance of a contentious third runway addition.

Alternatively, it could be long-lasting. Certainly Cathay Pacific, with its mighty influence, will not be concerned about the moratorium, as it limits growth from others in the otherwise densely packed slot availability. Another challenge is Hong Kong's mindset to work with LCCs to drive down costs and increase passenger numbers.

LCCs have demonstrated they can bring tangible gains, not only growing the market themselves but forcing full-service airlines to grow as well. Yet Hong Kong airport has yet to embrace this growing segment. This is in stark comparison to other airports and governments in the region, not to mention mainland China, which last year formally rolled out the welcome mat to LCCs.

Japan in 2013 for the first time achieved 10 million visitors, and ambitiously wants to double this figure to 20 million by 2020. Japan's eagerness – and incentives – combined with Asia's other growing hub airports and airlines means the traffic Hong Kong leaves behind, will not be simply ignored but rather taken up by competitors. Japanese tourism to Hong Kong is in need of rejuvenation, not handicapping.