A year into their historic merger LAN and TAM – now LATAM Airlines Group – are continuing a network optimisation concentrated largely in its Brazilian domestic operations; but tweaks are also occurring in its international services as the company works within the dedicated LATAM operations and with its oneworld partners on network optimisation. At the same time the scale created by the tie-up is allowing LATAM to shed older, less fuel efficient widebodies from the combined fleet.

One subtle shift in LATAM’s North American operations is the ending of a four year stint on flights between its Lima hub and San Francisco in Mar-2014.  The move appears to be less about weak performance on the route and more geared towards freeing up some widebodies for operation by TAM as well as perhaps coordinating more closely with LATAM’s oneworld partner American in Los Angeles, which is introducing new service from Los Angeles to Sao Paulo in Nov-2013.

LAN Peru’s performance on flights between Lima and San Francisco seems steady as data from the US Department of Transportation show the carrier achieved an approximate 84% load factor on the flights (operated with 221-seat Boeing 767-300s) during 2012. Schedules in Innovata show that one-way weekly seats spiked to about 2,200 at the end of Sep-2012, and then decreased to steady state of approximately 660 one-way week seats. San Francisco seems like a disconnect as LATAM heightens coordination with American. 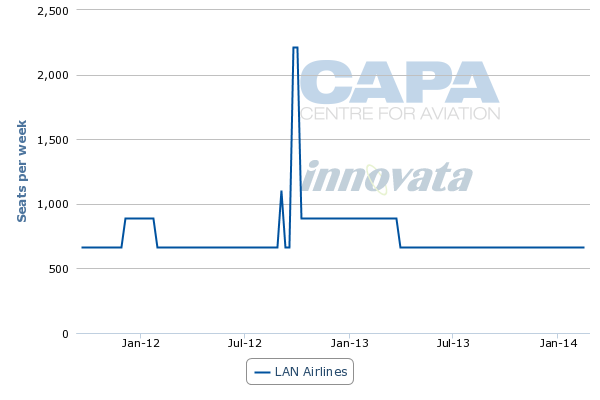 But as LATAM works to maximise the combined networks of LAN and TAM and optimise its schedules with oneworld partner American, San Francisco seems somewhat of an anomaly given that it is a major hub for Star anchor member United Airlines. Based on current schedules from Innovata (2-Sep-2013 to 8-Sep-2013), oneworld accounts for about 9% of the one-ways seats on offer from San Francisco International Airport compared with 55% for Star. Given those statistics, LATAM’s onward connecting opportunities from San Francisco were somewhat limited. 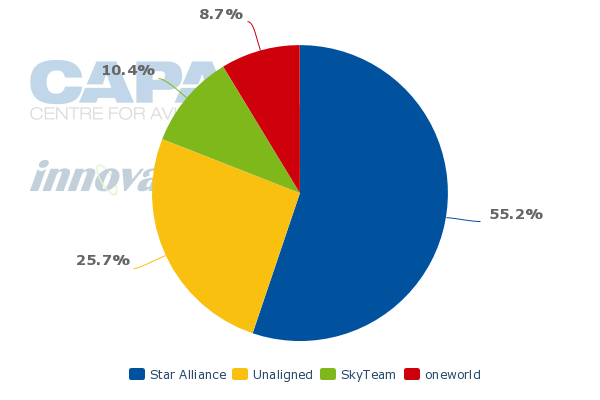 As it works to wind down its service between Lima and San Francisco, LATAM is increasing its frequencies from Lima to Los Angeles to 14 weekly with its new Boeing 787 widebodies operated by LAN. Presently LAN operates 787s and 767s between Los Angeles and Lima, and the 787 flights continue onto Santiago.

As its stands the axing of service from Lima to San Francisco will do little to diminish LATAM’s strong presence in Lima, which the carrier has stated is an important transit point in north-south traffic. LATAM through LAN accounts for roughly 56% of the seats on offer from Lima Jorge Chavez International Airport, which naturally gives oneworld a commanding 59% seat share among the major alliances at the airport. The oneworld partners will still serve the major US gateways of Los Angeles, Miami, Dallas and New York JFK, supplying feed to LAN’s routes in Chile, Argentina, Brazil and Ecuador. Delta also serves Lima from its Atlanta hub and United from its fortress in Houston. 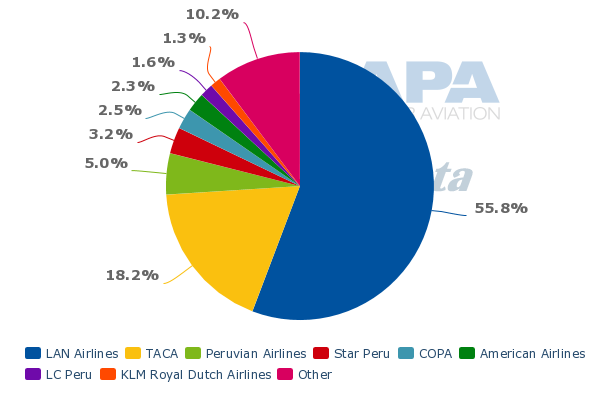 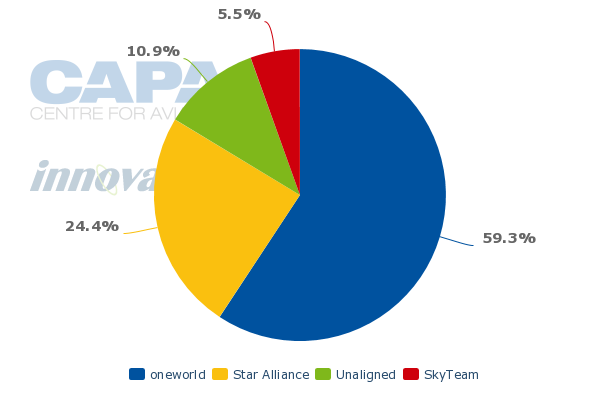 Presently, LAN’s three weekly flights from San Francisco to Lima continues onto Sao Paulo. But given American’s impending launch of service between Los Angeles and Sao Paulo, it makes some of the flying from the US west coast through Lima a bit redundant. American operates service from Los Angeles to San Francisco, which makes connections onward to SFO from Lima and Sao Paulo reasonable.

American’s new service from Los Angeles to Sao Paulo should by buoyed by the recent launch of a codeshare with TAM, which is expected to improve LATAM’s Brazilian operations as TAM can now leverage American’s overall stronger presence between the US and Latin America versus its Star partner United. The partnership neatly ties together TAM’s service from its Sao Paulo hub to American’s hubs in Miami and New York (also served by TAM) rather than Houston and Chicago, which are hubs of United, but not served by TAM from Brazil.

The 767 used on the Lima-San Francisco flights could presumably be replacing A330s as LATAM is in the midst of shedding the 10 oldest  A330s in the legacy TAM fleet and replacing those aircraft with Boeing 767-300s on long-haul flights. Unlike the A330s, the 767s feature lie-flat seats in business class, which will put LATAM on a competitive footing with the majority of its competitors with respect to product offering. Perhaps even more important is the 767s have a lower unit costs than the older Airbus models.

The replacement of TAM’s oldest A330 widebodies is occurring in parallel with LATAM consolidating most of its European long-haul operations at Sao Paulo Guarulhos. During Aug-2013 TAM cut service from Rio de Janeiro (Galeo International) to Frankfurt and Paris, which now only leaves London Heathrow as the sole European route LATAM operates from Galeo. In Aug-2013 the A330 on that route was replaced with a Boeing 767-300. TAM’s competitor (and soon to be fellow oneworld partner in 2014) on the pairing, British Airways, operates 777s with lie-flat seats.

While the European economy is showing faint signs of recovery, Brazil’s overall economy remains somewhat depressed as inflation has been rising and doubts are growing if the country will achieve projected 2.5% GDP growth during 2013.

With relatively unstable economies in Brazil and Europe, it makes sense to consolidate long-haul European operations in Sao Paulo, which is 429km from Rio. One of Brazil’s busiest routes is between Rio Galeo and Guarulhos, which features about 18,000 one-way weekly seats. With a flight time of just approximately one hour, it is not a huge inconvenience for passengers to connect to long-haul flights in Sao Paulo.

As some of the tweaks LATAM is making to Brazilian domestic operations and in its international network take effect, on a system-wide basis the company expects flat to 2% capacity growth for 2013. Supply in its international markets is projected to grow 2% to 4% year-on-year during 2013.

Amidst its network optimisation efforts and the disposing of 10 A330 widebodies, LATAM has also adjusted its fleet plan in order to de-lever its balance sheet. Between 2013 and 2015 it has cut previously projected aircraft deliveries by 22 aircraft – 21 narrowbodies and a single widebody. The re-working of its aircraft commitments should results in a USD1 billion reduction in financing that would have been necessary to support those deliveries. 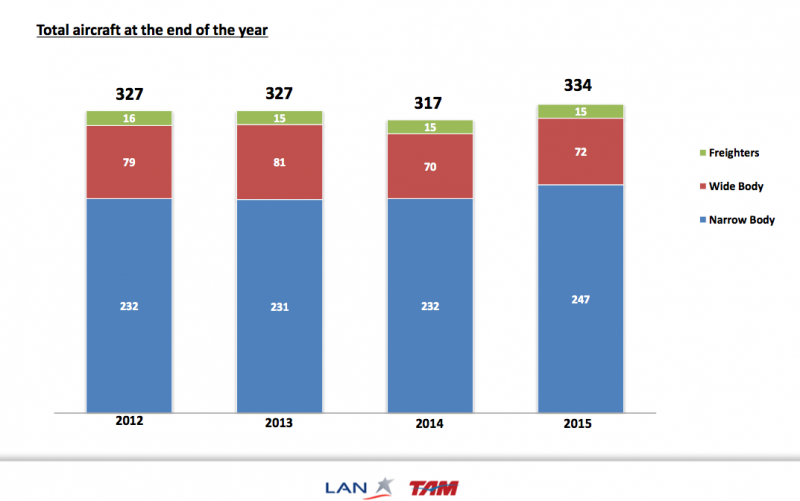 One of the sacrifices LAN has made in merging with TAM is losing the long-held investment grade status it retained for many years prior to the merger. Roughly a year ago in Aug-2012 LATAM executives told Bloomberg they expected the company to return to investment grade during 2013, but it looks as if those expectations have been tempered as conditions in Brazil remain weak and depreciation of Brazil’s currency has continued to plague the country’s largest carriers TAM and Gol.

While the efforts LATAM has made in improving its Brazilian operations are bearing some fruit (evidenced by 14% increase in unit revenues on Brazilian domestic markets), it seems the challenges in Brazil dragging down its performance could continue to be an overhang in the short term.

Despite those problems LATAM believes the rationale in merging remains intact and still forecasts achieving USD600 million to USD700 million in three years during 2016. However, achieving the rare feat of investment grade status in the airline industry could take a bit longer.