Despite the impatience of Wall Street that wants it to offer up a more dramatic strategy than its Cornerstone plan, American Airlines has received yet another endorsement of its Flight Plan 2020. However, key to its success, according to Airlinefinancials.com is massive change in labour-management relations. Without that, said Founder Bob Herbst, American will not be able to compete.

Responding to previous articles CAPA has run about American, the airline was anxious to explain that while it has downsized San Juan as a hub, it remains a focus city with 66 flights compared to 100 in the Spring of 2008 after which capacity cuts were imposed throughout the industry. American maintains 25 mainline flights at San Juan while American Eagle has 41, according to the airline. Service there also includes connecting traffic, as well as service from all its Cornerstone markets – New York, Chicago, Miami, Dallas and Los Angeles as well as direct flights from Boston and Philadelphia. “San Juan and the Caribbean markets are still very important to our network,” said Spokesperson Andrea Huguely. “As you can see, we chose to build back after the initial cuts we made in 2008.”

Herbst laid out all the challenges before American as it navigates its way through the changed US airline landscape becoming much less competitive in the face of Delta and United-Continental. He essentially is agreeing with MIT Research Engineer Bill Swelbar in assuming that American’s upcoming joint ventures with British Airways/Iberia and Japan Airlines, coupled with its Cornerstone strategy will position the Dallas-based carrier well.

“AirlineFinancials.com believes American Airline's strong global network combined with the upcoming joint business venture with British Airways/Iberia and Japan Airlines will allow American to be revenue-competitive with Delta and the merged United-Continental,” said Herbst in his latest analysis. “Accepting the above, American Airline's single largest obstacle to long-term success – profits and growth – is finding a solution which resolves their decades of contentious and on-going battles between labour and management. For American Airlines, without a deliberate change from both management and labour to work together, it is unlikely they will be competitive with Delta and the new merged United-Continental.”

Major challenges for American include the fact that in a relatively short time period, American saw four smaller and, arguably, mostly weaker, competitors join forces to become much larger and stronger. It competes with Delta and/or United-Continental on nearly every city-pair. In addition, the two merged entities will serve many more domestic and international destinations than American.

Pointing out that domestic feed is the life blood of global operations, Herbst noted that United and Delta have significantly less restrictive labour contracts than American. 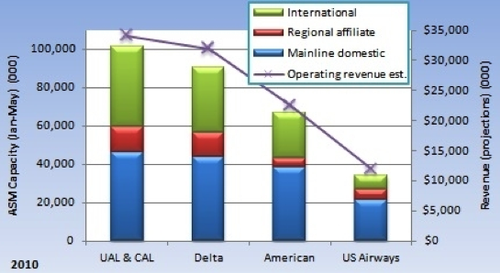 “Approximately 50% of Delta and United-Continental's mainline capacity is international compared to approximately 38% for American,” said Herbst. “As a result of labour contract restrictions, American receives less than 11% of their domestic capacity and passengers feed from regional/affiliates while United and Delta achieve approximately 23%. 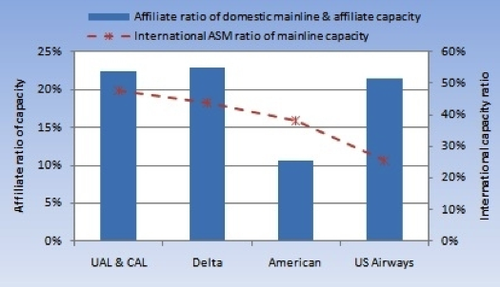 From the October 2008 merger of Delta and Northwest to the end of 2009, American went from the largest airline to being a much smaller competitor to Delta. 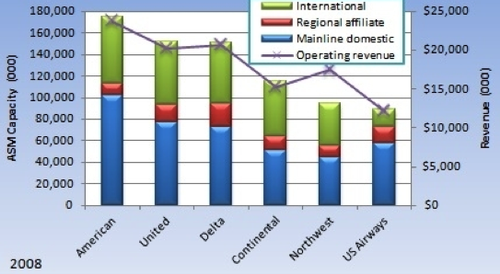 After many years of failing to find a partner, United found Continental in early 2010 willing to say yes. Subject to the expected DOT, DOJ, and stockholder approval, United and Continental will merge by the end of this year. 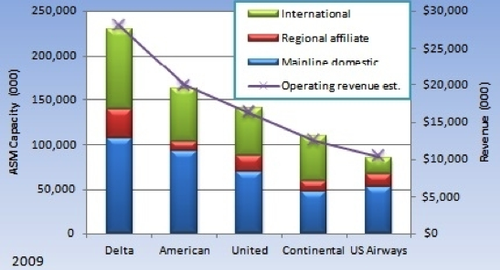 Herbst said the US airline industry is now making historical changes with both Delta and United-Continental mergers being the adaptations necessary to cope with today’s environment. “More importantly,” he said, “both Delta and Continental management and their labour groups have a history of working together to find solutions to their problems.”

However, he was decidedly opposed to a much-talked-about merger between American and US Airways. “It is the opinion of AirlineFinancials.com that pursuing a merger with US Airways is not in the best, long-term interest of American Airlines,” said Herbst. “Furthermore, it is our opinion that American's plan to pursue stronger global alliances plus their announced ‘Cornerstone’ focus is the best, long-term strategy for American to compete against the new Delta and merging United-Continental.”

Herbst noted that US legacies have not been competing to make profits but only for cash flow necessary for survival, predicting the Delta and then the United-Continental merger will “be a major step to improving the US airline industry. “In order to have a safe, efficient and financially solvent airline industry, politicians, the media, and consumers must accept the [airline] industry cannot -profitably-- support too many airlines competing for the same customer. It is long past time the focus is turned toward making the airline industry better opposed to just making it cheaper.”

Herbst cited the fact that that in 20 months American has gone from the largest airline in the world competing against five smaller and arguably weaker US legacy carriers, to number three should the United-Continental merger be approved. In October 2008, Delta and Northwest merged taking the number one spot in the industry. By the end of this year, United and Continental will merge pushing Delta/Northwest to the number two position. American will soon become the third largest airline leaving US Airways as the only remaining smaller legacy competitor.” Actually, Alaska is also considered a legacy carrier.

He criticized those who think that all airlines have to take on the Southwest business model. “Airlines can be different and do not have to do that to be profitable,” he said. “Similar to purchasing clothing at Walmart and/or Macy's, which are very different stores, the airline industry is made up of different types of airlines. While all airlines sell ‘air travel,’ large legacy/global carriers provide a different consumer product than the lower-cost, primarily domestic airlines. One of the major differences between the legacy/network airlines and the lower cost domestic carriers is the passenger ‘feed’ that is required to support the legacy airline's large international operations. In 2008, American had the largest route network connecting passengers from domestic cities to their major international hubs.”

Herbst likened American’s strategy to the game of Risk. “With that, you have a realistic idea of what American's ‘Cornerstone’ focus will look like as American builds up and defends their five largest domestic and international hubs,” he said, adding that none of the legacies have any plans for adding measurable capacity before 2011. “This past April, American started changing its system schedule to build up each of their announced ‘Cornerstone’ focus cities. A recent agreement with JetBlue will give American additional takeoff/landing slots for JFK and allow American to provide up to 18 new connecting destinations from/to JFK and BOS. The additional build-up in these focus cities should further solidify American's already strong position.” 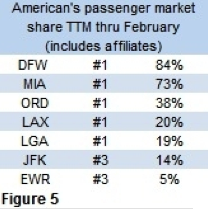 American's impressive rank and market share over the past 12 months at each of their ‘Cornerstone’ airports – before – its announced buildup. Excluding LGA, which is primarily a domestic airport and EWR which is all but owned by Continental, American currently has the highest market share and offers numerous international destinations to/from each of their announced focus cities. Additional destinations around the world are available through American's alliance partners.