As part of the ongoing privatisation of Japanese airports, a consortium comprising a cross-section of Japanese commerce and industry has just signed an agreement for the private operation of the Kumamoto Airport under concession.

The consortium includes Japan’s two main airlines. Japan Airlines (JAL) and ANA Holdings announced that the consortium had signed a basic agreement with Japan's Ministry of Land, Infrastructure, Transport and Tourism (MLITT) under the terms of a 33-year concession contract.

As in Brazil, but at a time when Japan’s airports for the most part are not being privatised in blocks, a number of smaller airports are coming to the market. Although on the surface they may not appear to have much to offer to investors, Japanese firms at least are keen on taking them on.

Japan Airlines (JAL) and ANA Holdings announced that the MSJA-Kumamoto consortium had signed a basic agreement with Japan's Ministry of Land, Infrastructure, Transport and Tourism (MLITT) for the private operation of Kumamoto Airport under the terms of a 33-year concession contract. JAL and ANA are two of 11 participants in the consortium, which plans to establish a special purpose vehicle to operate the airport by 01-Apr-2020.

A handful of consortium members have airport operating experience

All the participating companies are Japanese and some, such as Sojitz Corporation, have previous experience in the sector, although in that particular case the experience is outside Japan.

It is not unusual in Japan for companies from other sectors, notably power and utilities, to take small stakes in the airport privatisation process. Additionally, in this case there is a local broadcasting company – Kumamoto Telecasting Co, Ltd.

The most experienced operator among the group is Japan Airport Terminal. Listed on the Tokyo Stock Exchange, it is the operator of Tokyo Haneda Airport.

No foreign investors in the group

There may be some disappointment within MLITT that there are no foreign companies in the mix. For some time it has been MLITT’s intention to attract them – mainly as investors rather than operators. While MLITT has had some successes, foreign representation in the entire airport privatisation process still lags.

The inclusion of the two airlines, ANA and JAL, should not be any surprise. Both have demonstrated an interest in the privatisation process before.

In the case of ANA, as long ago as 2014 it formed a consortium with three other companies, including Japan Airport Terminal, to bid in the privatisation of Sendai Airport. Then, in 2017, ANA Holdings and Japan Airlines were reported to be taking part in a joint capital investment programme into a new company to manage Fukuoka Airport when it was privatised.

The CAPA Global Airport Investors Database lists some 40 airlines worldwide that are investors in airports, or have been, or aspire to be, including the likes of Lufthansa.

A long concession for an airport that was earthquake-damaged

Kumamoto is not the biggest, or by any measure the most attractive, airport to have been offered for concession in Japan. It was placed under government administration in Apr-2016 following a major earthquake, which damaged its terminal buildings.

Interested operators had the opportunity to bid for a 48-year concession contract for the airport (33 years plus an extendable extra 15 years), with the option to extend for a further 10 years in the event of an unexpected natural disaster (an unusual but customised way of advertising a concession).

Demolishing and rebuilding the terminal building damaged in the 2016 earthquake within three years was a requirement of the concession contract, as are improving passenger services and attracting LCCs.  All the same, approximately 120 companies attended the initial seminar in Aug-2017 for organisations interested in participating in the tender process.

The business states that it will prioritise safe and reliable airport operations while aiming to contribute to the region’s continued recovery from the 2016 Kumamoto earthquakes.

The consortium hopes to increase traffic through Kumamoto and reinvigorate both the airport and surrounding environs by using the Kumamoto Airport’s geographical advantages – that is, its proximity to the rest of East Asia – and the prefecture’s abundant tourist draws, such as the Aso and Amakusa areas.

Airport characteristics: what sort of airport the consortium has taken on

Kumamoto city and airport are on the island of Kyushu, in the far southwest of Japan. Although there are other airports in the vicinity that have either been privatised (Fukuoka) or are on the privatisation list (Nagasaki), the region is at the other end of the country from where much of the privatisation activity is at present – the seven airports on Hokkaido Island in the far northeast. 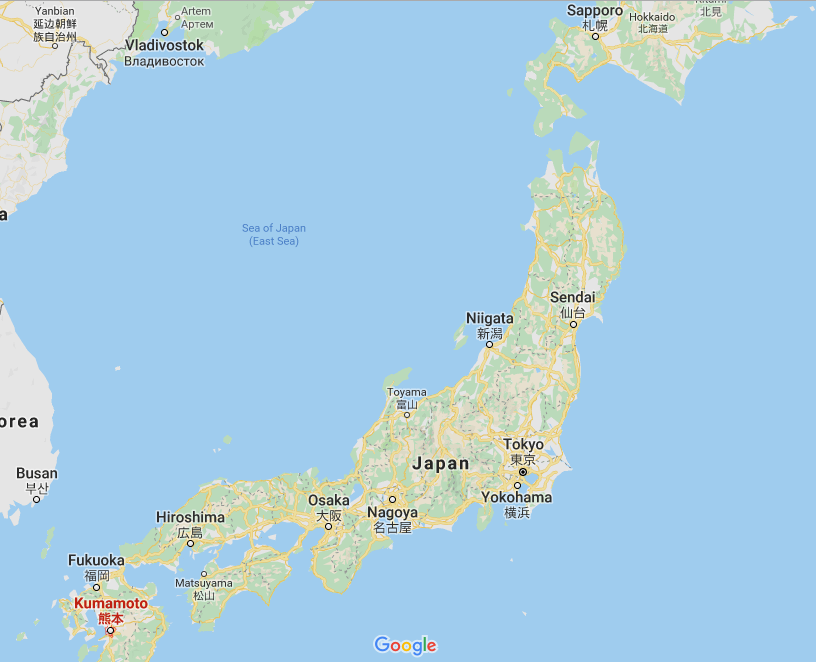 Neither of these islands has anything like the population of central Japan, which is the area bounded by Osaka, Yokohama, Niigata and Sendai on the map.

Even so, Kyushu Island has a population of almost 13 million as of Sep-2018, more than in Belgium, and the Prefecture of Kumamoto amounts to 1.82 million.

The city stands separate from the Fukuoka–Kitakyushu metropolitan area, despite their shared border.

The Prefecture, located in the central part of the island of Kyushu, has long been an administrative and economic hub and has been energetically promoting industrial investment. It is now home to numerous research and production facilities for the semiconductor and automobile industries. It also has a number of tourist attractions, but unfortunately one of them is a giant caldera, which was indirectly responsible for the 2016 earthquakes of up to magnitude 7.3.

Passenger traffic dipped dramatically in that year, but in all other years since 2010 – with the exception of 2011 – there has been consistent, if not spectacular, growth. 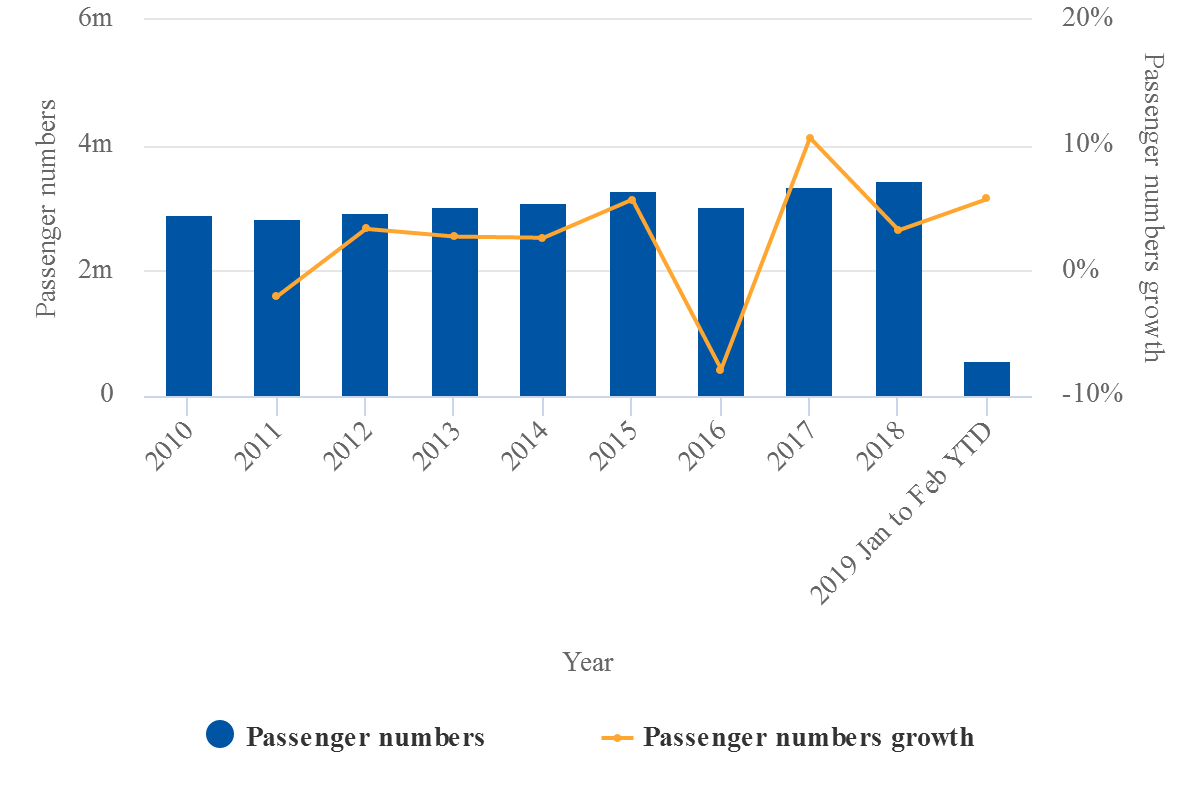 International capacity of 5% is there to be improved on

Most of the capacity at Kumamoto is on domestic routes, but 5% is on international markets and the concessionaire will be expected to improve that ratio. It will also be expected to attract low cost carriers (LCCs), as per the original brief.

In that sense, it could have a problem. As things stand, only 11.4% of capacity is on LCCs in the week commencing 22-Apr-2019. That is well below a national average of 17.4% for domestic LCC seats and an international average of 27.2% among airlines flying within or from/to Japan. 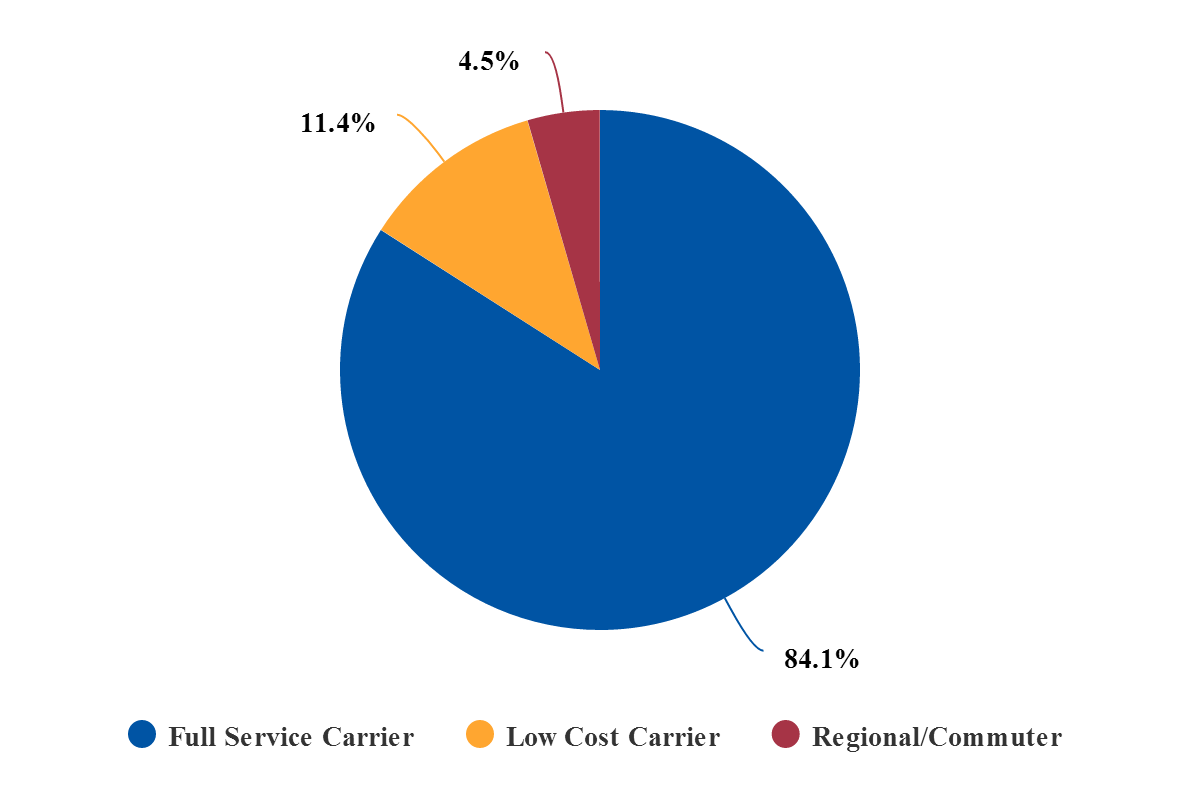 Things are not as bad as they were. The inbound tourism market to Japan has been booming and the LCC market has consequently been steadily taking hold.

At the same time, MLITT admits that it still has some way to go to convince the Japanese community – especially those in rural cities with entrenched attitudes where some of the airports are located – of the value of bringing in experienced global operators/investors. Many people in these areas would not distinguish between a vulture investor, who swoops in to buy bankrupt hotels and then leaves them barren a few years later, and an investor/ operator who can help unlock the growth potential of a region.

For a provincial airport of fewer than four million passengers annually, Kumamoto is well represented by airline alliances. While there is scarcely any SkyTeam representation, Star Alliance has 38.2% and oneworld 31.1% of capacity, respectively.

On the other hand, utilisation at the airport is impacted by a 12 midnight to 0700 curfew.

The MSJA-Kumamoto Consortium will now begin preparations to establish an SPC for the project and conclude a Project Agreement based on the Basic Agreement, in advance of the project’s scheduled start on 01-Apr-2020.