Kota Kinabalu Airport in east Malaysia should see a resumption of traffic growth in 2016 following two years of reductions. Malaysia’s second largest airport is quietly emerging as an international hub, fuelled by growth from mainland China.

Malaysia Airlines is opening a base at Kota Kinabalu in Apr-2016, which is expected to lead to nearly 30% traffic growth at the airport for the newly restructured flag carrier. AirAsia is also expanding at Kota Kinabalu in 2016, starting with a new daily service to Wuhan, its fourth Chinese route.

Kota Kinabalu also has seen the launch or resumption of service from three Chinese carriers in 2H2015. China is now the airport’s largest international market and will see further growth in 2016 driven by new flights from AirAsia, Malaysia Airlines and Chinese carriers. 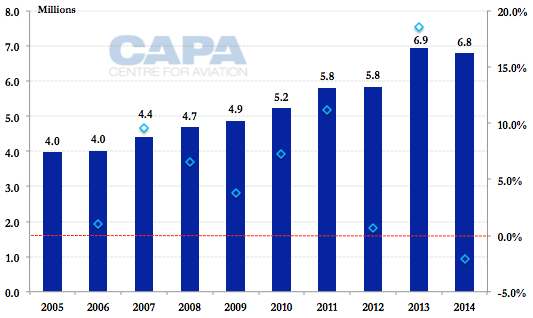 Malaysia Airports only provides monthly traffic data for its flagship airport, Kuala Lumpur International (KLIA), and the entire network. It does not provide monthly data for Kota Kinabalu or on any other secondary airport in its portfolio.

But capacity levels have slightly decreased at Kota Kinabalu in 2015, which indicates the airport could report another slight drop in annual passenger traffic.

Kota Kinabalu capacity has declined in 2015

There are currently about 175,000 weekly seats at Kota Kinabalu, based on CAPA and OAG data. This represents about a 6% reduction in seat capacity compared to late Dec-2014. Kota Kinabalu capacity levels fluctuate significantly depending on the season but generally year over year capacity has been flat or slightly down throughout 2015. 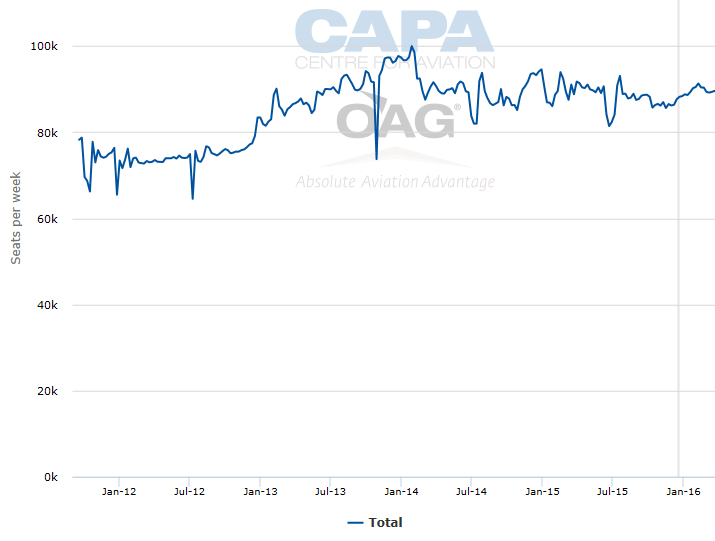 AirAsia is the market leader at Kota Kinabalu with about 86,000 weekly seats, giving it about a 49% share of total capacity. The group’s Malaysian short haul subsidiary currently operates an average of 33 daily flights from Kota Kinabalu to eight domestic and seven international destinations. AirAsia’s Philippine affiliate also operates four weekly flights to Kota Kinabalu from Manila while its Indonesian affiliate operates three weekly flights from Bali, giving the group a total of nine international destinations. 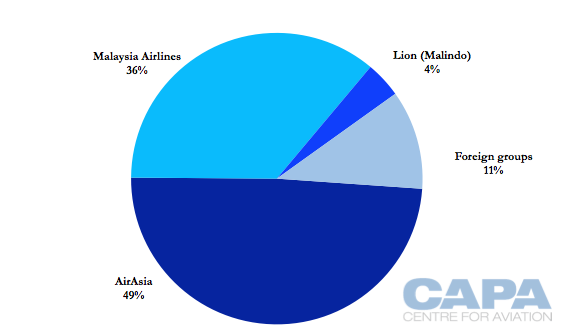 Both AirAsia and Malaysia Airlines have slightly reduced capacity to Kota Kinabalu over the last year. Malaysia’s third main airline, Lion Group affiliate Malindo Airways, is a minor player in the Kota Kinabalu market with just three daily flights (all from Kuala Lumpur) and a 4% share of total seat capacity. 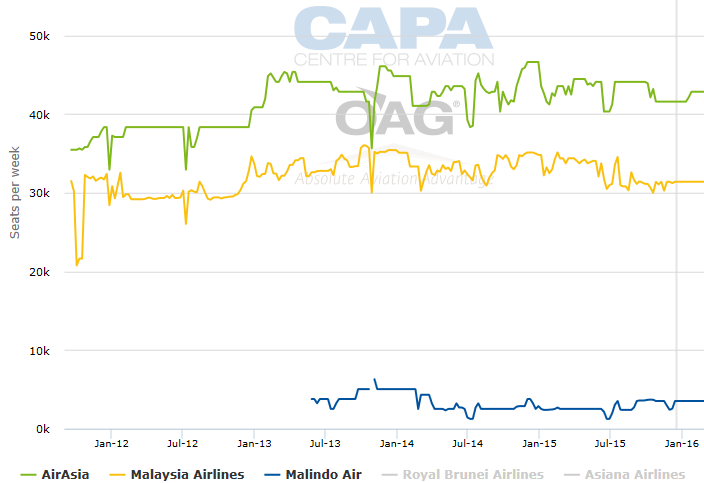 The additional 460,000 passengers represents 27% growth for Malaysia Airlines over its current Kota Kinabalu numbers. The 460,000 additional passengers also represents 7% growth for the airport overall. A further increase in Malaysia Airlines traffic at Kota Kinabalu is likely for 2017 as the new flights added in 2016 will be implemented in 2Q2016. There will also be more possible new flights launched in 2017, particularly if the new base performs well.

CAPA will examine the expansion and new hub plans of Malaysia Airlines for Kota Kinabalu in a separate report. This report focuses on the overall Kota Kinabalu market, including expansion from AirAsia and foreign carriers.

Malaysia AirAsia also has been looking at opportunities to expand at Kota Kinabalu along with other secondary Malaysian cities. The LCC has been evaluating several potential new domestic point to point routes as well as new routes connecting secondary Malaysian airports with mainland China.

Its largest international route from Kota Kinabalu is Hong Kong, which is served with two daily flights. AirAsia’s other five international routes from Kota Kinabalu includes one daily flight to Singapore and Taipei, four weekly flights to Manila and three weekly flights to Jakarta and Bali. (As previously mentioned, Bali is operated by Indonesia AirAsia and Manila by Philippines AirAsia.)

AirAsia could pursue further expansion from Kota Kinabalu later in 2016, particularly as its main rival plans is own expansion.

AirAsia has had a base at Kota Kinabalu for several years and currently has six A320s based at the airport. AirAsia began offering its Fly-Thru transit product at Kota Kinabalu at the end of 2014 as the group saw an opportunity to use Kota Kinabalu as an alternative hub for connections from China to Southeast Asia. As CAPA highlighted in Oct-2014:

Kota Kinabalu is located in east Malaysia, making it an ideal connection point for flights from North Asia to Southeast Asia. AirAsia currently serves five cities in greater China from Kota Kinabalu – Guangzhou, Hangzhou, Hong Kong, Shenzhen and Taipei. All these destinations are also served by AirAsia or AirAsia X from Kuala Lumpur but the flight times from Kota Kinabalu are one to two hours shorter.

AirAsia will be able to offer connections via Kota Kinabalu between Greater China and several destinations throughout Malaysia as well as Bali, Jakarta and Singapore. Load factors on Kota Kinabalu routes will likely improve and there could be enough incremental traffic to justify more capacity on existing routes as well as potentially new routes which would not be sustainable without transit traffic.

In addition to the new Wuhan service from AirAsia and new charter flights from Malaysia Airlines, Kota Kinabalu's China traffic will be boosted in 2016 from recently launched services from Chinese carriers.

International capacity at Kota Kinabalu has increased by 7% over the last year to 45,000 weekly seats. The increase has been driven by the launch of services by four foreign airlines, including Korea’s Jin Air and three Chinese carriers: Spring Airlines, China Southern and Shanghai Airlines.

Several Chinese carriers reduced capacity and suspended routes to Malaysia in 2014 as visitor numbers dropped sharply following the MH370 incident. The China-Malaysia market has recovered in recent months, prompting Chinese carriers to resume suspended routes to Malaysia and in some cases launch entirely new routes. While most of this additional capacity has been allocated to Kuala Lumpur, Kota Kinabalu has also become a hot destination for the Chinese.

Kota Kinabalu will likely see more new and increased services from Chinese carriers in 2016 along with the new China flights from AirAsia and Malaysia Airlines. There will be about 7,000 weekly one-way seats in the Kota Kinabalu-China market after AirAsia launches the Wuhan service in late Jan-2016. 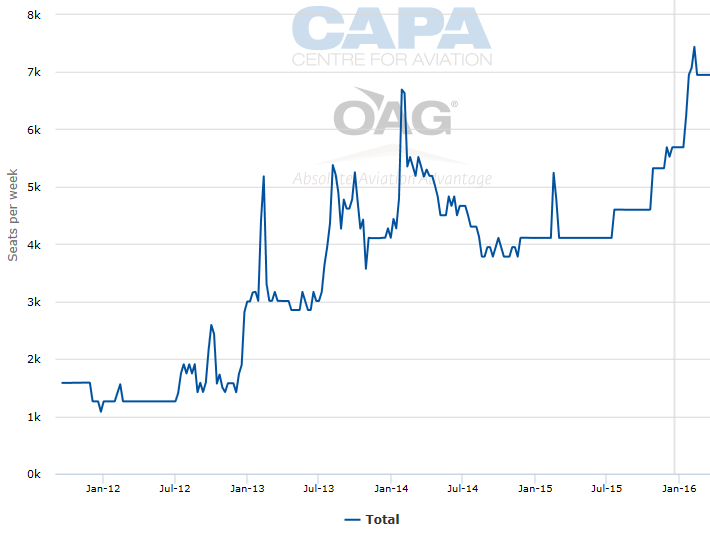 China is already the largest international market for Kota Kinabalu and currently accounts for about 25% of total international capacity.

China is the largest source market for the Sabah tourism industry, accounting for 305,000 visitors in 2014 or 31% of total visitor arrivals. Visitor arrivals from China were down 15% in 2014 but were up 87% in 2013 and will likely be up again in 2015 – with even larger increases for 2016 – as the overall Malaysia-China market has recovered. (These figures, published by Sabah Tourism, include residents of China, Hong Kong and Macau but excludes visitors to Sabah which initially arrived and cleared immigration at other Malaysian airports.)

South Korea is the third largest source market for Sabah after China and Indonesia, accounting for 106,000 visitors in 2014. But South Korea is the second biggest international market for Kota Kinabalu Airport as a large portion of Indonesian visitors arrive by road. (Malaysia shares the island of Borneo with Indonesia and Brunei.) 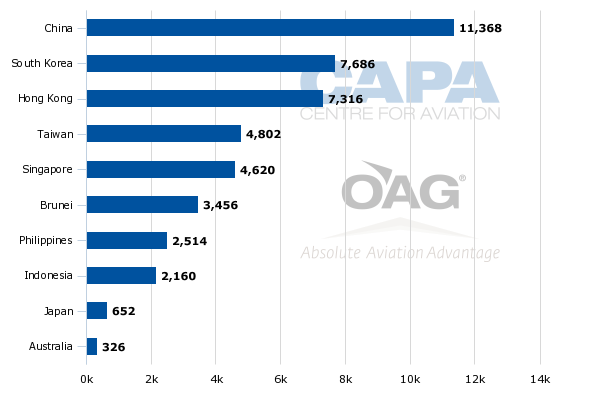 The four new foreign carriers has resulted in a 50% increase in the number of foreign airlines serving Kota Kinabalu, an indication of growing inbound demand particularly from China and South Korea. Of the eight existing foreign carriers in the Kota Kinabalu market two were also from South Korea (Asiana and EastarJet), one was from Hong Kong (Dragonair) and the other five from Southeast Asia (Cebu Pacific, Philippines AirAsia, Indonesia AirAsia, Royal Brunei Airlines and SilkAir).

These eight carriers' combined capacity levels have been roughly flat over the last year. Five of the carriers have not increased or decreased capacity to Kota Kinabalu; Royal Brunei Airlines and SilkAir have reduced capacity but this has been offset by an increase from EastarJet.

Jin Air, Dragonair, Royal Brunei and SilkAir are currently the only foreign carriers serving Kota Kinabalu daily. Royal Brunei is the only carrier with more than seven weekly frequencies.

Royal Brunei currently has 12 weekly flights on the very short Kota Kinabalu-Bandar Seri Bagawan route, making it the largest foreign carrier in the Kota Kinabalu market. Royal Brunei promotes Kota Kinabalu as a twin destination with Brunei, offering packages that are mainly sold in North Asia. Most of its Kota Kinabalu passengers do not originate in Brunei.

Of the 1.6 million international passengers handled by Kota Kinabalu in 2014, 69% or 1.1 million arrived on flights from North Asia. But the actual figure of North Asian passengers is likely higher given that a large share of the airport’s North Asia traffic arrive on one stop flights via other Southeast Asian airports.

About 30% or about 500,000 international passengers handled by Kota Kinabalu in 2014 arrived on flights from other countries in Southeast Asia. The remaining 1% was from Australia and the Middle East. The very small number of Middle East passengers were likely carried as part of religious pilgrimage charters to Saudi Arabia. 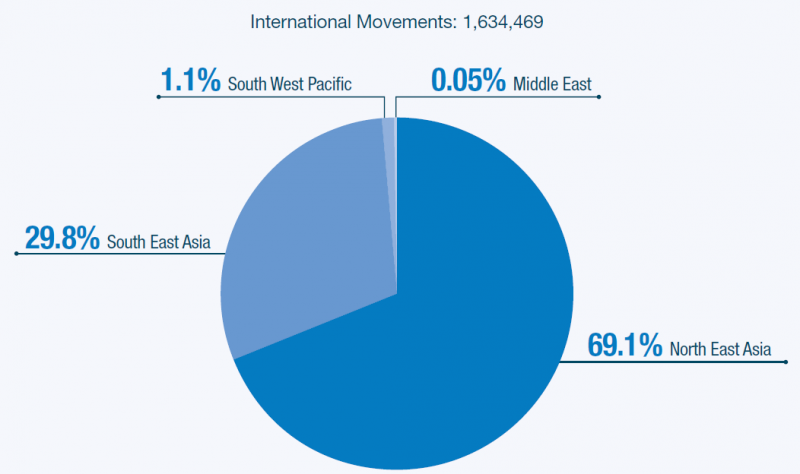 North Asia, in particular China, is expected to be the main source of international growth in 2016 and beyond. Kota Kinabalu will also likely see a resumption of domestic traffic growth in 2016, driven in part by international passengers making domestic connections within east Malaysia. Kota Kinabalu’s potential as a hub will be examined in more detail in the next part of this report.