Kosovo’s aviation market is steadily expanding with increasing traffic at the country’s only commercial airport, particularly from western Europe. Further increases may come with the recent signing of an air services agreement with the UAE which would see an entirely new region connected to the country. Kosovo’s aviation industry has been steadily growing over the past five years with a number of western European carriers adding capacity to the small south-eastern European nation.

Kosovo is a relatively young nation, officially declaring independence from Serbia in 2008 though its market and traffic has been separate from Serbia since the 1999 North Atlantic Treaty Organization (NATO) war. Kosovo has a population of approximately 1.74 million, according to a recent census conducted by the Kosovo Statistics Agency, with approximately 200,000 in its capital, Pristina. The country’s only international airport is at Pristina. 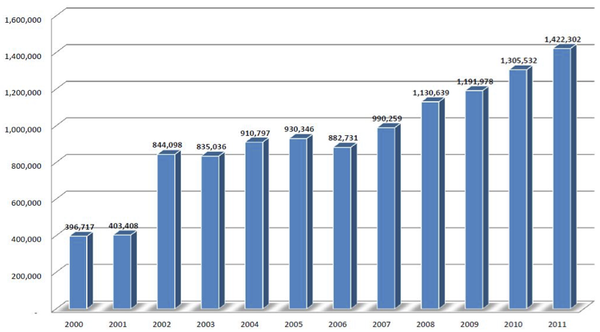 No true national carrier for Kosovo

The country’s national carrier, Kosova Airlines, was established in 2003 by the United Nations Interim Administration Mission in Kosovo (UNMIK). But the airline’s only aircraft, a Boeing 737-700 wet leased from Hamburg International, was returned to its owner in May-2006, leaving the airline with no aircraft. Since then Kosova Airlines has remained operational through the sale of Germanwings and airberlin-operated services. As it no longer operates its own services, this makes the airline a virtual carrier.

A second virtual carrier, Air Prishtina, is also in operation. It has strategic agreements with other airlines including SAS Scandinavian Airlines and Belle Air Europe.

Difficulties in sustaining local carriers in this region is very common with the existing flag carriers of the former Yugoslavian nations of Bosnia and Herzegovina, Croatia, Montenegro, Serbia and Slovenia having all struggled financially in recent years. Meanwhile the national carrier of Macedonia failed in 2009 and was not revived.

Three quarters of capacity at Pristina is to western Europe

In 2011, Pristina was served by 31 airlines, including charter carriers. Swiss charter carrier Edelweiss was the largest carrier in Pristina in 2011, providing over 200,000 seats, according to CAAK data.

In 1H2012, Edelweiss was the second largest carrier at Pristina as its traffic dropped 21% to 81,609 passengers. Low-cost carrier Germanwings was Kosovo’s largest carrier in 1H2012 as its traffic jumped by 142% to 92,214. Germawings currently serves the Kosovo capital from five cities in Germany – Berlin, Dusseldorf, Hamburg, Hannover and Munich.

Star Alliance member Adria Airways is the largest eastern European carrier serving Kosovo. But over half of its capacity at Pristina is allocated to western European routes. Adria Airways now links Pristina with Frankfurt, Munich and Verona as well as with its Ljubljana hub in Slovenia. 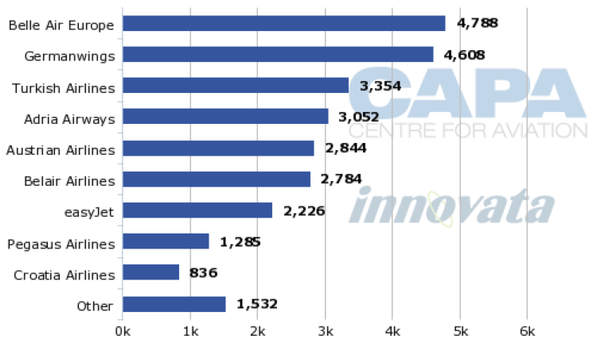 Overall 13 carriers currently operate scheduled services to Pristina from 25 destinations throughout Europe, according to Innovata data. 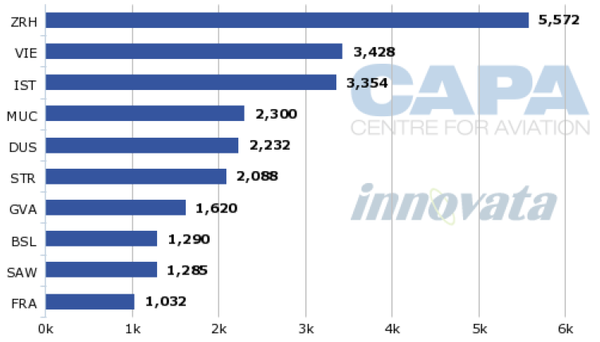 Present in Pristina are five low-cost carriers, which account for about 35% of overall capacity at the airport (and country). This fluctuates week to week based on the level of charter operations at Pristina.

While existing carriers such as Germanwings, Adria and Belle Air Europe have expanding significantly so far this year, there have been little in the way of new scheduled routes to Pristina in 2012. On 28-Jan-2012 Adria Airways launched twice weekly Verona-Pristina service. This route is now scheduled to continue through winter 2012/2013. Germanwings launched on 30-Jun-2012 weekly seasonal Basel-Pristina service, which operated until 01-Sep-2012, competing with easyJet on the route. The route is still operated four times weekly by easyJet.

Links from Kosovo to the Middle East may be in the pipeline following the signing of a bilateral air services agreement between Kosovo and the UAE in mid Sep-2012. The agreement includes no restrictions on routes, capacity, frequencies or types of aircraft and allows for the exercising of fifth freedom traffic rights. In addition to this, both sides agreed to allow unrestricted non-scheduled and charter operations between the countries. Emirates, Etihad Airways, Air Arabia, RAK Airways and Flydubai were designated to operate services to the country.

Air Arabia met with the CAAK and the Kosovo Ministry of Infrastructure on 26-Sep-2012 regarding the potential launch of twice weekly Sharjah-Pristina service in winter 2012/2013. Securing service from Air Arabia would be a significant development for Kosovo as it would be the first carrier from outside Europe serving Kosovo. Air Arabia would also be the sixth LCC serving Pristina.

Kosovo’s future outlook appears bright as the traffic increases seen at Pristina International Airport over the past five years will likely continue at a similar or greater rate. While it is unlikely a new national carrier will be launched in the near future, it is a possibility as traffic to and from the small eastern nation continues to increase. The signing of an air services agreement with the UAE could lead to additional growth at the airport with both full service and low-cost carriers from the UAE potentially entering the Kosovo market.