Shares in Korean Air and Asiana Airlines rebounded 2.2% and 1.5%, respectively, on Thursday, as the broader Korea Composite Stock Price Index (KOSPI) rose 2.2% after jitters at the start of the week over the North Korean nuclear test. Wall Street’s solid lead overnight could pave the way for another rise on the KOSPI today, though airline stocks could come under pressure from higher oil prices.

AirAsia revealed solid earnings in the March quarter, but investors were expecting even more. The LCC’s shares eased 2.3%.

Virgin Blue gave up almost half of Wednesday’s 9.3% gains, falling 5.1% yesterday as the carrier stated it would consider further domestic capacity cuts in its upcoming financial year commencing 01-Jul-2009.  The planned 2.4% reduction in capacity could swell to around -5.5%, according to CEO, Brett Godfrey. Qantas’ shares eased 3.1%. There are growing concerns about the swine flu outbreak in Australia. The number of cases in Australia has surged to over 100. Qantas meanwhile has today released its Apr-2009 traffic showing further considerable weakness in international yield. 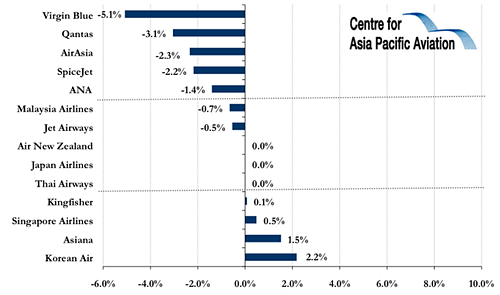 Source: Centre for Asia Pacific Aviation & Reuters
NB: It was a public holiday in China yesterday.