Korean Air and Asiana Airlines defied a 0.4% fall in the South Korean Kospi Index yesterday, as investors become increasingly optimistic about rising demand and the earnings outlook. Their stocks both rose 5% on Wednesday on expectations for strong traffic in May – a month including several public holidays in Korea.

Jetstar spreads its wings in Singapore

Qantas' shares eased 1.9% as its low cost unit, Jetstar, confirmed plans to base two A330-200s in Singapore to launch long-haul services to Australia, North Asia and Europe from late 2010. Destinations have yet to be finalised, but pre-sales for at least two routes will commence shortly, once discussions with destination airports have been finalised.

Shares in China Southern fell a further 4.8% yesterday, while Hainan Airlines lost another 3.8%. 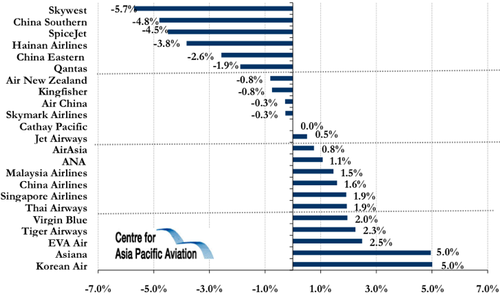