The market between Korea and Taiwan is woefully small; the total size from all airlines, LCCs and full service, equals the amount of LCC capacity between Japan and Korea.

This is the result of the lack of liberalisation between Korea and Taiwan for the main Seoul-Taipei route. In the face of restrictions, smaller airports are partnering with LCCs to generate new city pairs that are not subject to bilateral restrictions. The number of city pairs between Korea and Taiwan is expanding, and so too is the overall market – but mostly because of LCCs.

Since 2016, full service airlines have slightly decreased capacity between Korea and Taiwan, whereas LCCs have expanded and grown the overall market. LCCs have amassed a 37% market share between Korea and Taiwan. CAPA's LCCs in Northeast Asia summit in Seoul in Jun-2018 will explore these markets, as well as airline-airport partnerships and growth opportunities for Korea's existing LCCs and the large list of start-ups.

Korea-Taiwan market has doubled since 2013

Available seats between Korea and Taiwan have doubled since 2013. LCCs have driven growth, especially in recent years. 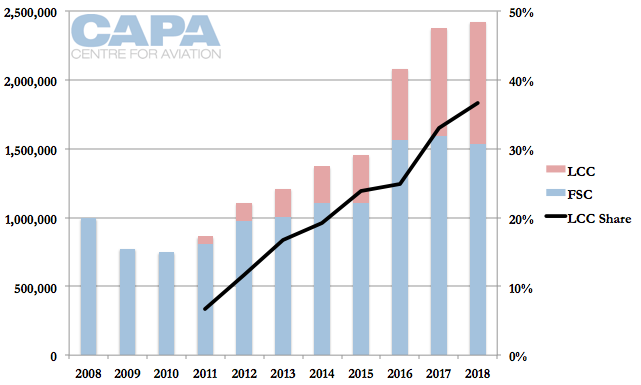 Lack of Korea-Taiwan open skies has restricted the market 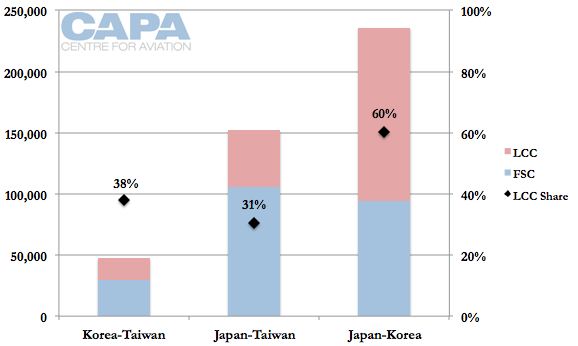 China often pressures foreign airlines to restrict their flights to Taiwan. Some airlines will quietly add a flight to Taiwan only after making a bigger celebration of more PRC flights. Some airlines are not serving Taiwan at all, for fear China will not grant them more traffic rights.

Korea fears liberalisation with Taiwan will prevent developments in the Korea-China market, which naturally has far bigger opportunities.

There is a contrast with Japan, which signed an open skies agreement with Taiwan. There are broadly two key differences: first, Japanese airlines are not as reliant on service to China as Korean airlines are; second, Japan had larger diplomatic clout to liberalise with Taiwan and stand by its decision.

For the second consecutive year, the Korea-Taiwan market has no airport pairs exclusively served by full service airlines. This reflects LCCs entering downtown airports (Seoul Gimpo and Taipei Songshan) despite operating restrictions and protectionism. Although not an exact comparison, this is in contrast to some markets (London Heathrow-Paris CDG, Tokyo Haneda-Seoul Gimpo) that for various reasons are not served by LCCs at all.

Of the nine airport pairs in the Korea-Taiwan market in 2018, four are served exclusively by LCCs while at the remaining five there is overlapping service from both LCCs and full service airlines.

As recently as 2012, full service airlines had four airport pairs entirely to themselves. LCCs first entered the Korea-Taiwan market in 2011. 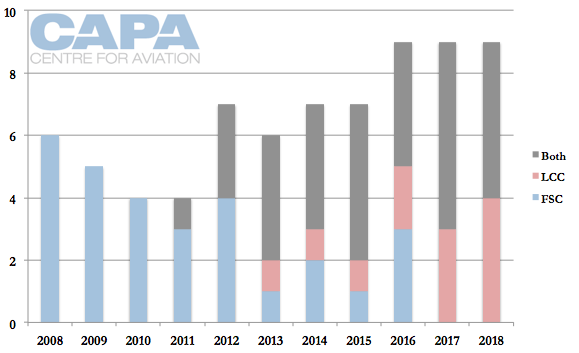 It is through the growth of LCCs that airport pairs in the Korea-Taiwan market are expanding. This brings more consumer choice and greater economic contribution, but also spreads the impact of aviation across more communities.

In Northeast Asia there has historically been a high concentration of flights in a handful of cities. The LCC expansion wave in Europe, and to some extent in Southeast Asia, has enabled airport pair growth and spread aviation's benefit.

Smaller airports in Korea and Taiwan are becoming more savvy at attracting airlines and new services – and not just because of incentives and subsidies, although these help. Airports have been able to break the inertia at many airlines, which meant that small airlines focused on large and often overcompetitive (or inaccessible) markets.

It is true that if there was greater capacity (let alone open skies) for the Taipei-Seoul route in the Korea-Taiwan air service agreement, LCCs in both Korea and Taiwan would have larger presence in the trunk Taipei-Seoul market than they currently do. Some secondary Korea-Taiwan services may not be offered as a result, but this market would still eventually develop. LCCs are usually constrained more by aeropolitics and infrastructure than they are by aircraft availability, although pilot costs are a growing expense.

With Korea-Taiwan liberalisation, airlines would not shift secondary city services to trunk routes; rather, the overall market will grow.

Trunk routes still dominate the Korea-Taiwan market. Of the routes operated, 61% of seat capacity is in the Seoul-Taipei market and 19% is in the Busan-Taipei market. The fourth largest city pair includes a secondary city: Korea's Daegu, with service to Taipei. 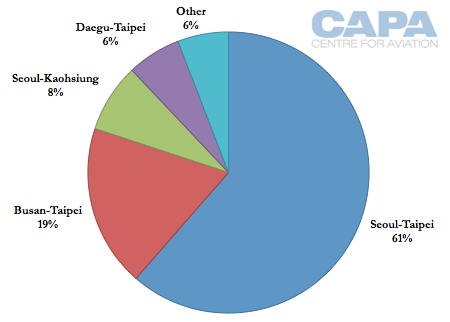 In more recent times, Daegu has taken the initiative. Daegu has benefitted from congestion in both Seoul and Busan. Daegu has used its geography – located approximately between Seoul and Busan – to capture traffic that would have travelled on land to another airport. 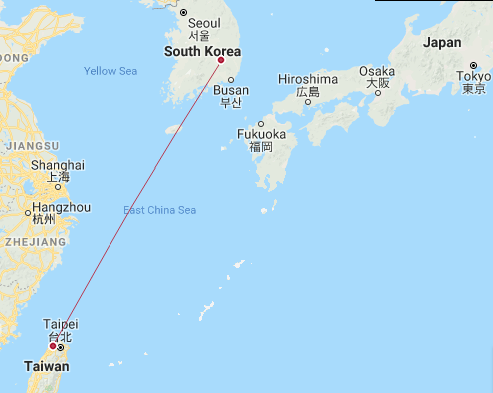 CAPA gathers aviation leaders in Seoul on 11/12-Jun-2018 to discuss LCC developments in Northeast Asia. Session two on 11-Jun-2018 discusses partnerships between airports and airlines to establish new hubs and focused cities and to grow services.