Korea Airport Corporation has, during the last few years, been noted for developing a deep interest in operating airports in South America – specifically Ecuador.

But it has also had its eye on the main chance in Southeast Asia where it feels it can add value.

Having just completed a feasibility study for the expansion of Laos’ second largest airport, in its main tourist city, it is now seeking a formal PPP contract with the Laotian government.

Laos may need to replace its usual main source of tourists, from China, and one potential benefit of a deal with KAC is an economic spin-off, which might result in Korean firms investing in Laos.

In Dec-2021, in KAC resumes talks with Ecuadorian government on Manta Airport, (which was a CAPA report on Korea Airport Corporation’s [KAC] discussions with authorities in Ecuador over airport concessions there), it was mentioned that KAC had unexpectedly announced that Laos' Ministry of Planning and Investment had selected KAC to undertake a feasibility survey for the expansion and improvement of Luang Prabang Airport, which would be the first such project by any Korean firm in Laos.

Situated 300km north of the Laotian capital, Vientiane, in a rural province of north central Laos, and literally meaning "Royal Buddha Image", Luang Prabang was once the Royal Capital of the Kingdom of Laos (until 1975), and 33 of its 58 constituent villages together comprise the UNESCO ‘Luang Prabang World Heritage Site.’

Indeed, the entire city is accorded WHS status, which is rare. It was listed in 1995 for unique and "remarkably" well preserved architectural, religious and cultural heritage.

The country’s leading tourism destination, and now being included on regional package tours

Luang Prabang is the country’s second largest city after the capital, Vientiane, as well as being the leading tourist destination, so the supporting infrastructure (hotels etc., though they tend to be small ones rather than large chain hotels) is already in place, as well as the location having many attractions. Additionally, it has a rich culinary history.

China is the main visitor provider

In 2019 Vietnam contributed 19% of visitor arrivals and China alone contributed 21% – which must be of some concern to the local economy, because China seems yet again to be ‘locking down’.

On the other hand, Vietnam’s air transport network is recovering to 2019 levels, and as the chart below shows, there is at least the building block of tourism from western countries.

Meanwhile, Korea was the fourth largest provider of tourists in 2019 but with only 4% of the total. “Exchanges” between the two countries are said to be increasing.

Laos – visitor arrivals by market for 2019

In regular competition with Thailand for visitors

Tourism does appear to be the mainstay of the economy, although it can fluctuate wildly.

For example, in 2016 visitor numbers to the whole country were impacted negatively by an aggressive marketing campaign by Thailand, which encouraged regional tourist visitors to travel throughout that country rather than to make side trips to other countries.

While there are special economic zones around the country, including in Luang Prabang, industry is not as important to the economy generally as is agriculture, which still accounts for more than 50% of GDP.

The Lao government has recently designated the tourism industry as one of the six key tasks of the ninth five-year (2021-2025) social development plan, and is fostering the tourism industry nationally by developing eco-friendly tourism and establishing infrastructure improvement strategies.

A special economic zone for tourism is being created.

KAC is the operator of domestic vacation-oriented airports

Presumably KAC had been selected for that feasibility survey contract (in cooperation with Dohwa Engineering) on the basis of its experience within South Korea itself, where it operates 14 airports (including the one on the holiday island of Jeju, which is actually the country’s second busiest). 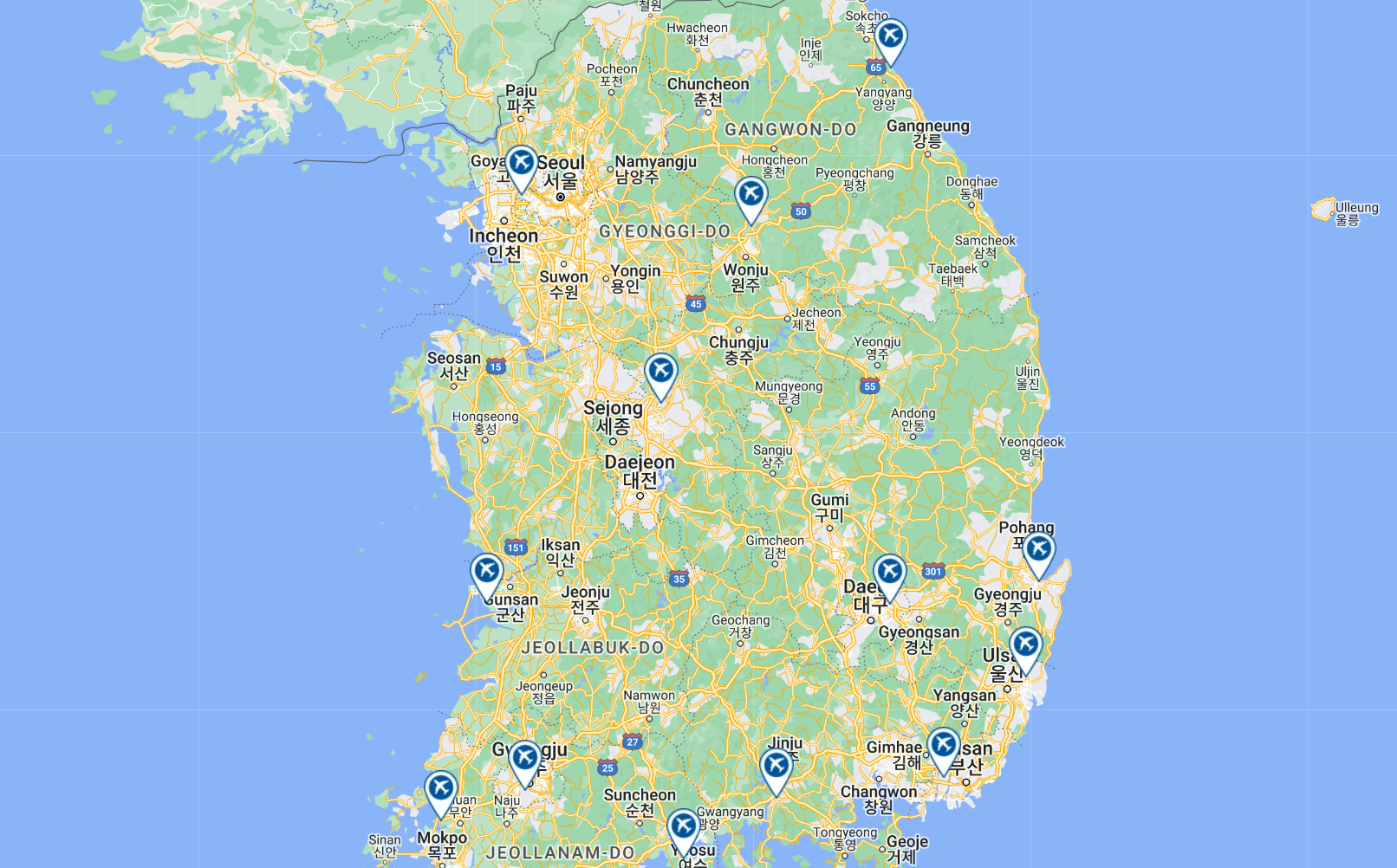 Although the survey was only a feasibility study, CAPA speculated at the time that the expectation must be that any contract for expansion and improvement would be offered to KAC as first option if the Laotian government was happy with the report.

Bid for a PPP contract is confirmed

And that does, indeed, seem as if it might be the case.

On 17-Nov-2022 KAC confirmed that it was now seeking to secure the public-private partnership (PPP) contract to develop and operate Luang Prabang Airport.

The project is valued at approximately KRW200 billion (USD150.4 million).

KAC presented its development plan for Luang Prabang Airport at a briefing with representatives of Laos' government. The proposed facility improvements would cover the runway, taxiway, apron, traffic forecasting, route development (especially international), ‘smart airport’ introduction strategies, commercial facilities and connecting roads, as well as “the right to operate the airport in the future” – which hints at an attempt to secure a lengthy concession platform.

In a subsequent press release KAC described itself as being “spurred on” to securing the rights to develop and operate the international airport, while “paying attention to local interest,” which presumably means ensuring that the needs of visitors do not overwhelm those of local inhabitants.

Hyung-joong Yoon, CEO of Korea Airports Corporation, said, “We will secure the right to operate the PPP business through a differentiated strategy of the corporation in connection with the regional development master plan around the airport”.

Hoping for an economic spin-off

If KAC does operate Luang Prabang Airport, which can currently accommodate 1.2 million passengers annually, it says it will not only improve accessibility between the two countries through the development of direct routes with Korean airports, but also lead domestic private companies to enter overseas markets through public-private cooperation. It will be able to play a bridging role in exchanges between Laos and Korea.

That is similar to the approach KAC took in Ecuador, proposing itself as an ‘open sesame’ to industry and commerce. But there it has not yet been successful, seemingly winning a concession contract to operate the Manta Airport there, then having it taken away, and then being offered an opportunity to re-bid.

What sort of airport would KAC be taking on?

Basic maintenance would, unusually, be an essential aspect of KAC’s commitment under the terms of any contract.

The airport’s director, Songban Sisopakorn, complained recently that, "...the airport's maintenance work has been in a vacuum for a considerable period of time as air demand has decreased due to the coronavirus."

Luang Prabang is one of only three international airports in Laos. It is located approximately four kilometres (2.5 miles) from the centre of the city. Formal passenger numbers are not accessible, but they may be less than 250,000 per annum.

The airport underwent expansion work in 2013, when it was upgraded and the runway extended to its present 2500m.

Historically the airport has been a regional hub,...

Luang Prabang is, or has been in the past, a regional hub for international flights to Bangkok, Chiang Mai and Siem Reap and other cities such as Vientiane and Phongsali. 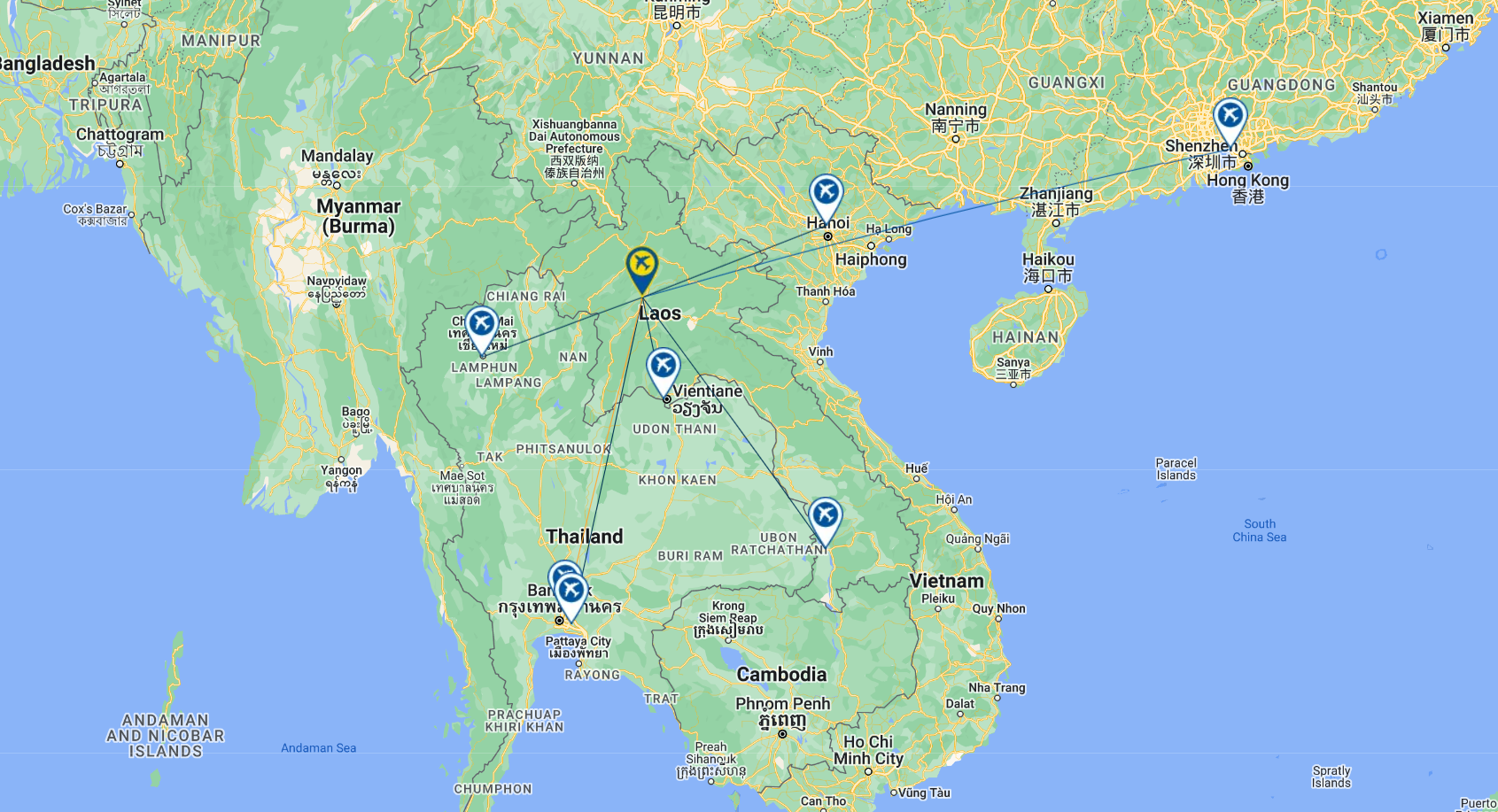 ...but has been very slow to recover from impact of the COVID-19 pandemic

The airport having been crippled by COVID-19, as was the case in Thailand, capacity recovery began only in 4Q2022, and in the week commencing 21-Nov-2022 stood at only 30% of what it was in the equivalent week of 2019.

That does not compare well with, for example, Chiang Mai, a tourist-oriented town in northern Thailand, where the capacity has reached 60% of 2019 levels.