The carrier stated the additional capacity is required to meet "growing passenger and cargo demand and a rapidly expanding route network". The aircraft will be leased from Jetscape, an Embraer aircraft leasing company.

Meanwhile, 1Time (+1.9%) moved from the Altx index to the main board of the Johannesburg Stock Exchange on 05-Jul-2010, with the company stating it hopes to attract institutional investors as a result. CEO, Glenn Orsmond, stated the company is not deterred by warnings of a possible double-dip recession, stating the LCC has done well in the recessionary conditions.

Middle Eastern shares were across the board with Air Arabia (-0.5%) down, Kuwait National Airways remaining steady while Royal Jordanian (+0.6%) and Jazeera (+1.9%) shares were on the rise. 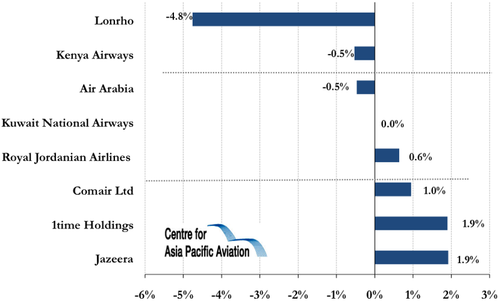